Posted by truecrimegames on Nov 6th, 2019

It seems like a no-brainer to combine the phenomenon that is Pokémon Go with the trendy popularity of true crime, and that’s exactly what Misadventure in Little Lon does. This location-based, augmented reality (AR) mobile game asks players to help solve a century-old crime by walking the real-world streets of Melbourne, Australia, and talking to virtual characters. New Atlas donned a deerstalker, hit the streets and went hands-on with Little Lon. 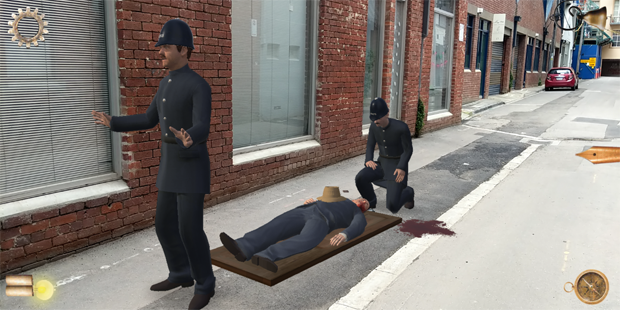 Misadventure in Little Lon applies that technology to a clever new setting – a historical walking tour and interactive murder mystery. Starting at Melbourne’s beautiful State Library Victoria, players are guided between heritage buildings, bustling corners and seedy alleys, where they interview a series of shady characters and search for clues.

The game is the first in the True Crime Mysteries series by indie studio 10Tickles, helmed by husband-and-wife team Andy Yong and Emma Ramsay. The couple are both fascinated by true crime, history and the city of Melbourne itself, and so set out to build an augmented reality experience that tapped into all three.

Misadventure in Little Lon is based on a real-life crime that took place in the alleys around Little Lonsdale Street (hence the name), circa 1910. Ernest Gunter was hospitalized and later killed in what seem like bar fights – but what exactly happened is complicated. Was it self-defense? Revenge? A mob hit? It all depends on who you ask. 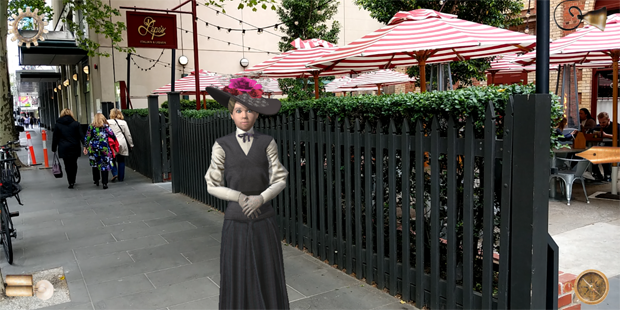 If you’re in Melbourne, the game is best played by physically walking around the city, talking to virtual characters on real street corners close to where the actual events went down. There’s something magical about interviewing Gunter on your phone as he stumbles out of hospital, only to look up at the old building you’ve walked past countless times and notice a sign saying it was indeed a hospital 100 years ago.

While it’s a fantastic way to give you a new appreciation for the city, the team doesn’t limit itself to locals. There’s also an off-site version that can be played anywhere, which still impresses based on the AR tech alone.

Rather than just having characters float in front of your camera feed no matter where you move (*cough* Pokémon Go *cough*), the game is smart enough to keep track of where you are in relation to them. They’ll stay right where they are, and your perspective on them will change as though they’re standing right there. That goes a long way towards selling the illusion of AR.

There’s more to interacting with characters than just trying to peer up their nose or walk around behind them, though. There’s a list of questions you can ask each character, to try to get more information out of them. If that doesn’t work, you might have to give them an item from your inventory. The news boy, for instance, won’t tell you anything until you throw him a penny, and offering your lighter to a smoking man helps get him on your side. In those cases, physically reaching your phone towards the virtual character is a nicely immersive touch.

Other times, you have to search for clues in the same manner. In one scene, to identify the victim you’ll need to physically walk around the area with your phone pointed at the ground, looking for their lost wallet. 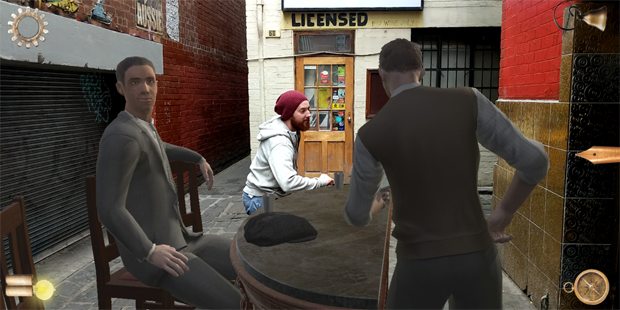 There were a couple of minor bugs – the location tracking sometimes seemed to lose track of where we were, and at times the scene froze on-screen, no matter where we pointed the phone. But they were far from deal-breakers, and I can’t really be sure whether the game or my aging phone was to blame. Either way, it's easy to forgive them as teething problems for an exciting new idea.

The other big selling point is the historical attention to detail. Not only is the story based on a real crime, but it’s designed to match up closely with the real-world locations where each event went down. Artist Andy Yong modeled and animated the characters based on real-life photos where possible, and the team worked closely with local historians to uncover the full scoop on the story.

“Together we did a lot of research on locations, the background of the witnesses involved, the coroners report and many newspaper articles about the events,” Emma Ramsey, designer and producer of Little Lon, tells New Atlas. “When you're playing the game the things which seem the most far fetched are most likely what was true – we've included the actual newspaper articles in the game for reference.”

The team even worked with the direct descendants of the people involved. Maud Gunter is the sister of the deceased, and a strong, enterprising woman who becomes one of the central characters in the game. To get a more rounded understanding of her, the team consulted her granddaughters, Jenny Samms and Gail McCormack.

“Having the family input was amazing in terms of the narrative development and ensuring we were showing the many sides of Maud,” Ramsey tells us. “She went on to become a powerful and influential woman in Little Lon, she had strong ties to the Chinese community, organized a combine with the other brothel owners and went on to run 27 brothels in the Little Lon area and beyond. She could also doing flying kicks and used a hatpin as a weapon.” 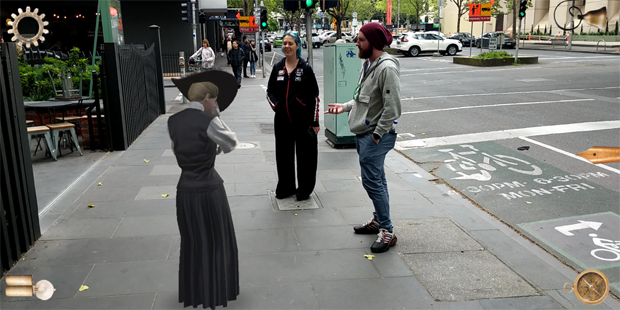 All up, Misadventure in Little Lon is a fantastic and unique use of AR that’s worth the stares of curious passersby. And it really goes to show how deep the well of possibilities is for this technology. We never would have thought to ask for a story-driven, location-based AR game – but now that we’ve tasted it, we’re excited for more.

And it looks like we’ll be getting more soon. 10Tickles is already planning a second story for Melbourne in 2020, based around an intriguing true crime tale about a fortune teller and a phrenologist in an 1890s marketplace. After that, the team hopes to expand to other history-rich cities such as Sydney, London and New York.

Misadventure in Little Lon is available now on the iOS App Store and Google Play. A free trial gets you the first few scenes, while the rest are unlocked for AU$4.99 (US$3.49).