New version of the mod was uploaded, with a working support for reforming Iconoclasm and Manicheism.

I wanted to start out by saying I have good news, and bad news. Which do you want to hear first?
That was a trick question. This news item was written beforehand, so I'm giving you the good news first anyway.

The good news is, a new version has just been released! This time, two heretical reformation should be working, allowing at least some of your heretical monarchs to establish their version of religion as a major player in medieval Europe (or rather, Middle East in the case of these two).

To show you how such a reformation occurs, I prepared a short tutorial basing it on how Iconoclasm does it. 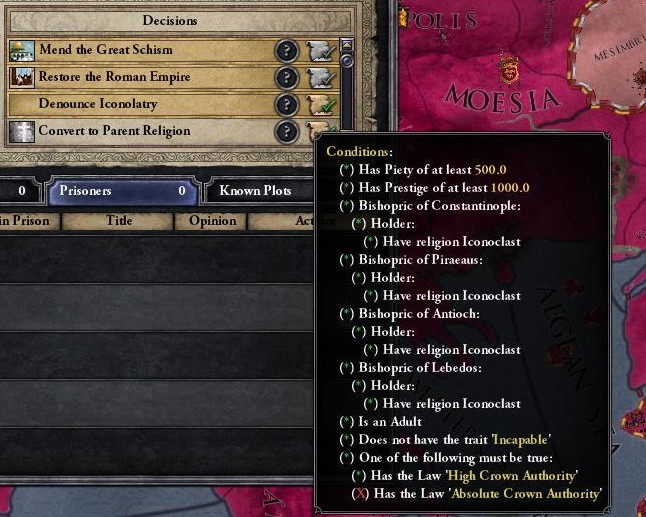 On this image, you can see that a prospective ruler must fulfill some rather strict conditions to be able to enact this decision. However, this is only to be expected - you are, after all, telling the established clerical hierarchy they've got it all wrong when it comes to religion. To even have the decision to show up, you have to be the Byzantine or Roman Emperor who follows an Iconoclastic version of Eastern Christianity. This condition was created to reflect Byzantium's long history of struggles with Iconoclasm, and the support of a few Emperors in the past.

Once the decision shows up for you, you have to make sure you don't make the mistakes of previous Iconoclast Byzantine Emperors and actually put Iconoclasts on a few prominent positions. You have to be a prestigious, pious ruler who managed to put Iconoclast bishops on every See considered a holy site by Eastern Christians (except for Jerusalem, which is away from the usual Byzantine sphere of influence). You can't be in a regency, and must enforce a high crown authority. 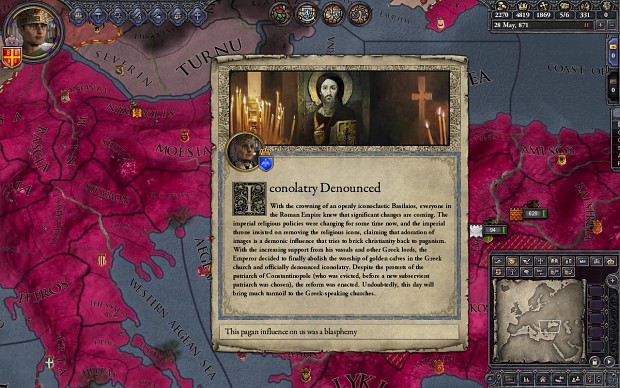 When you press the button, you put into motion the wheels of change. Now, an Iconoclast patriarch of Constantinople is selected and proclaimed the new Ecumenical Patriarch. Don't make a mistake - the previous Patriarch will remain in existence, albeit somewhere else, probably finding asylum among some of the remaining Iconodules. Soon afterwards, the remaining Orthodox rulers will get another event, prompting them to follow the changes in Constantinople, or suffering the wrath of a powerful Byzantine Empire.

This is only an example of how various heretics will enact their reformations. Each particular religion's decisions will be unique, with different pre-requisites and flavor text. For example, Lollards will appoint a formal Speaker for the Church, Cathars will call a conclave to appoint their own anti-pope and powerful Røkkatrú kings will appoint themselves as Loki's own Fylkirs.

The bad news pertain one of the features of the mod. Unfortunately, when you use an event or decision command to make a former heresy a parent religion of its former parent, the game quickly crashes. While this means that you can't make Cathars formally the parent religion (so they will remain a red cross, with a decision to "revert to parent religion"), the creators of this mod will make sure that it will remain merely an intrusive interface option, but otherwise the religion will behave as if it was the dominant version of its religion.

In a minor bad news, there are still minor bugs clinging to the Iconoclast reformation. One of the commands refuses to work (despite being coded the exact same way it is in Paradox-made decisions), so the old Ecumenical Patriarch will remain Byzantium's vassal, while the new one will start out independent. We will attempt to iron out this minor nuisance before mod's official release.

We have already begun working on the next version of the mod. We will tweak any bugs that might surface in 0.3, and start working on Lollards and Cathars. See you soon!