Hail, Barbarian Horde! I've got a handful of things to show you and discuss, including an upcoming playable developer build (more on that below!) for the backers to try out. Continuing to Solve the Platformer Problem I've talked before about making the traversal within the game more "platformer friendly", in that I have a bunch of bad guys that aren't necessarily learn-able in the sense that they are much more reactive; the environment and player position largely dictates their behavior. I've-

I've got a handful of things to show you and discuss, including an upcoming playable developer build (more on that below!) for the backers to try out.

Continuing to Solve the Platformer Problem

I've talked before about making the traversal within the game more "platformer friendly", in that I have a bunch of bad guys that aren't necessarily learn-able in the sense that they are much more reactive; the environment and player position largely dictates their behavior. I've been trying to solve this by adding enemies that have a more dependable, hazard-like set of rules.

I've added a couple more baddies to my arsenal of insidious creatures that fill that hole:

First, we've got a new enemy that I've affectionately dubbed "clingjaw". It's mostly a static monster; it's claw clinging to the ground and walls, with segments and a head that move about in relation to its claw position. It's great for "blocking" the player's progress, forcing the player to figure out a way around the thing (hacking it to pieces is always a good option).

Another beastie I've been messing around with is the slime (finally - yay, slimes!). The basic variety just sort of wobbles around and will occasionally launch itself at the player. Since it's design is so basic, I've kinda gone hog-wild with it, producing a bunch of different varieties and appropriate palette swaps:

The Blue Slime is the derpiest of the bunch, as pictured above. The Red Slime is a bit more aggressive, and has an attack animation. The Green Slime behaves like the Blue Slime, but upon death, pops apart and produces a series of hazardous acidic droplets. The Purple Slimeis the real jerk and can cling to ceilings, drop onto the player, and attack him like the Red Slime.

Also, for anyone interested, I've been using a free piece of software that's saved me a ton of time to map out enemy behaviors: 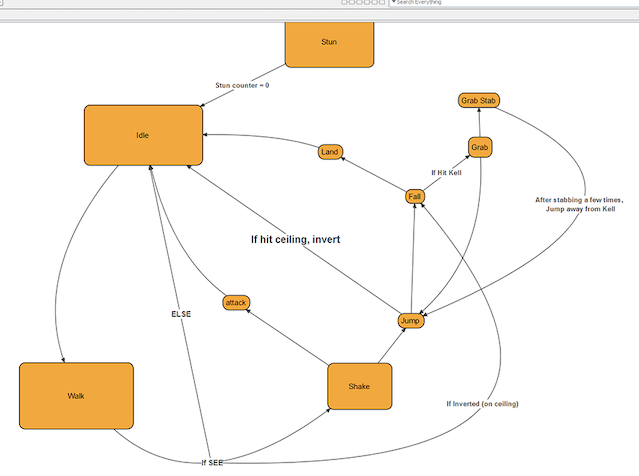 Beats the heck out of scratch paper!

Also, I've finally dropped in a working collision-based spike trap -- simple, and a no-brainer for games like this, but it's great to have it in, now.

In addition to the newer Devil's Shade forested area, there is a new underground forest zone,Helsgarten, that connects to it along the path to the Highlands area on the overworld map.

For this, I've been able to reuse a ton of assets to create a new area. For example, tree tilesets have been reused to create sort of organic pillars, inverted roots allow me to create trees that "grow" upside-down, along with inverted grass tiles.

I have been working from a very convoluted and clunky system that draws the appropriate seasonal tiles, based on the season and biome you're currently in. I've scrapped a LOT of that particular way of doing things, and simplified stuff like crazy. For example, I used to have a layer dedicated to "green grass", and another layer dedicated to "summer weather". Likewise, I had a "winter snow" layer, and a seperate "snow" layer for the Northern regions of the game where snow falls year round. Apply that logic all across the other areas of the game and you can probably start to see how unmanageable it eventually becomes.

I've cut all that out and now just have a global "summer weather" layer, "fall weather" layer, etc., regardless of the zone type you're in. Having redone that, I've also gotten rid of the old random encounter system -- or at least shaken it up a bit. In conjunction with the old seasonal rendering system, I had a set of rooms that would ALWAYS be randomly picked from when you triggered a random encounter on the world map. The array of rooms picked from would always be the same, regardless of your current biome, and then "skinned" appropriately based on biome and the current season/weather situation.

Nope. No more. I now have biome-designated rooms that will be appropriately picked from. This also lets me create signature geometry styles based on your current region, adding some much needed character to each zone. 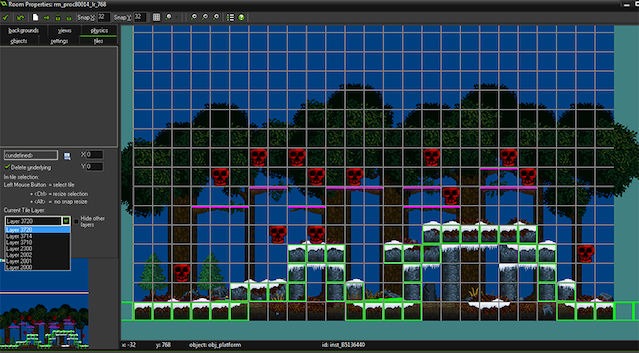 See?! SO MANY less tile layers! And less headaches, as another positive result!

The old way of rendering the day/night cycle got the boot, too. I used to clumsily "draw" a semi-transparent rectangle over the front of the screen with a color appropriate to the current time of day -- I hated it and always wanted to change it. So, I rolled up my sleeves and did. The rectangle made it hard to see the screen in a lot of cases, especially at sunrise, dusk and full night.

Now, instead, I blend a color into the application surface (the end result of all the game's drawing events -- or, the screen and what you're seeing every frame). This gives me a lot more control over adjusting the color values of what the player is seeing, while still maintaining readability over your character and environment. Blues are now bluer at midnight, oranges and reds are more apparent at sunrise and sunset, etc.

This also allows me to do fun stuff with my light sources during the evening and night times, "cutting out" a circle around, say, a torch, where I don't want any color blending:

On top of that, the transitions between day and night on the world map have gotten a lot smoother and more varied (albeit a little buggy at the moment), also thanks to now applying color transitions to the 3D fog:

With the content that's in the game and already finished, I'm going back and tightening up existing story sequences and cinematics:

From here on out, starting this weekend, I’ll be posting weekly updates on the project’s progress — I’ve gotten into a bad habit of releasing this updates every 4-8 weeks — no good and I’m sorry about that! … Which brings me back around to the subject of getting a playable build to Kickstarter backers, Groupees Greenlight Bundle backers, and eventual demo!

Within the next couple of weeks, I’m aiming to release a playable build to the Kickstarter backers and those who obtained the game via the Groupees Greenlight Bundle (and eventual demo), containing the first few areas and such brought up to a polished and near release-worthy state. Polishing up and finishing the content that comprises the first chunk of the game will give me a good idea what it will take to finish this game, as well as getting feedback from anyone interested in giving it a go!

There are several things that I'd like to get in place before doing so, like getting a working save system in place, now that I know what it looks like to progress through the game (things like tracking opened/unlocked doors, solved puzzles, defeated bosses, completed cinematics and quests, etc.). I'll keep you all posted as I get closer!

'Til the next update, have a great one!

Everything really looks great! Love the retro feel of the art!

Awesome! I am so glad, I thought this project died for a mo! Looking forward to the next update. It's clearly gonna be ALOT bigger.