We're currently spending the last couple of days on Touch of Death. We're getting ready to submit it, adding the last features and preparing screenshots and texts.

Closing in on the release of Touch of Death, we're busy with lots of small things. For example I've spent a solid chunk of today just writing the app store texts, making and uploading screenshots etc. Not the most thrilling parts of game development, but the upside is that we finally have some interesting material to show to you guys. 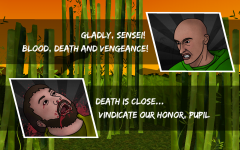 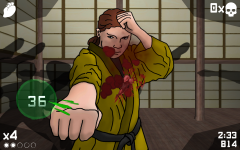 On the left screenshot you can see a preview of the intro. It's a little story snippet you get at the start of the game, that explains what's happening. Granted, it's a pretty minimalistic story (you go on a quest for vengeance), but it is very important to us.

As a little sidenote: These two guys are actually us two developers. You can se Jo in the lower left as the dying mentor. I'm up top as the angry pupil, though in real-life I have a lot more hair on my head.

The screenshot on the right side is from the game. The enemy you see has just been defeated and her heart is bursting in a shower of blood. Also you get points, which is always nice.

So that's it for today. Now I'll have to hurry back to my duties!