Hey! We are proud to tell you more about Tahviins today! They are the first civilization we are working on: Brokku's civilization.

More intelligent than all the other civilizations, Tahviins are from the planet Brokku. They have a real sens of collectivity and are not solitaire. Strong and smart they can adapt to every environment, able to endure extreme temperatures. 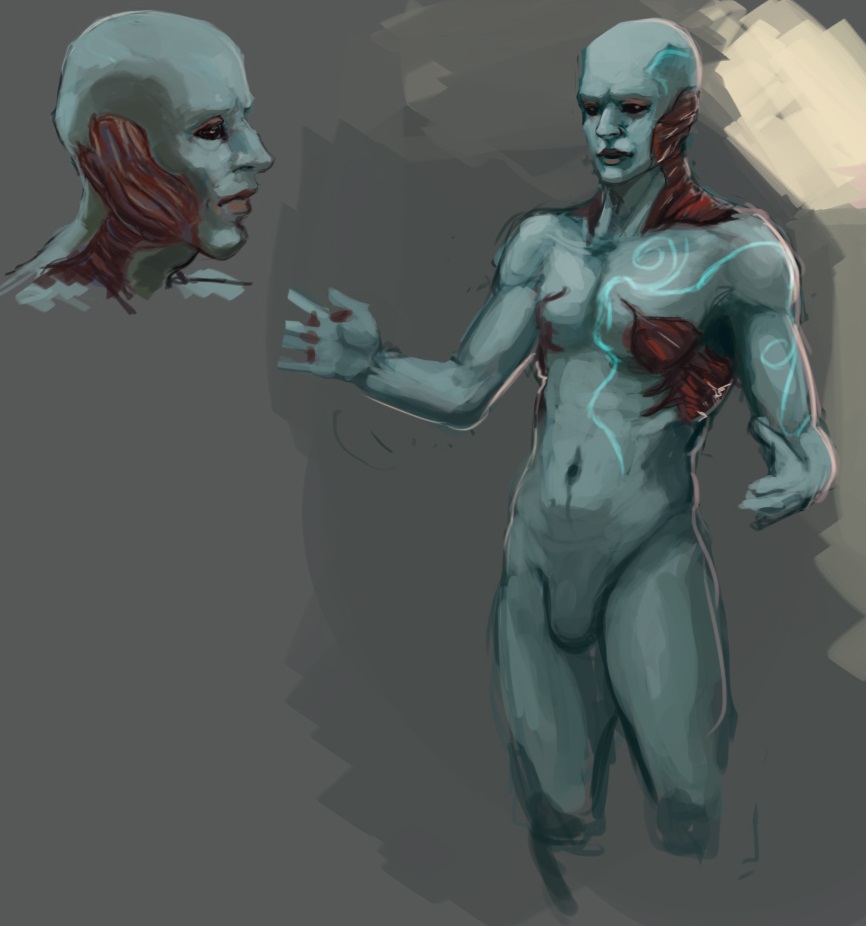 By human standards, Tahviins are tall, by about 40 centimeters taller. They look like humans with pale white and hairless skin. Their face, severe with large clear eyes,gives them a very neutral appearance and without apparent emotion. Their physical formation allows them a great adaptation to all environments, especially in aquatic environments. Indeed, they are amphibian type, and their skin is made of tiny white scales giving a natural reptilian look. Their body has the ability to find oxygen in every environment, they can automatically sort particles and molecules to take what they need. Thus, they are able to breathe underwater and adapt in every atmosphere. When it is dark, it is impossible to see clearly in the water, that's why motifs of blue lights are drawn on their skin just like light "tattoos" during the night and their eyes also shine, allowing them to illuminate their way. These motives are slightly visible during day time. Tahviins have a lifespan of approximately 350 years.

Tahviins are peaceful and believe that everything can be solved by their intelligence and god. Indeed, all their mentality is based on a very strong belief in god's power.Not really talkative and mystical, they are described as "cold" by other civilizations.However, they are very curious about learning new things and feeding their intelligence. They hate problems, they have trouble facing them, but their ability of reading emotion on faces (1) allow them to prevent any conflicts, and their emotional stability helps them not losing their temper. Their evolution ability is, by far, the best among all the civilizations, they are surprisingly creative and handful. Tahviins are respectful of the laws and rules in general and cannot lie, that's why they are often considered as the most honest civilization of the galaxy.
1) Tahviins have the possibility the see players' mood gauge on the character's information when targeting. 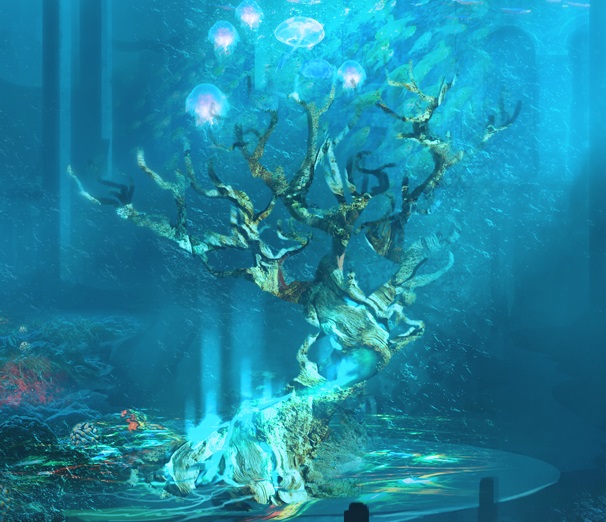 One of the most important thing for a Tahviin is religion, they adore Vaa Nunn(God). They truly believe god's power, and know how helpful he is for them. They also believe in a life after death in another kingdom and reincarnation. Thus, the life of Tahviins is a wait before joining god, that's why death is an important moment and sometime on purpose. They have the ability of hearing god's wordswhen they are in churches (1). They also truly believe that Vaa Nunn will return 780 years after his first visit. When the first Tahvinn arrived he found the "Vaa Nunn saturmaa" (2) explaining what god did, teaching life to his creation. This first Tahvinn didn't know how to speak the Brohvenn but understood every single word, and that he was his creation and that he will return one day.

1) Brokku's god as the three others, can interact with churches to give benedictions, but, in addition he can send words and advises to a church that can be read by players entering that church.
2) Tahviins' Bible.

Tahvinns are the most organized civilization of the galaxy, they are not subject to dictatorship and have their own kind of government style: Organized anarchy. The length of a leaders' reign is six weeks because of their dating system organized differently, also because of their lifespan. They have their own social classes, almost all different from human's system, but still organized in four main categories (popular, middle, comfort, elite).

Tahviins speak the Brohvenn, a really serious sounding language that was invented as early as Brokku was created by god. This language is different from the Galactic language in many ways: His pronunciation and difficulty, even though it is far from being the most difficult language in the galaxy. All books you will find in libraries are written in Brohvenn (1)

1) A lot of language manuals will be at the disposition of players to learn if they want to. And the knowledge of this language will help the player during epic quests, where everything is indicated in the official language of the planet they are.