Friday summary of work done on Simulacra for the week of the 18th.

This week I attempted to focus on gameplay which was a lot of fun and made some good improvements, albeit somewhat stymied by a persistent bug.

The gameplay was mainly focused on providing good user feedback and making the combat a bit more "snappy". I was looking quite a bit at the isometric Tomb Raiders as reference for this, even implementing a version of the trigger-able mine seen in those games. Also touched up the effects and feel of the primary weapon which I'm pretty happy with for now.

Unfortunately I have been stuck with a bug where the player mesh is lost every time I leave the editor so until I sort that out I can't really make a build. Frustrating but I will keep on it, I'll even rebuild the main character from scratch if I need to.

Due to the bug and migrating the project to the newest version of Unreal, I also spent a little time adding some more foliage. I'm excited about the new broad leafed plant as it was my first test in migrating the foliage over to gradient map texturing. The plant uses a height map to define the shader driven gradient mapping so I can easily swap out colors or stack them using indexes. My hope is that this will make them easier to use over a variety of environments and easy to balance the color in the scene. I will migrate the grass and other plants over soon as I start tightening up the environment more.

Hope everyone has a good weekend, and this is the last post prior to the holidays so there won't be any post next week. 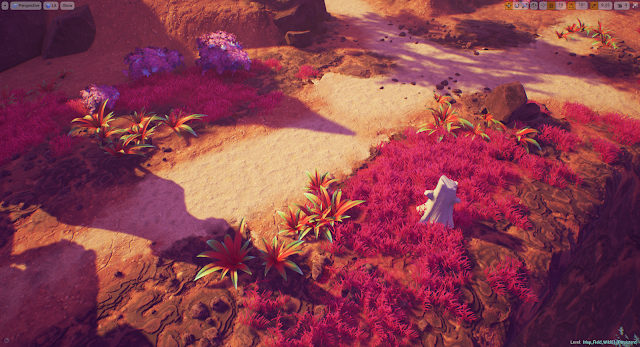