Game is about 80% complete with 2-3 week release, random news, blah

At this point, I can say First Pixel Shooter Episode 2 will be releasing within 2-3 weeks at the earliest. The game has come a long way, with the predecessor's development start 10 months ago! Almost a year ago ALREADY I began working on First Pixel Shooter. It was meant to be a spin on wisemeat56's Blobland Wars, but turned out to be too CoD-like. Either way, it was my first real FPS attempt, and I came a long way. I remember looking at old code and not knowing how to use basic functions in GML.

I started working on Episode 2 literally 3 days after I released the original. However, I scrapped it and started again 5 total times. I'm sure you will agree that this was for the best, the previous attempts were not approved by my seal of quality, and I disliked the direction they were going - I wanted to make the game how I wanted it, something I believe I failed with First Pixel Shooter. In between those attempts, I lost the motivation to work on it numerous times, and worked on other projects. However, in September and October, I came back strong and really got a lot of work done on the game, albeit very slowly. In the past 3 days I've done what would take 2 weeks. What this means is that I am in the proper mindset and motivated to finish the game quickly but with gentle care. I meant to release a demo, but it would be time that would not be worth investing, so its onto the main event.

I know a few people are looking forward to this game, and I hope to please you all. Episode 2 offers a far different approach than the original, and I hope you all welcome the changes. On the subject of change, I am sad to announce that at release, there will be no online components, and they may not be planned at all. There is just not enough people - what are the chances that you went on and there were 1 or 2 other players on, ready to play? Not likely. It is not worth the hours of investing and potentially messing up what I have. Perhaps (but don't bet on it. At all.) at a later time. In my opinion, the Arena mode is interesting enough, and should keep players occupied for a little bit. The main focus is the story mode, however.

If you did not know, Episode 2 is progressive rather than mission based. That means that you traverse the levels and world of the Pixel people, rather than jumping in and out like the original. In my opinion, it allows for a more immersive and enjoyable experience.

So in any case, I hope you'll continue to follow this game's progress up until release, and well, enjoy!

Edit: Online fixed and working, but will be the lowest priority. 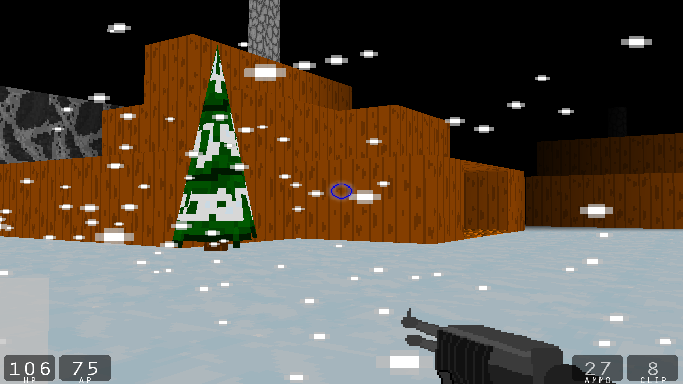