The news article discusses future work for the game such as new game modes.

First off, thank you to every one for the support. It means a lot to me!

In this update, I will be discussing the future work that I have in mind for the game, especially the game modes that I plan on implementing.

There's a whole list of ideas for game modes that I have with me but I won't be sharing all of them here; just the ones I think should be implemented first. Their names as well as the rules for them are mentioned below:

> Feud:
I've had this mode in my head since I started working on this game. It's similar to Team Death Match, but instead of fragging any enemy in sight, it'll work based on revenge. Being fragged by an enemy will start your "Feud" with him and place a hit on his head. Fragging your hit will earn the whole team a point but non-hit frags only earn individual points. However, a non-hit frag will start a new "Feud" between two players. A player can have a "Feud" with only one player at any given time. Being fragged by someone else will end the old one and start a "Feud" with the last fragger. However, a player can have more than a single hit placed on him. Like TDM, this mode has continuous respawn.

> Kabaddi:
Kabaddi is a South Asian wrestling sport played by two teams occupying opposite halves of a field. Each team takes turns sending a raider into the other half, who has to tag an enemy and then return successfully. Returning successfully rewards the raider's team a point. If not, the opposite team gets a point.
In this mode, each round, a raider is chosen from alternating teams to raid the enemy's "half". All players except the raider will have their weapons disabled. The raider will try to frag as many enemies as possible, but has to frag at least one to be able to return without losing the round. As soon as First Blood occurs, it's weapons free for all players. That raider has to fall back to his "half" and his team has to help him do that. The opposing team has to frag the raider before that happpens. Returning successfully awards the raider's team all the frags as points. Otherwise, the opposing team receives a point.

> Ghost Hunt:
A team consists of only one player (the ghost). All the ghost has is a sword and complete invisibility, only disengaged by taking damage, but cannot use jet boots. The opposing team can neither use jet boots nor invisibility with their inventory containing the sword, the link gun and the shock rifle. The mode is going to be round based. Each round, a player will be picked at random to be the ghost. The ghost then has to try and take out all the players on the opposing team, and vice versa. For this mode, I was planning on having a chilly/creepy atmosphere on the related maps, kind of like a quick mock up I made below: 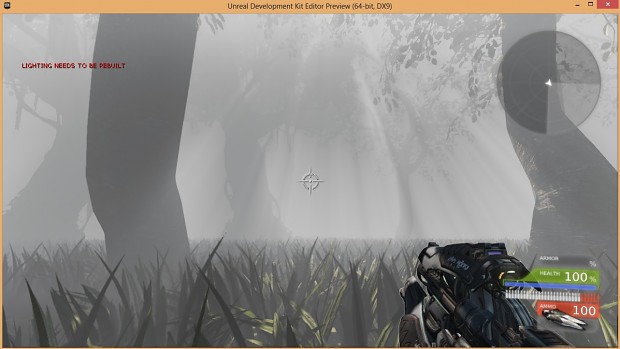 The forest and the heavy fog limits visibility and breaks up the line of sight to allow the ghost to sneak up and attack. Indoor areas on the maps, however, will have negligible fog.

> Hide and Seek:
This mode is exactly what the name states. Players on one team have the ability to become invisible, which is only disengaged by shooting or taking damage. Using that, they'll have to hide. The opposing team has to seek them out and frag them before round time runs out.

The rules for these modes are not final. They'll most probably change and evolve as implementation proceeds.

Apart from the modes, future plans also include implementing an options menu that'll allow the player to change settings right from within the game, as opposed to having to mess around with INI files.
I'll upload images of it as soon as I make some progress on that front.

Thanks for reading! Looking forward to your feedback.