URR now features multiple lighting sources and the ability to throw objects (especially torches, which light the path ahead).

Posted by UltimaRatioRegum on Sep 28th, 2013

Just a short update today as it has been a busy fortnight. Firstly, you can now throw items. Doing so brings up a crosshair, this time yellow (the ‘l’ook function is white, whilst the ‘g’rab function is orange), which also produces a “tail” behind your cross hair which shows you whether or not your throw will reach its target, sections of which will light up red if you’re trying to throw it through something you can’t. You then press enter, and the item soars across the map (some items spin whilst flying, so a torch will display as ― / | \ whilst flying) and hits whatever. I’ve also enabled a system for a message to display both when the item hits something, and when it lands, along with any other effects. For instance, you might get “The torch hits the wall”, or “The torch lands on a fire trap”, or “The torch hits the wall and lands on a fire trap” if you aimed the throw at or beyond a wall, it hit the wall, and then comes to land on whatever is below it.

Additionally, some objects now set off some traps. Anything passing through a tripwire (not over a tripwire – it must land on the tripwire) will set it off, and heavier objects landed on pressure pads will set them off. You will also soon be able to ‘u’se branches to, rather than just throw them at traps, prod a trap in any square adjacent to you. Bear traps cannot be set off by something as light as a branch landing on them, but they will be triggered if you push down on the trap with one manually. Naturally all of this need will need balancing in the future once I know how much the player can carry, the scarcity of items, etc, but I’m just focusing on the mechanics for now. Below are two pictures of valid and invalid throws: 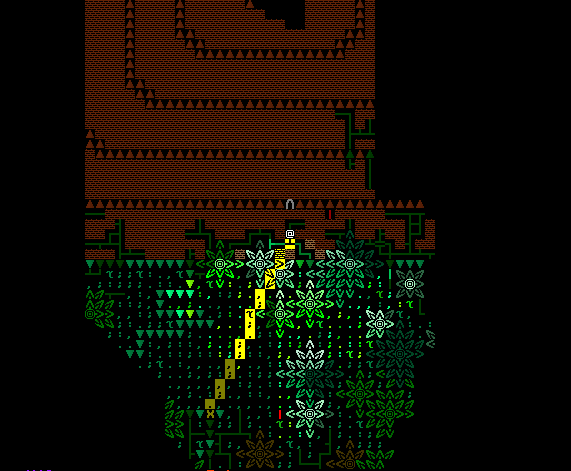 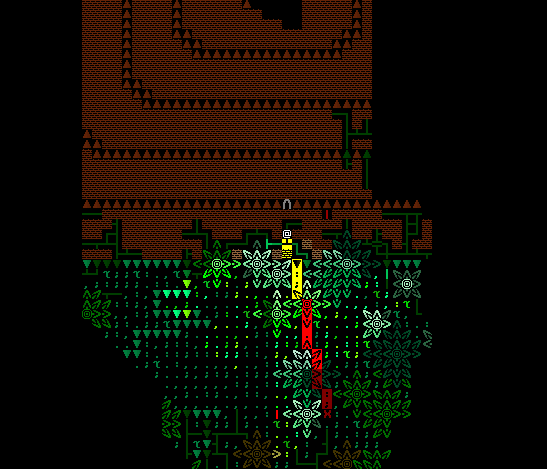 Secondly, torches now produce lighting whilst they fly! It is a very, very cool effect, and means you can now throw torches into the darkness to see what’s ahead, if so inclined. There will be very little in the current release that you might need to do that for, but in later versions it will be of much more use in certain situations (though you’d always run the risk of alerting people up ahead). The image below should give a vague idea of what it looks like, but I’ll try and produce a gif of it at some point. 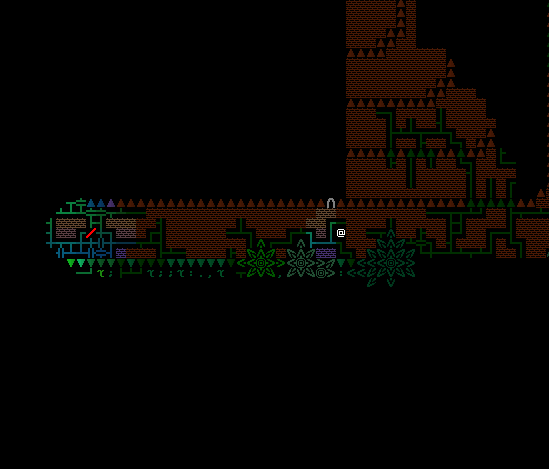 My next objectives are making sure all the interactions between objects and items on the map a) are correct and b) give correct messages whether in or out of sight, working a little more on tripwires so they spawn correctly in some unusual map situations, and finishing off the trap graphics, around 70% of which have thus far been done. After that I’ll be working on the ‘m’ake menu for combining items (for example, constructing torches), and then I’ll be moving onto the second big part of this release, which is health, damage and healing items. Well on track for releasing 0.4 before the end of this year! I’m also going to start producing much more detailed changelogs from here on since there’s always a lot of tweaks and minor new features I end up fitting in. Until next week you can keep up to date on my devblog, Facebook page, or Twitter feed. The devblog is updated weekly (though the day varies), Facebook a few times a week, and the Twitter roughly daily. Any thoughts, please leave them in the comments! Stay tuned...

Those are some of the nicest looking trees in an ASCII game I have ever seen! Also love the colors, Blah, 16 colors is for people who can only afford EGA. Bring on SVGA with 256 colors! woohoo!

Well, thank you very much :). I did debate using a tileset, but I think using an extended character set, but still limiting myself to foreground/background colours, give an interesting (and aesthetically pleasing) effect.

Yea I usually don't like text games as I can't understand for the life of me whats going on. But that is just really nice. And I can understand it. The colors and patterns give it very nice contrast.