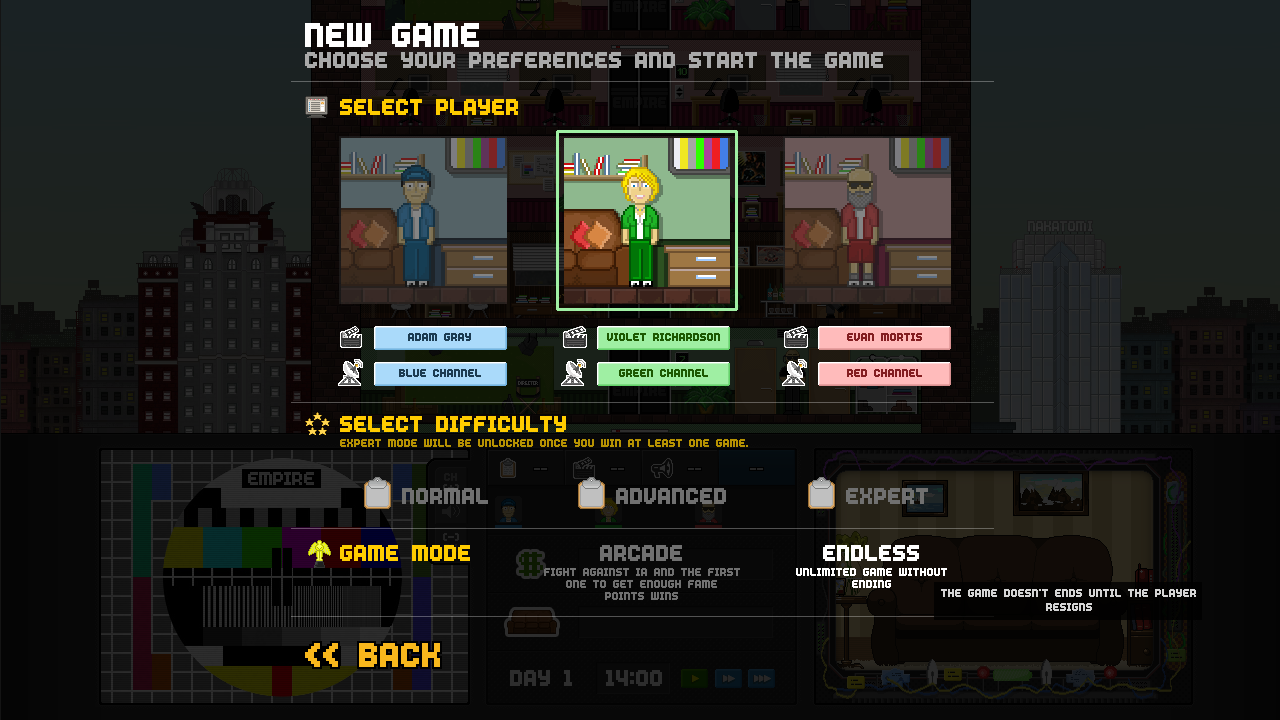 This is the first iteration of the endless game mode. Now, when you start a game, you can choose to play in arcade or endless mode. Endless mode will let you play without the pressure of the competition, you can develop your tv channel at your own pace. You will never lose the game going bankrupt (money can still be a problem) and getting behind in fame will only hurt your ego, the audience will love you anyway!

Arcade mode is the same mode we had before, a race vs the others channels to see who is the first to reach 300 fame in normal difficulty or 600 fame in advanced/expert difficulties. When one channel reach the fame cap, wins, and the game ends. At this point, thanks to the addition of endless mode, whether you win or lose the game you can keep playing that same game in endless mode seamlessly. 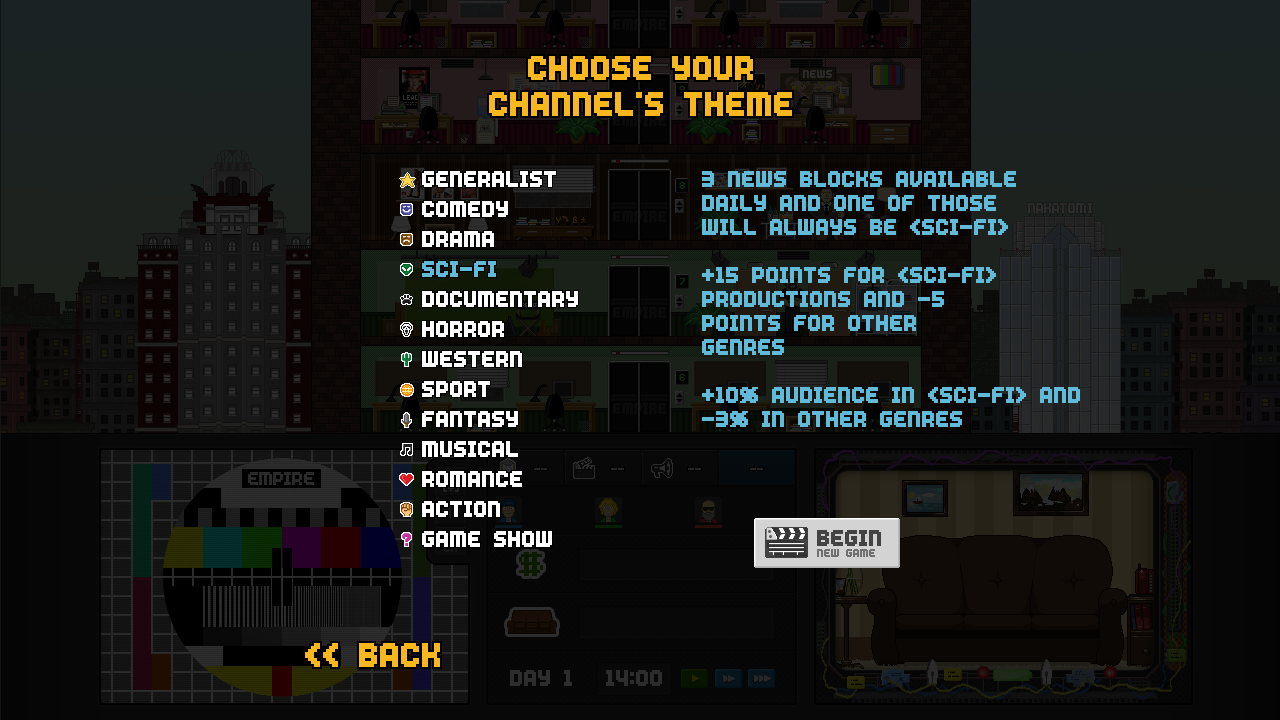 We have reworked the way in which the AIs buy upgrades, so first we had to normalize the fame score system for Advanced and Expert modes, now the fame you get in those modes is the same that in normal mode, +3 for winning the audience in on block, +2 for second place and +1 for third place.

We want to give players a little bit more control over what their channel is about and what content to schedule. For this reason we implemented some new features for the game.

When you start a new game you can specialize your channel in a genre, doing so you will get certain advantages in that genre. 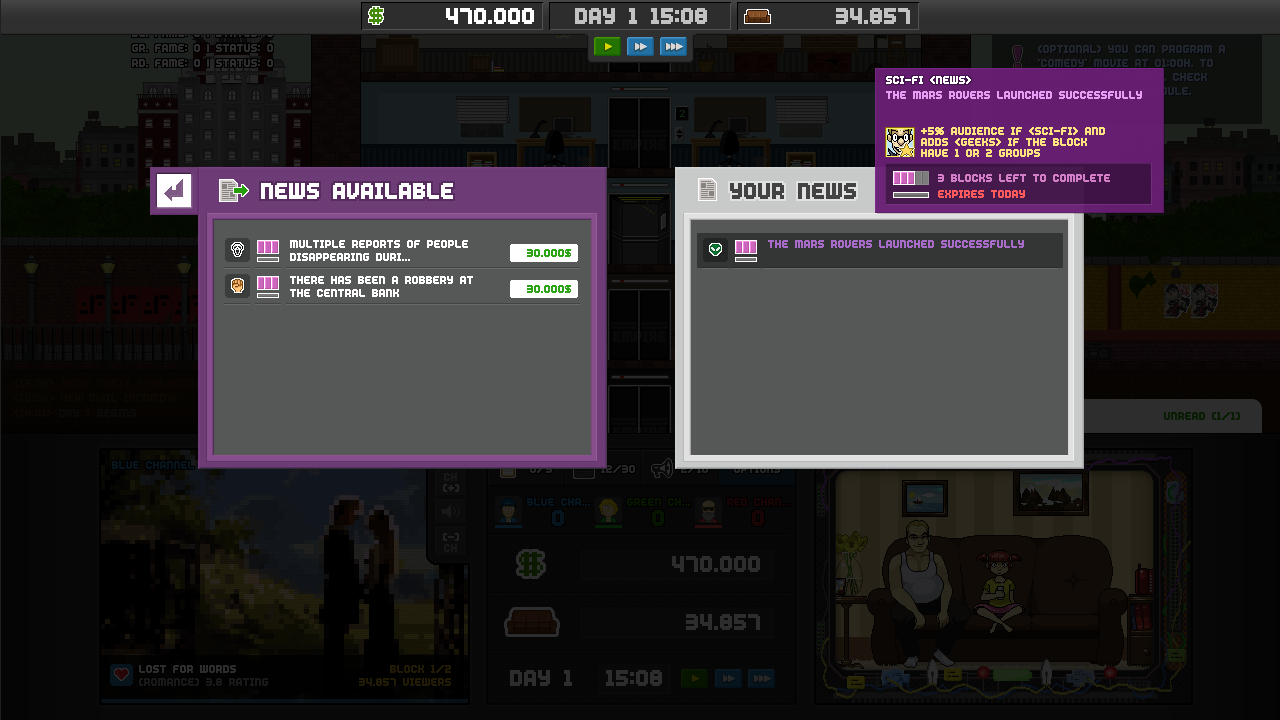 Audience bans are free and you will get a fixed amount of bans each day (number changes with difficulty). It will give you the option to remove audience groups from the sofa at a given time. Let's say we have women and geeks in one hour and we want to schedule a sci-fi movie there, we can use one audience ban and remove the woman, leaving just the geek group at the sofa ready to watch our sci-fi movie.

Channel news are a new kind of block usable on the marketing column. News are genre specific, have a cost and a variable number of blocks (the news reset every day).

Each news block have two purposes. First, it adds a flat percent audience increase in its own genre. Second, and most important, it will add one audience group based on its genre to the sofa, if there is enough room. 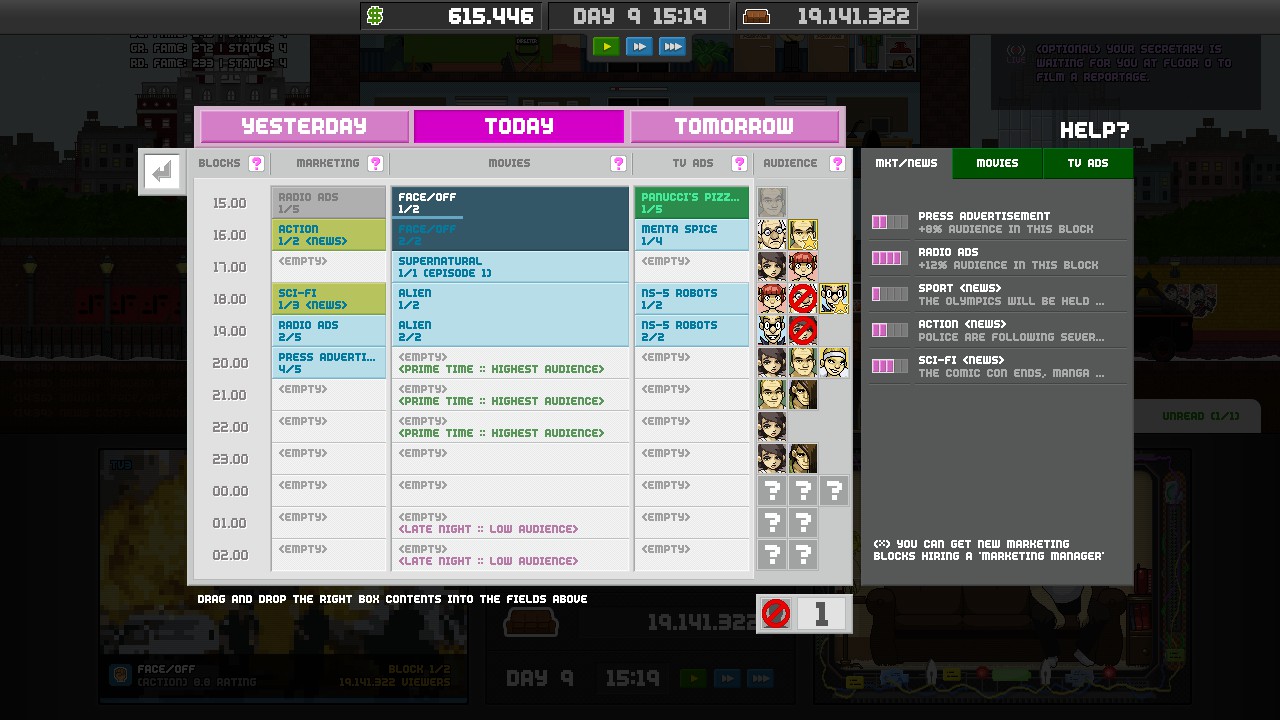 We wanted to give more importance to the movies that win the best movie award (besides the fame and gold prize). If you are lucky enough to win the award with one of your productions or buy a winner movie produced by the AI, you will be able to broadcast it on your channel with a flat viewer audience bonus based on the production and state of the game.

After some changes we have reenabled the linux version but it will only work for Ubuntu 12.04+ and SteamOS+.

- Added two new types of production: mini series (5 ep. tv shows) and long duration tv shows (15 ep.)
- New tooltip at the audience numbers that tells you all the audience bonus of the movie being broadcasted on your channel
- New tooltips for difficulties and game modes in the new game menu
- Now movies carry a lot more audience over the next movie block.
- The -by player- tag is now highlighted to help differentiate content
- Added a few more daily quest to complement the endless mode
- Changed the fame bar to show the three channel's fame
- Work finished and daily quest mails are deleted automatically after a day
- After a short identity crisis, the musicians are back to being rockers
- Children no longer watch the tv after 10 pm, but they appear more often in the afternoon
- Some audience groups had minor changes in their likes
- Rebalanced the money cost of actors
- Rebalanced the salary of the workers
- You can now resign your game at anytime
- Graphical and color improvements in some screens of the game
- The pink screen and the production bugs are finally fixed
- Fixed some minor bugs 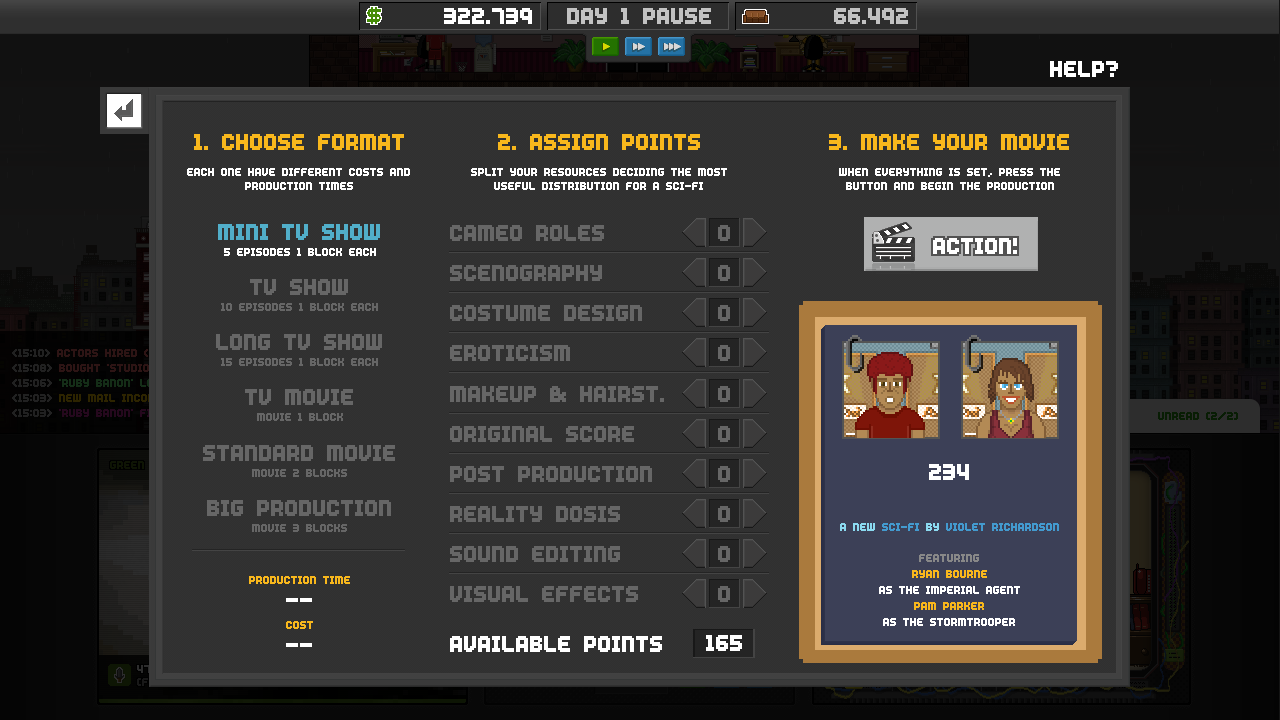 This patch includes features and adjustments to core functionalities, because of it this version is incompatible with any savegame prior to 1.1.0.

We are sorry that we don't have the game in german yet, we hope to have it fully translated before christmas (big thanks to the community members who are contributing to it!).

We are really happy with this patch, those new features will get even better and more content will be added over time. We are a small team of two people and we want to keep improving the game more and more, in fact we already working in a way to make custom games where you will be able to select the parameters of every game. As always, be free to post your suggestions on the discussion boards!

Thank you all for your support.