After an overwhelming (and positive, thankgod!) reception to 0.1.0 of the Elder Kings, and a week of waiting, we are happy to announce the release of 0.1.1 of the mod. This version includes literally hundreds of localisation fixes, hundreds of bug fixes and many tweaks and changes to some of the mods mechanics. 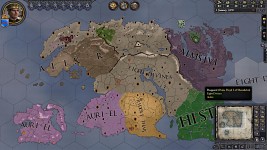 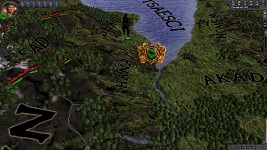 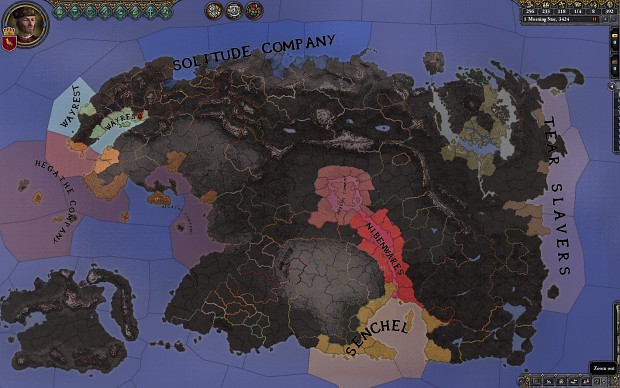 We're currently awaiting authorisation of the installer here on MODDB, in the mean time however you can download the mod at the following locations;

Changelog
[Added] Russian portraits for Reachmen (if you have Russian portraits DLC).
[Added] More religion decisions for other religions (courtesy of DarkReborn).
[Added] New traits (Virile, Rebellious, Disloyal, Lead from the Fore, Lead from the Rear)
[Added] Female Mer portraits.
[Added] 2 New events to Rally Rebels Marshal job action (the modifier currently has no effect, so there are now random events to give revolt risk).
[Added] 2 New events to Survey Steward job action; Bandit Camp Discovered and Buried Treasure Discovered, both have a chance of giving money, while the Buried Treasure one also has a chance of giving a random artefact.
[Added] New Retinue for the Khajiit (Anequinan and Pellitinian Cultures now get their own seperate Retinue).
[Added] New CBs (Liberate Countrymen, "Honour War" for lack of a better name)
[Added] New spells to the Spellbook (Heal, Grand Healing, Beautify, Harmony).
[Added] Basic Dunmer House traits system (very quick sketchy work to ensure most Dunmer get their House Trait, let me know if it's causing issues).
[Added] Arumba's GUI Tweak and Shortcuts mod.
[Added] Several lore names to the lists.
[Added] Reachman trait.
[Added] Minor title Auto Assignment Decision.
[Added] A "System" to try and make Mer realms a little less stable. Their long lifespans (and thus long reign durations) caused them to stack up +100 opinion, leading to far too much stability and steamrolling of other non-mer realms by the AI. AI Vassals of long reigning Mer will now get events reducing their opinion a little the longer the Mer reigns, hopefully reducing the long reign, but not eliminating it outright.
[Tweak] Raht trait brought in line with Strong trait, and added to event weights.
[Tweak] Decreased requirement for Marshal Councillor job from 15 Martial to 12 Martial (for non-Martial Educations; Martial educations can still always be Marshal).
[Tweak] Changed Lead Troops into Battle Ambition to only be selectable by those able to lead an Army.
[Tweak] Slightly reduced child mortality
[Tweak] Independent Rulers can be appointed as Army Leaders even if they don't meet the "Marshal" conditions (you can therefore always appoint your own ruler as the leader of an army).
[Tweak] Removed some of the Dunmer House artefacts held at game start, no single Dunmer now holds more than one artefact.
[Tweak] A character can only create 1 Knightly Order in their life time.
[Tweak] Merged Martial triggered mods into Martial stat.
[Tweak] Merged AI and player minor title triggered mods.
[Tweak]Cultural combat tactics so that at least all the Tamriel races have one unique combat tactic
[Tweak]Agile now affects chance of death, chance of wounding, and chance of serious head injury
[Tweak]If you have too many lifestyles (only doable with ruler designer) than you will lose all your lifestyles
[Tweak] Reduced Swordmaster martial buff to +1 martial.
[Tweak] Fertility in some races (primarily Mer)
[Tweak] Becoming Craven battle event has been reduced in frequency, now your Martial and education directly affect it (higher martial and higher education are more unlikely to get it, but only the Martial orientated educations).
[Tweak] Maimed/Wounded/Death battle event weights have been tweaked to reduce frequency based on martial skill and various traits.
[Tweak] Altered Interracial marriage maintenance event to be low MTTH rather than an on_action yearly event.
[Tweak] Hid some traits from ruler designer.
[Tweak] Added checks to minor titles candidate decision so children will no longer appear in the list.
[Tweak] Buffed Tend Wounded job action.
[Tweak] Reduced Argonian fertility buff (due to decreased child mortality with the removal of VIET childbirth death events).
[Tweak] Restored vanilla movement speed (it was 1/3 slower than vanilla, now it's the same).
[Tweak] Readded the "attribute = learning" line to the Court Wizard. For some reason defying logic, this actually causes the Cout Wizard to rename itself to High Priest, it's an issue in base CK2, not something I can fix (so let me know if you'd rather have the number displayed and x2 learning bonus, of if you'd rather have the Court Wizard called Court Wizard).
[Tweak] CBs have been scaled back to vanilla settings and rewritten.
[Tweak] Increased Mercenary unit sizes.
[Tweak] Reduced "Improve X" ambitions back down to 10.
[Tweak] Changed some minor titles so they can be accessed at a lower rank (which was always the intention).
[Tweak] Changed the Imperial Commune's mercenary vassal from Legion Cyrodiil to the Imperial Knights.
[Tweak] "Blind" (congenital blindness trait) now has a small health malus.
[Tweak] Thu'um decision temporarily disabled until the event chain is completed.
[Fix] Prevented being able to select a start date earlier than 3370 (this was never intended).
[Fix] Restored Magicka Potions to their original position in the Spellbook (they're no longer nested under Fortify Spells).
[Fix] Immortals and Briarhearts getting Incapable and Infirm traits from normal health events based on age. They can still gain Incapable or Infirm via assassination attempts, battles and other "unnatural" events.
[Fix] Immortals and related trait-Characters should no longer recieve the Old Age and similar modifiers.
[Fix] Hundreds of localisation fixes.
[Fix] Become Great General Ambition.
[Fix] Broken Necromancer events.
[Fix] Several duplicate ID errors.
[Fix] Error in Portraits.gfx causing CTD.
[Fix] Readded a missing event from the Spymaster's Build Spy Network.
[Fix] Religious heads giving you jip for heretics when you're not even part of their faith.
[Fix] Dead children getting pet cats (although, cats *were* the guardians of the souls of the dead

)
[Fix] Several duplicate Baronies removed.
[Fix] When a character is able to choose another child's education path other than their own, the decision wasn't flagged as "important", and thus no one knew it was there.
[Fix] Numerous education system bugs.
[Fix] Duplicate trait (Pilgrim) removed.
[Fix] Pregnancy events should no longer allow inter-racially incompatibles or infertiles to breed.
[Fix] Some unit positions have been fixed.
[Fix] Battle event for veteran trait not functioning properly.
[Fix] Granting Assassin titles and demoting shouldn't be possible at the same time.
[Fix] Wrong terrain types (if you spot anymore you think are wrong let us know).
[Fix] Dozens of other minor bug fixes.
[Removed] VIET Childbirth death events.
[Removed] Telvanni Relation System due to severe lag issues.
[Removed] (actually disabled) new crown laws, unfortunately their modifiers don't work (support for custom laws and other mechanics is incredibly low in CK2 *rant rant*).

I just have one question : how does it work if two persons from different races get married and have a child ? (Ex : Dunmer with Human)

Human+Dunmer is a "compatible" match. They can reproduce as normally. Due to Ck2's mechanics we can't set a child's race on birth, but in testing they actually seem to default in general to the mother's race, not all the time though.

The ruler designer does nothing, it's automatically makes you a new character, also the countries coats of arms are random except for color

The ruler designer always generates a new character instead of editing an existing one.

Do you mean when you try to use the ruler designer, you design your character but then when it loads up in game it's a different one to the one you designed?
Are you sure you didn't click elsewhere on the map?

The character created in ruler designer when put in the game (after he has been made in the designer) has different traits, education, and a new name/family crest. Even the race and culture is changed.

You need to have Deadric as a religion, and have it spread. Morrowind ideally should have a lot of deadric in it given how many cults and ruins it has.

Not sure if the ashlands should have their own religion, but there needs to be something there to make them angry at the other major houses.

Great mod indead. But I have a pb. I play as a Dunmer, and when I want to grant a landed title to a vassal of mine, he becomes independant and he is no longer my vassal. Do you know why ? Thanks.

Does anyone know how to form skyrim? The only condition it lists for me to fulfill is (X) never. But if i fast forward the game in the main menu skyrim does appear.

somebody met with such a problem?
[gfx_dx9.cpp:2187]: GfxCreateTextureFromFile failed with error: Invalid call

You need the legacy of rome dlc or the non-lor compatibility patch. Register your game at the Paradox forums and you can then access the modding subforum. The non-lor compat patch can then be found here;
Forum.paradoxplaza.com

So i have 3 kingdoms and i fulfill all the requirements but it sill wont let me form skyrim, any ideas?