Post news RSS Echoes from Darkness: A concept, an idea, an introduction to the Game

Hi IndieDB !! In this news, i want to present you the game, the team, our goals and more. Yes it's a big news. A lot of text, a lot of images but your reward will be great ;) Let's start!!

Posted by MysteriousPotion on Oct 30th, 2013

"The following paragraph is the same as the introduction of the game page.
You can skip it if you have already read it." 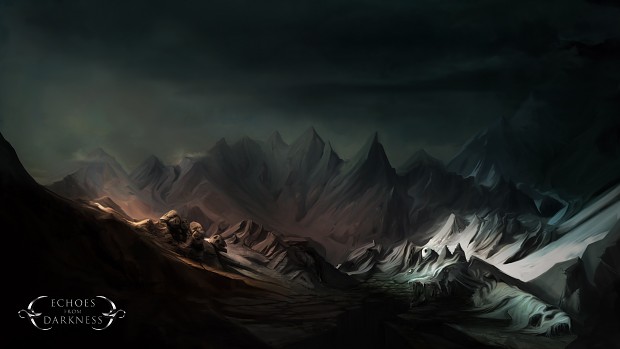 EFD : Echoes from Darkness is an original 3D Tower defense with resources management, magic, and buildings’ capture. All of this is contained in a detailed scenario with random events and a map generator. In English, french, spannish, (and more) on Pc, Mac, Linux.
Why original?
Because it is a tacticle tower defense, with many modifications renewing the type and giving it a new life.

Everything starts with a detailed story, a rich universe with strong foundations. An epic world with heroism and sadness, glory and defeat, but, above all, a world with men. These men create worlds and Gods and unmake them. Neither white nor black. Only trying to find their place in the world.
Here comes a future hero. A becoming man, banished, discovering the world and himself, the weight of responsibilities, and his journey to resurgence.

The discovery of magic, helping but also constraining, a strength in the though apprenticeship. A power leading to doubts and weakness, a two-edged weapon.

In “Echoes from darkness” the player will be a hero facing God of destruction’s awakening, who’s sending his legions to destroy the world. The hero will have to travel through unknown lands, use the resources that he has at his disposal to build his defenses (tower, wall, trap), take over buildings, spell cast to defeat Evil. 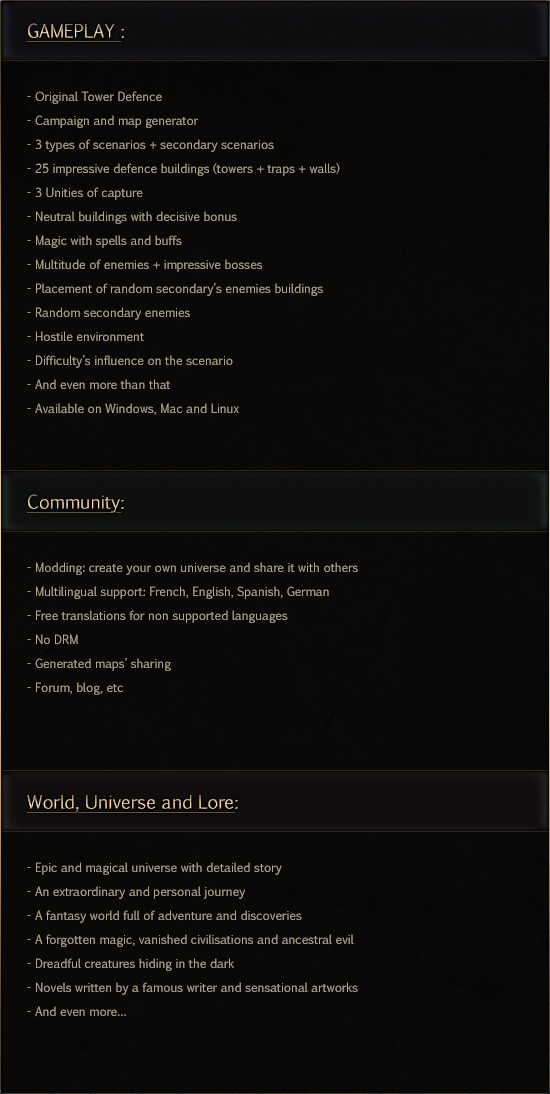 In “Echoes From Darkness” there are 3 types of principal scenarios and multiple secondary goals.

The 3 principal types of scenarios are the following:

“Echoes From Darkness” is structured around three types of principal scenarios with the possibility to achieve some additional missions/ goals.

As a Tower Defence, and like in all the classics, the main scenario is to protect the main building from destructive enemies coming from a limited number of waves.

In this situation, any enemy coming in contact with a main building is inflicting damages to it. If the damages are too serious and life is dropped to zero, the mission fails and the player loses. This scenario is called “fortress”.

There is a second type of scenario close to the first one because of its goal to protect points of life. In this mission, the object to protect is moving from a point A to a point B. This scenario is called “Convoy”.

In the third scenario, you have to protect a certain amount of objects (munitions, food). When an enemy comes in contact, he can steal a unit and go to the exit. This exit can be on the edge of the map, the building or something else. When the enemy steals the unit, and if he is still nearby, the player can still kill him and take back the freed unit. If the enemy is killed outside the nearby zone, the unit falls out and is not taken back. However, if an enemy is coming close enough, he can take the unit and go away with it.

In parallel, you have particular secondary goals like capture certain buildings, not using some defensive ways, destroy buildings and secondary enemies, etc. Those secondary goals will be modified depending on the level of difficulty chosen and some can be random.

Defence buildings (available constructions to the player) are sorted in three categories:

Each building can be improved twice. Like this, it can increase its characteristics (points of life, damages, etc).

To build buildings, the player will have to use specific resources he has at his disposal: creative energy.

Each of these buildings has particular characteristics: physical or magical damages, targeted or zone of attacks, support system. Many articles will come back to complete, in details, this part on defence buildings.

3. Resources of the game

The gameplay is structured around two resources:

- the creative energy which allow any thing to exist in time

- The magic: raw, volatile and dangerous, domain of the ephemeral.

These two resources help the construction and the improvement of the buildings and the use of spells and buffs.

The creative energy helps the construction and the improvement of the buildings. The player starts a party with a certain amount and a basic rate of generation. By killing enemies, the player recovers their energy. Furthermore, by capturing a source, the rates by second of generation increase. The improvement of the buildings has an influence on the rates. There is no maximum limit to the quantity of creative energy a player can possess.

Magic is a resource used to cast a spell and activate buffs. The rate of regeneration is fixed just as the quantity of the gauge. The capture and the improvement of buildings will increase the maximum of magic but not the regeneration rate.

4. Neutral buildings and their capture

One of the strength of “Echoes from Darkness” is in the management and the capture of neutral buildings on the map.

There are different types of buildings:

The sources: sources are sacred buildings extracting and condensing creative energy. Their capture by the player increases the regeneration rate of creative energy by second.

The fractures: they are built buildings on the reality breach. Their capture increases the maximum of magic but not its regeneration rate.

Points of control: some buildings have influence on the map, as long as they are not under the player’s control it is possible to build in their zone of influence. 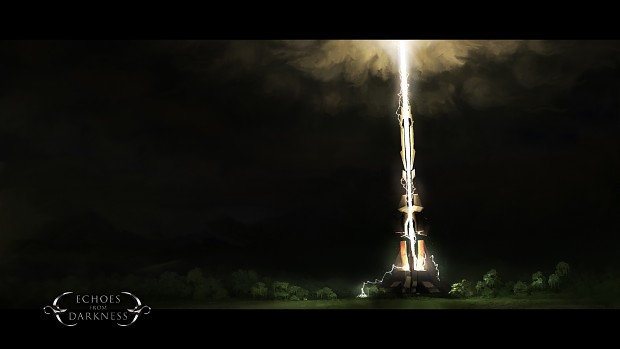 “Echoes of Darkness” uses a particular magic system structured around two categories: spells and buffs. Each of them uses the magic gauge as a resource. Here are the mechanisms.

Spells: the player has several spells at his disposal which are unblocked when the campaign is realised, and totally accessible when on the random maps.Before each party, the player chooses 6 spells among the ones at his disposal. During the party, if the quantity of magic is sufficient, the player can cast the spell he wants.

Buffs: the player can, as for all the spells, choose three buffs.However, the functioning is different during the party. A buff diminishes the maximum of the magic gauge according to the cost and, is active as long as the player doesn’t deactivate it. 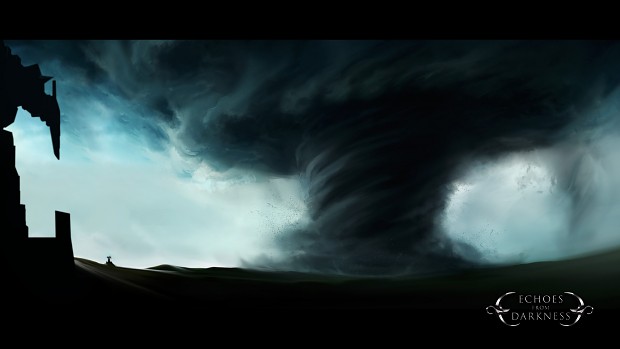 6. EnemiesLet’s talk about enemies. Each of them is grouped into two classes of four categories. In “Echoes From Darkness” enemies are either terrestrial or flying. In these classes, there are four categories: biological, mutant, ethereal and, finally, bosses.

Outside the campaign, one of the greatest things of “Echoes From Darkness” is the possibility to generate maps according to the desires of the player. The player can even share those maps with others. According to your desires, you can choose the length of the map, the difficulty, the environment type and more.

From the beginning we thought of the possibility for the players to use their own content in order to create variation of the game.

B: The team:
Here is the amazing team behind the creation of this video game. High-skilled artists looking for new and greater challenges. Without them, EFD will never exist.