In CHAOS, dungeons are randomly generated, making each game unique. The plan, the number of rooms, of creatures, quest objectives, chests, secrets paths... Everything is randomly generated for each new game started.

Exploration of a dungeon

The Game Master (the player who started the game) can set some game parameters like the size and the depth of the generated dungeon, and AI difficulty.

The adventure will start in the village and won't ends until the Avatar of Chaos will be defeated, or when the Game Master close the server.

Each floor of the dungeon is defended by a Watchman, a powerful and dread monster.
To acces lower levels and go deeper in darkness, players will have to defeat these awesome opponents first ! 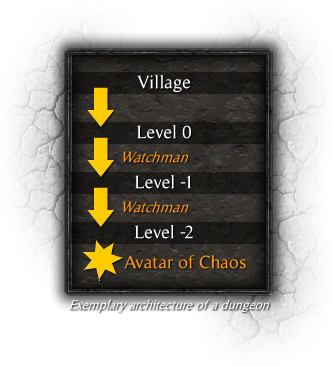 In the first room of each floor, you will find a Circle of Teleportation, used to make fast and safe trips from dungeon to village.

During your exploration, you will sometimes face more dangerous enemies than common undeads. Commonly called Champions of Chaos, these monsters are a real challenge for players and will offer an exciting fight sequence. Stay vigilant because Champions of Chaos may attack you when you do not expect it!

The Avatar of Chaos is the keeper of the deepest part of the dungeon.
This is a very powerful enemy that you will have to fight with caution, the best equipment and a coordinated strategy. Great rewards await the hero who will bring down this monster.

Some treasure chests will be hidden in the dungeons of Silmerie.
They contain gold pieces, weapons, runes, crafting materials or bonuses for your skill book. Search carefully because you might miss some of them !

The Nerhacte's Temple, God of Justice and Death, was built away from towns and trade routes. From the top of Nimde's cliffs, it is overlooking the wild plains and the huge Black Pines Forest between the two most powerful kingdoms of Silmerie: Agrimaar and Silme.
When the sun runs toward the horizon, the white stones of the temple shined in the twilight, holding light until the night comes. It is in this secluded place that Primus Paladin teaches his future disciples the precepts of their ancestral god. 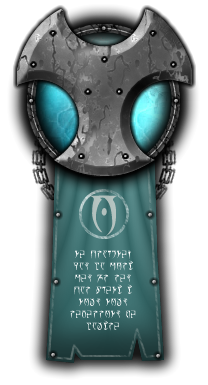 The first available dungeon is the Nimde Fault, an ancient temple of Nerhacte corrupted by a fault opened on the Deepholm. Populated of atrocities engendered by Chaos, it is divided into three distinct levels :
-Prayer Halls
-Catacombs
-Underground

Each floor offers an adventure full of battles and mysteries, with lots of quests and treasures, with creatures as terrifying as dangerous, and for the heroes who will emerge victorious, glory.

Here, some views of the first floor of Nime Fault : The Prayer Halls