Wood is an important resource in Dungeon Colony. Many objects are made of wood, wood can be used as fuel for fires and light up rooms with torches. This version adds new wood objects that you can craft:

First, there's a new coal image that replaces the old placeholder I had created:

Using wood planks you can now craft a stool for decoration:

Also from wood planks you can now craft a new crate to store all types of items:

There are 3 existing types of stock piles to store rocks, stone bricks and dirt that your minions collect. This new addition adds a stockpile to store wood. Like the other stockpiles, the wood pile visually reflects how much wood is currently stored inside. The following screenshot shows the new wood stockpile with the left-vertical one being nearly empty and the one on top is completely full: 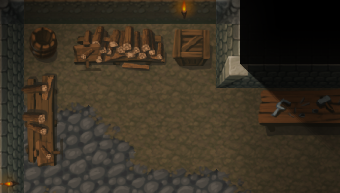 Until now, minions were using the same animation for fighting, building, lumbering, mining, etc. So this update brings unique animations to the different jobs minions perform:

I LOVE crafting, keep at it!