We have finally created ourselves a font that supports multiple languages, so now we can move on to localization! Yaay! Also, level packs.

So, I was talking to my neighbour’s cat once, and he all like, “meow, meow. Meow?” – and I was like, “Whaaa?”, ‘cause I couldn’t understand a thing he was saying to me. “English, please?” I asked him, but still got a “meow” in response. Then he left and that got me thinking… what if... there are people… that, you know… don’t understand English? Pow! Mind blown!

That means translating stuff and then showing said stuff on the screen. But other languages have all those weird symbols, right? With dots and upside commas and stuff. That’s why we needed a font that could support all that. Well, we could find some font we like and BUY IT, but that would require time and budget and we have none of that. That’s why we decided to simply roll with something that we have created on our own: 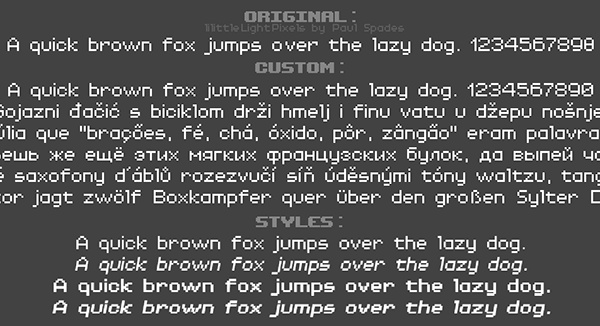 But hey, having a simple font is booooooring, so let’s go one step further and mess it up a bit:

There, now it matches the spirit of the game.

Now that we “have the technology”, we can finally think about translating the game to multiple languages! Yay!.. except that would require knowing which languages we need and hiring the translators and paying them and then putting it all together and … bah! We’ll just postpone it a little bit more. Right now, we can do it on our own:

So there’s that. It all looks pretty neat and we can add support for any language at any time. As goes for the voice, it won’t be translated. At least initially. As you all understand, voiceovers are hard, expensive and time consuming for both the developers and artists. But don’t worry – you’ll still have the subtitles, we can easily translate those.

Since we have almost all of our planned puzzles ready, we can now assemble them in packs, just like in the demo. That’s why we revised the pack selection method and made it a little bit easier to understand and use:

There are multiple packs to choose from, you can scroll through them, etc. Don’t mind the boring background – it’s all WIP, something we’ll focus on later.