We did it! We hit another milestone! We finished all the puzzles!.. but now that we look at them, many have bugs, a few work badly and some don’t work at all. But wait – there’s more! The art is outdated, there’s no fun in them, they don’t feel good – the list goes on. That’s why we’re going back to the drawing board – to fix them all! And to do a couple more things as well.

A couple more things to do 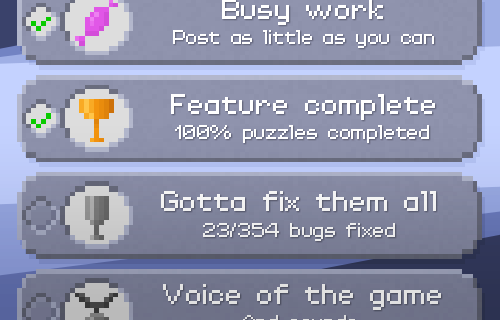 Bug fixing isn’t the only task we need to accomplish. We have to write a script for the story, add the voiceover and sounds to each puzzle, then scatter some trophies here and there. At that point, we at least should be able to play the game! That’s the exciting part!

Apart from making new puzzles, we wanted to remaster the old ones as well, adding more fun and choices to them. That could mean completely redoing them or just changing the art and labeling as “new!”. Here’s one example (you could recognize it from the demo):

When we found out, how many bugs we actually have, we realized that we need a special tool that would list all the stuff we need to fix. We already used a bug tracker software, but it was in a browser, not in Unity, and that means that new ticket creation requires too many unnecessary clicks. Luckily, the tracker had an API, so we made an editor that would communicate with it.

Now reporting a bug is just a mouse click away, and everyone sees them instantly, and in Unity! You can even play and create tickets on the go! This really speeds the whole process up.

Here’s a gif showing how the game flow will look like in the end:

(But with puzzles, of course)

As you can see, we kept the “trophy shelf” feeling from the Demo version, but added more movement, colors and decorative art. This will both add seriousness to the game, and allow us to play with the mood of each pack, puzzles or menu screens.

This is all for today! The next milestone is ironing out at least 90% of all bugs. This will allow us to make a first more or less playable version, maybe even show it to some beta-testers just to see how they crush all our hopes and dreams :(

But still, it’s such an exciting milestone!

Awesome! Cannot wait to play the finished version. This will certainly be quite interesting.

hoew do I play th game