In which new scenes are added to level two; work continues on a water-drip effect; doing so involves a minor addition to Panda3D; and the "Wandering Visual Novel" has a devlog of its own.

This week's screenshot shows another new scene to be found in the undercity of Tenereth: 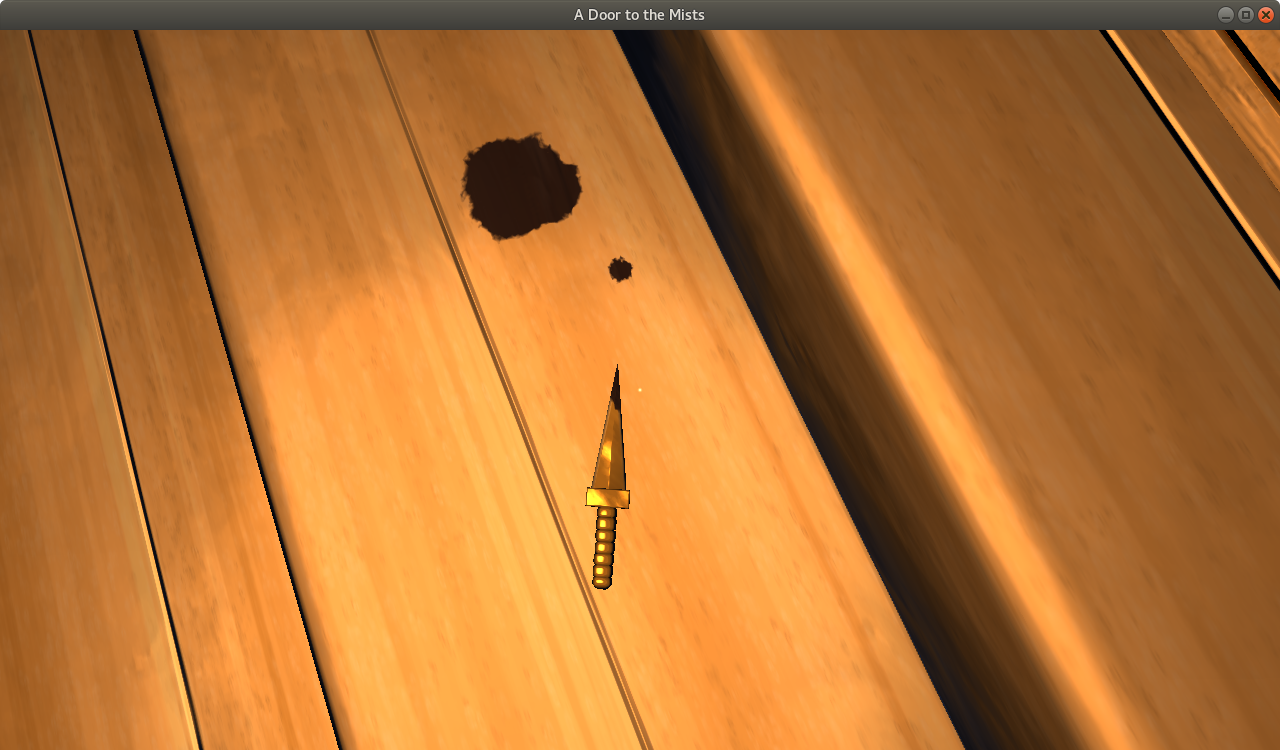 As with preceding weeks, the week just past was primarily focussed on adding to level two, with a few other things besides:

To start with, the scene shown above. It's a simple thing, found if the player explores a particular staircase: a brass knife, its tip bloodied, and dried blood nearby.

But that wasn't the only such work done in the week just past.

For one, I added a similarly-simple scene elsewhere, this one perhaps more pacific: a set of (ruined) chairs in an isolated "back-yard" of sorts, suggesting a time when people--perhaps a family--gathered together there.

And on the less-pacific side, graffiti is underway that indicates the once-presence of gangs in this part of the city.

In last week's blog-post, I believe that I briefly mentioned work on a "water drip" effect; in the week just past, I continued with that.

I had already discovered that there was a complication to this endeavour, I believe: There seemed to be no way to reliably offset the moment of a particle effect's first emission. This meant that it was quite difficult to have two effects with the same emission-interval, but with one staggered by a set time relative to the other--as in the case of a droplet falling, followed by a splash as it hits ground.

I tried using Panda-provided mechanisms to enable the "splash" effect after a given period, but of those only one seemed reliable--and that one appeared to give the effect a finite duration.

A simple solution, it seemed to me, was just to offset the particle-effect's internal timer. That way it would naturally start after the desired time had passed, and in a way that should keep its timing consistent with that of the "drip" effect.

But Panda seemed to offer no way of actually doing that.

So, with the go-ahead of a Panda dev, I set about implementing such functionality. It took a few iterations to get everything both working and acceptable for submission (especially given that I wanted it included in an upcoming minor release), but save for unit-tests I believe that it's done! ^_^

And having that functionality, I believe that I now have the dripping-water effect done, ready for minor adjustment when next I export the level. Indeed, I've also added a (possibly work-in-progress) sound effect to go with it.

And other than the above, a few things were done that don't seem worth detailing (such as an optimisation to the setting of the in-level "object of interest" text).

And finally: You may recall that in previous dev-logs I mentioned a "Wandering Visual Novel" side-project. Well, today I posted my first dev-log specific to that project! For now it's only being posted on TIGSource and my own website; I have it in mind to start posting it on IndieDB when the project is further along.

As to the game itself, it's currently going under the simple working title of "Temple VN", and is a story of exploration and the rediscovery of a salient religious document.

You should find the new dev-logs here:
TIGSource
My Website