Hello my name is Chris Sprance one of the lead artists/developers at Entrada Interactive working on Miscreated. This week Terry is out of town on a much deserved vacation to the Dominican Republic (Lucky dog) so I'll be doing the update. Enjoy!

We've been working hard on a lot of things this past week. Allesandro is putting the final touches on a bandit Character he's been working on, it's looking excellent and we can't wait to show it to you. We've added a few members to the team, as well as gotten the ball rolling on the Recurve bow. Arrows will stick into objects now and penetrate certain distances into an object (your skull for example) depending on the material you hit. We've also been having pretty regular and successfull play tests. What that means is we're nearing a stage where we're going to start bringing a few people (very few) to help us test in a pre-alpha. Once we hit that milestone we can begin to give everyone a solid timeline on the closed alpha. It's getting very exciting!

I'm posting an image of the player graves I completed recently. Whenever you kill (murder, push off a cliff, drown, shoot, hatchet, run over

) someone this trunk will drop to the ground containing all of their loot. Anyone can access this container at any time and it will stay for a predetermined time at which point it will be removed (along with all items). Originally we wanted to have the players body stay behind complete with all clothes/weapons (in a way similar to Fallout/Skyrim) so this may be revised further. 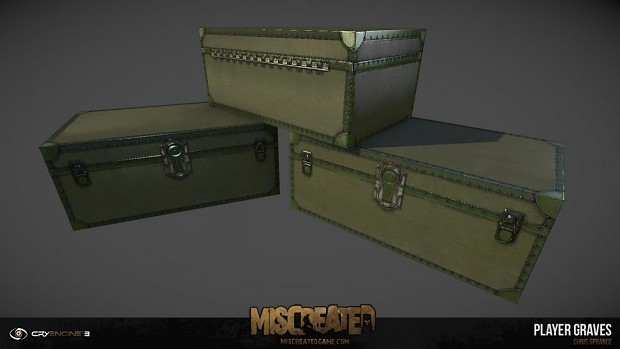 I'll include a small work in progress of the bandit Character in engine, just because it looks so good already. 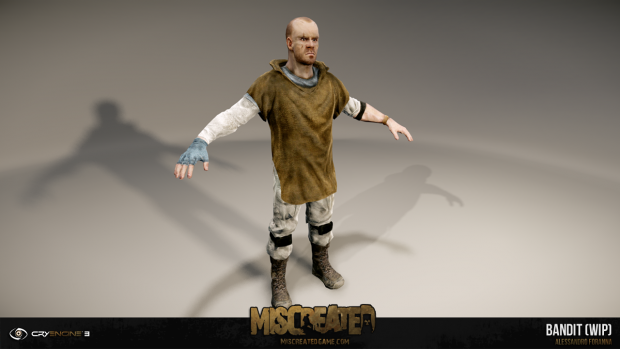 So that's it for today, if you have any questions feel free to fire away.

If you stick to the loot trunks, would you be able to boobytrap them? Not necessarily to kill whoever opens it (unless there's a relatively easy way to figure it out). I'm thinking more among the lines of triggering a loud instrument to attract enemies (both NPC and players) or some kind of gas to distort vision or movement.

It would be better to keep it real and not add any alarm system in the grave. On the other hand, it would be a good idea to add boobytraps around the graves.

Could you elaborate as to why boobytrapping the grave itself isn't an option, but boobytraps around the grave is?

If someone loots your grave I think it's "real" enough if they wire the opening mechanism to an alarm system, for example.

What you gonna do with all that junk? All that junk inside your drunk?

The grave will have dead character's items. These items might be considered as junks or as useful.

The Bandit looks pretty authentic already, good job with it.

Thank you. Our 3D Artist did a very good job. We are glad that you like it.

This is looking great! Been following for a while and it certainly has improved.

You guys keep amazing me.

It's great that you like Miscreated. What are you looking forward to see the most from the game? The Construction System maybe? Jump in our forums and check out a lot of Game Suggestions made by contributors.

Interacting with other players is high on my list. Also, who doesn't like building their own fort. ;P I hope for some hardcore game mode though. For example: 1 headshot = dead. I like games with challenges.

EDIT: ughh, it replied as guest for me.

We will have a Construction System as well as Hardcore gamemode which will make it the matter of survival even more challenging.