Welcome to the first dev-blog of Sol Magica, a first-person dungeon crawler which is currently in early Alpha development. As the game's story and core mechanics evolve, and the script gets ever longer, writer jjc_uk takes some time out to discuss the importance of story to the game experience.

Gaming's intelligentsia love to discuss the relationship between a game and its story. For every advocate of games as a next-gen story-telling technique, there's a stalwart denier of a game's ability to effectively convey the most rudimentary of narratives. The best game stories are experienced, they say, not simply told. Besides, game stories are so limited by game mechanics and player agency - both of which a story must be a slave to - that their plots tend to be simple to the point of banality.

Although I like to ramble about it in pubs sometimes, I don't know a great deal about all that. But I'm pretty sure that if a game has a compelling story, I'm more likely to play through to its conclusion. A strong narrative, built either on a mysterious plot or convincing, charismatic characters, can genuinely inspire you when the gameplay gets a little tired. Without the impetus of story and character, I'd never have finished Mass Effect, Remember Me, or any of the Command & Conquer campaigns.

I think about this sort of thing a lot while trying to write a script for Sol Magica (a first-person dungeon crawler in a traditional high-fantasy setting). I'm quickly learning that there's more to writing a game script than simply filling out a plot to tie the levels together. Writing can develop atmosphere and immersion, enhance core game mechanics, and impart consequence to player actions beyond the mindless accrual of experience points. And not just in the briefings or cut-scenes - but in the menus, incidental dialog, tutorials and skill-trees.

This is why a lot of older RPGs, like Baldur's Gate and Planescape: Torment really stand out in people's minds. Those games encountered restrictions in their display technologies and game mechanics which they could only overcome with words. And it turned out that words were a natural and effective compromise - because the sorts of people who played RPGs in those days were often the sorts of people who read multi-part epic fantasy sagas (ie, me). When the player accepts those words, they're likely to have a more personal, involved experience. 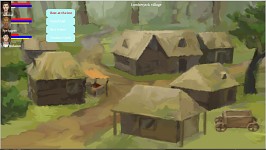 Like those classics, Sol Magica is about exploration, personal growth and embodiment in another world. But being an indie project, resources are scarce and we're all learning as we go. The game already has some lovely art which helps flesh out the worlds in which the player will explore - but assets are expensive. Besides a world built only out of pictures might not be a very interesting place to hang out. Meanwhile, the exploration and combat mechanics that Sol Magica uses are well-proven and well-loved, but I think a really compelling game needs a little... seasoning. A touch of salt, a pinch of pepper.

So when I joined the Sol Magica team, it was clear to me how important a good story, strong characters, and an immersive world were going to be. There are only so many places where an RPG can succeed: the combat system, the character development, the world in which you explore, the people you play with, and the story which ties everything together. My job with Sol Magica is to make sure that the story (and to a lesser extent, the world-building and character skills) are as good as they can be.

We've got a plot planned out - and there's no surprises: the world's in serious trouble, and it'll take a heroic youngster to stand up and save the day. As a writer, I long for nothing more than to avoid cliché and subvert the norms of the genre. But without a story with this sort of template, there's simply no justification for the rest of the game.

Where I really plan for Sol Magica's story to stand out is the details; the bits which you don't really notice while playing. We'll have cut-scenes and conversations which guide the player through the main plot, just like everyone else. But we're making sure that player decisions have meaningful impact - not just on the story, but on the gameplay. Every dialog, every skill tree, every menu selection and quest reward, is a potential place to impart a little more depth and a little more character. To give Sol Magica the story and atmosphere it needs, we're trying to imbue every word, skill and decision with meaning.

Don't get me wrong: Sol Magica's story isn't going to turn the industry upside-down, nor is it going to teach Bioware anything about making story-driven games. But we are ensuring that the story makes the game better (without having it feel like an interactive movie). We want a story which encourages the player to look deeper and play longer, and we want the Kingdom of Lyria to keep living in your mind after you've closed the game client. 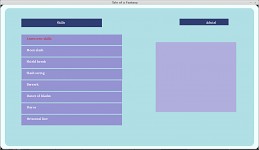 Being a proper RPG, Sol Magica is full of menus, just
waiting to be populated with story-focused text