This update, more numbers were added because the game lacked them before, and now the numbers get their own menu screen!

When I say numbers I mean stats. HYPEHYPEHYPE. So this week I added some more statistics to the menu, and this time it's not just the two highscores in the bottom, now they get their own screen. Some things added include total time spent in game, average time per run, total kills, average kills, and total runs. There will be more things added, but I'll get to that in a bit. 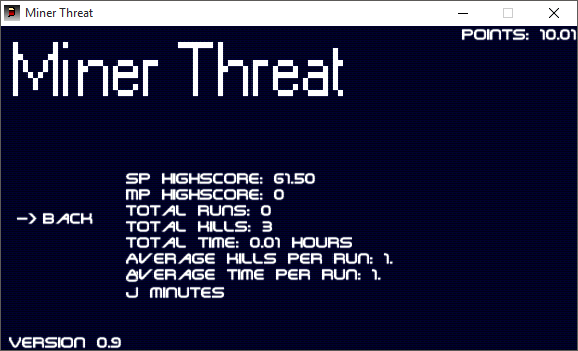 Whenever I release an image, I notice problems. For one, that whole text body should be moved a little to the right, and the bottom text is completely messed up. Whatever, I'll fix it. You guys get to see the stuff on the bleeding edge here.

I'm saving the best for last. One of the other things done is fix some rather daunting issues. The less ridiculous of the two is when you jump out of the room, the game crashes, which is obviously fixed. Now you can't jump out of the room. (Like that was ever a major feature...) The other fix is for the AI that decided it doesn't have to be subjected to the standard gravitational pull emitted from the planet. My favorite bug was when I was on top of a building, then the enemy just popped on top of it with me, not even jumping. That's fixed now so don't worry. As a side note, I added the run score to the death screen. 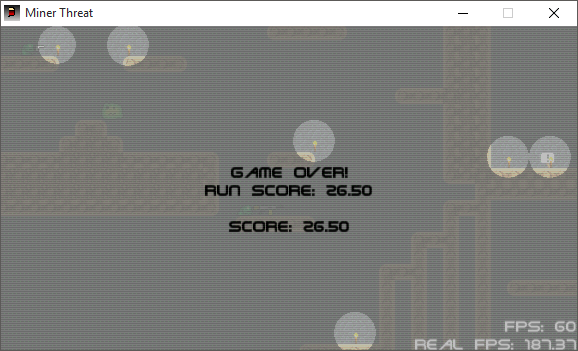 Notice the space in the middle; if you beat your highscore, it will tell you there.

As I was saying, best for last. I don't know if I mentioned it before, but an endless mode was planned, and an endless mode is now being executed. There is two ways to do an endless mode in Miner Threat: endless number of levels that get harder much faster, or, a wave based room. Dan and myself decided on the latter, thinking it will be much more fun, and has lots more potential. It's unplayable right now, but just know if will be shipped out with an endless mode. And for the record, that was the other score I was talking about. Since I have nothing to screenshot for that, here is the new modified shader. The only difference is that it now renders the little green dots before blooming the screen. 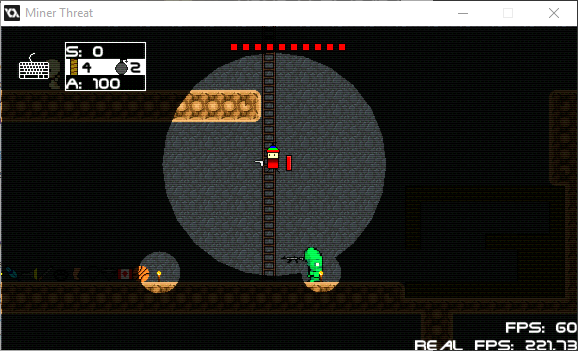 I thought about the release of Miner Threat today -- not the release date, but the things it will ship with. (As for release day, it'll be released when it's released.) There is a huge folder full of everything Miner Threat related on my computer, so I think it will come with it all. That includes past builds, test graphics, notes, all the media, all the text files and spreadsheets, and more. What won't be in it is the source (Because I have over 20 backups in .gmz format.) and the OST, because the OST is property of Teknoaxe.com. Anyway, have a nice weekend.