So we actually started working on the boss for Miner Threat this week, and it's looking pretty good so far.

As the summary states, the boss has been started. I've written zero lines of code for the boss, but Dan has made the boss sprite and I made the tileset for the boss level. This happened yesterday at 5:00PM. But I did do other stuff, mainly including heightened difficulty, new item, and directional bullets.

(Pause for a sec so I can make an EXE to get some screenshots... Done...) Okay, with my exe in hand, I can get some screenshots. Anyway, first mention-able thing is the new tileset and boss. I won't mention the boss because of spoilers, but I will happily show off the new asphalt tileset. 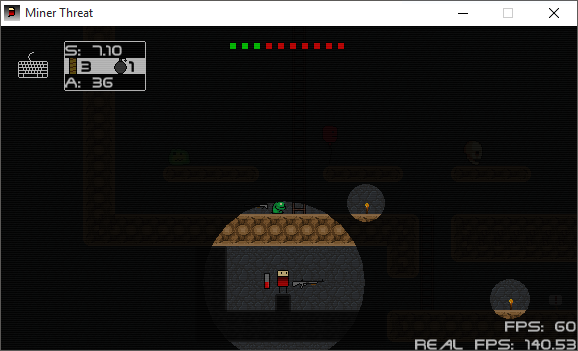 I actually just thought of something. The next dev blog is on Christmas. Imma get something good planned for that one. Planning starts now.

The new item that is now in the game relates to another concept that happened this week. Before, inaccuracies in your weapon were on the y axis. This means that your bullet might start 2 pixel above you or 3 below, or on you. This was obviously a bad system for inaccuracies, so now it's based on direction. Now there is a certain range of directions the bullet might go in.

Now that you understand that, the basketball item which is new has a very special effect. Basically, there is a one in ten chance every shot that it will be much more powerful. BUT, there is a one in ten chance it will go hay-wire and increase the inaccuracy. Here is a visual to represent it; the blue represents where the bullet might go. The diagram on top is what happens normally, the bottom is what might happen with the basketball, obviously a much higher radius. 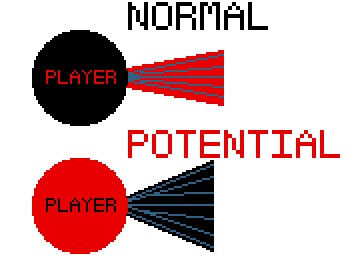 Here is a gif to show off the directional bullets.

The next major notable thing is that I removed encryption from the save files, so have at it. Other than that, enemies are 4x harder each level, so it's harder.

That's about it for notable things, so tune in next week for more meenr thret (or Miner Threat)