The visual journey of High Moon and its inspiration.

This update is all about the art and the inspiration behind it, and it's being written by myself (Stephen Gibson, Art Guy and Designer).

I'm going to be fairly informal in this post, it makes it easier to get the words out if I can speak freely. So let's get to it!

When I first started designing the art for High Moon I had no idea what direction I was going in, but I wanted the game to be as simple as possible so that it could be produced quickly. Check out this early screen of the game: 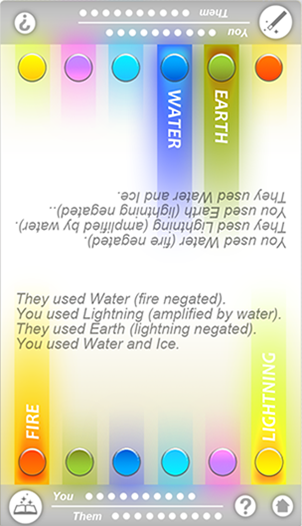 That ended up feeling way too basic, no one was going to get overly excited about it. And I soon realized that there was way too much information to share with just text. From there I decided to try my hand at something a little different, with a little more character...Pixel Art!

Awful, isn't it? Now, I had never done pixel art before but I've played my share of pixel art games and have been admiring it for years. Adding characters required a bit of a UI change, which brought me to here: 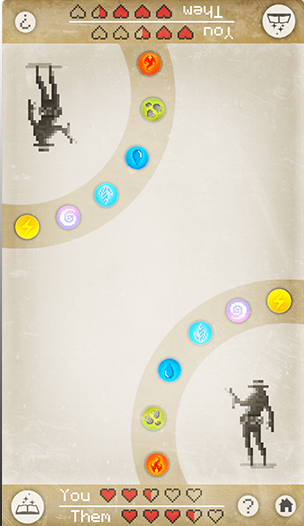 Still, not great, but it started to take shape. Confession: I love Sword & Sworcery. It was my main source of inspiration for trying to create pixel art. I was unsatisfied with my initial attempt so I took another stab at it after studying the Superbrothers' art a bit more. I ended up with something quite similar to what I'm using today:

That's Westwood. As you have probably noticed he's still in the game. He was my first successful pixel character and has become somewhat of a poster child for High Moon. 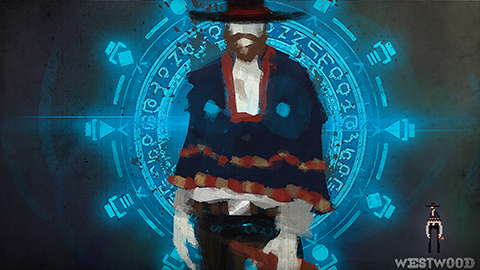 After I established my character style for the most part with Westwood, it got pretty easy to create more characters.

Now... why on earth did I make cowboys when I had a dueling game revolving around magic?!? Really it doesn't make sense, I just hadn't seen it before and I just love that whole Western feel. Cowboys and Aliens anyone? Loved that movie! And it was a great mash up of Sci-fi and Western. I thought, hey... why not mash up Magic and Western? Heck throw in the Sci-fi too! Throw it all in!

I went a little overboard. I started plotting out a story that revolved around a group of Cowboys being "sired" (Inspiration from Vampire Diaries...yes I watch that show) and thrown into a blood sport where they dueled to the death with magic against each other, devils, vampires, aliens...anything. I took Funcom's "The Secret World" approach where every myth and legend was true and worked it into one story. Also, almost everything in High Moon is a spoof or homage to something I love. 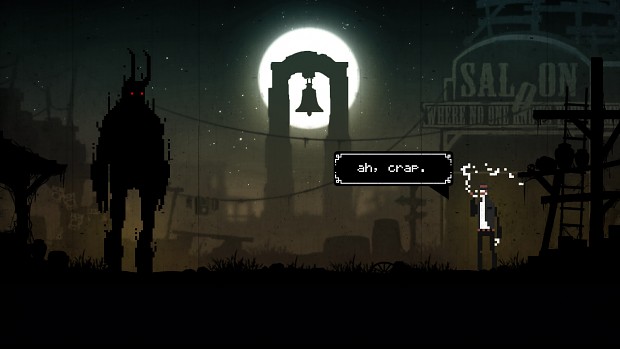 The overall style of the game got much darker and grittier but I wanted to keep it light-hearted too. I accomplished that by adding in silly animations and speech bubbles with goofy dialogue.

You can see from the last screenshot, things changed a lot. They had to change, the rule set for each element and how they played off one another got much more complex and that information needed to be conveyed visually more than through text. So I had to re-design.

Almost everything about this game was a first for me. I had never designed a UI before, pixel art, or animated sprites. I was in a little over my head but I managed to pull it off well enough where I wouldn't be embarrassed to show it.


You can see I changed from my goofy icons for the elements to basic shapes. This idea came from a few places, mainly Sword & Sworcery with their use of basic geometric shapes for particle effects and the whole "Trigon". That mixed with Daniel Luvisi's glowing red triangle on Gabriel's helmet and my love for neon lights.

As for the colors, I just picked what made sense with each element, nothing special there.

Looking back on it all now, you can see how far I've personally come as a designer/artist. I remember the Fire Shield animation took me a week to get it looking good *shutters*. As a team, we're not finished in terms of the UI, Elemental Visuals, Characters, Environments, etc, but that all comes with time as we continue to refine our ideas and work away. Some days I just try experimenting to see if I can come up with something better, like in this image: 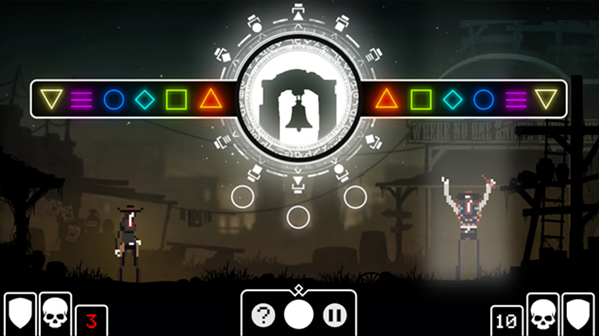 You don't always know where you're going as an Artist, but there are those beautiful moments when you arrive and it was totally worth the pain and frustration. I'm thankful for my partner James, who has been very flexible as I've redesigned the game throughout the months. The core of the game has never changed, and was actually developed years ago, but how that core gameplay is experienced has evolved into a much stronger creature.

One last thought. If there are any artist's reading this who often feel overwhelmed by the amount of amazing art out there that is better than yours...that's normal. You just accept that you aren't the best and move on to do YOUR best. Because in the end, that's all that you can do. You should never be dissatisfied with your best.

I'll leave you all with a few new environment and character mock ups, enjoy! 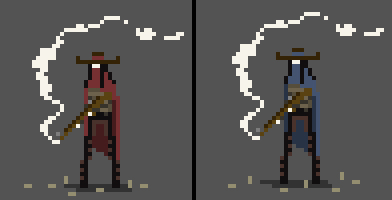 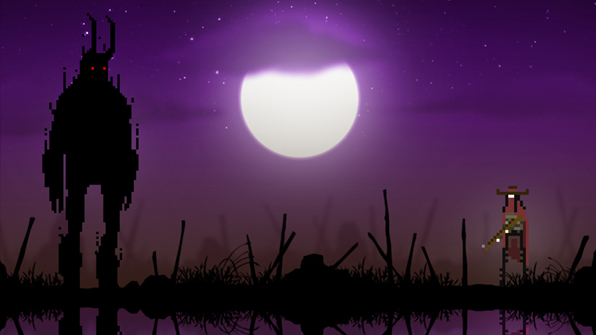 (This one is titled "River of Sticks", a spoof of the River Styx from Dante's Inferno) 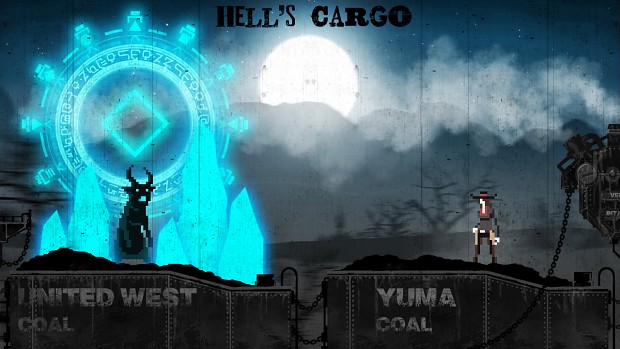 "those beautiful moments when you arrive and it was totally worth the pain and frustration" - Wow. Thanks for taking the time to share with us all how hard you have been working and how far your design has come in just the past two months. This game reminds me so much of another strategic spell dueling game that has been on indieDB for some time now called Shaman. In fact, the similarities of your design/UI layout/icons to those used in Shaman is pretty staggering?(Disclaimer: I know this because I am the designer of Shaman). Best of luck on your development, and I look forward to seeing where all your talent, hard work, and observation leads you.

High Moon is inspired by a number of games, but not by your work. From what we have seen, the two games are quite different in almost every way, from gameplay mechanics, through to story and concept; as we have responded to you on Twitter. We understand that you have put a lot of work into your project, but to suggest that our work is not our own is quite hurtful. We work extremely hard on this game in our spare time, and it's unfortunate that a fairly small coincidence is being interpreted in this way, and that you chose not to contact us directly on the matter.

We remain committed to our project and our design and offer our support and encouragement in your own project. If you'd like to discuss further, please contact us directly.

Don't worry, we are in the process of contacting you directly.

@operator-23: Today is my first time to hear about either of these games and I must say I truly do not think you have been "copied". The interface is not very similar to your game. The icons are similar but it is because they are basic geometric shapes that have existed as alchemical symbols for ages!

I think you are overreacting and your passive aggressive comment comes off as petty.

"The interface is not very similar to your game. The icons are similar..."

How does that work exactly? In the first sentence you say the interfaces are not very similar, but in the second sentence you try to defend why the icons are similar??

Are you sure you're really compared the two games objectively or are you just making a quick comment on something that is a serious matter?

Hmmm....I'm sorry I don't see anything red flag about High Moon. I've checked out Shaman and it seems like a very interesting game but nothing even remotely close to this one. Best of luck on your development with Shaman and I look forward to the next time you make a rude comment on something to do with this game. #actuallyidont

So your evaluation was very thorough....NOTHING EVEN REMOTELY CLOSE TO THIS ONE. #exceptthegameplayandsameui

Hey guys, you have a really nice trailer and an awesome artsyle. Keep it up! PS: who is the artist?

The artist is Stephen Gibson, his online portfolio is www.ssgibson.ca if you want to check out some of his other stuff.

Wow! I am very excited for this game to hit market. I think you are very original with your concept and the art is phenomenal!!!!