A little article about spaceship controls in Tannhauser gates, enjoy!

Posted by TannHauserGates on Apr 8th, 2013

One can't hammer enough how much control is important in a spaceflight simulation.
Let's face it, most of the space games ( and not only the top bottom ones ) don't offer that much control on space flight. What I mean is.. most of the time , you get to chase one each other or simply go over and over again the same target without that much control. Worse, to avoid any trouble managing those control issues, lots of games avoid collusions with lets say asteroids, where I think that obstacles should be taken in consideration to create a more tactical and immersive experience. Eve Online on the other end has a nice orbit mechanic, but no real direct flight controls, witch is ok for big ship maybe but not for fighters...
I'm not saying we found the Holy grail there, but we are certainly chasing after it ;)
Our first final ( V1.0) flight sim has lots of different controls available to you. 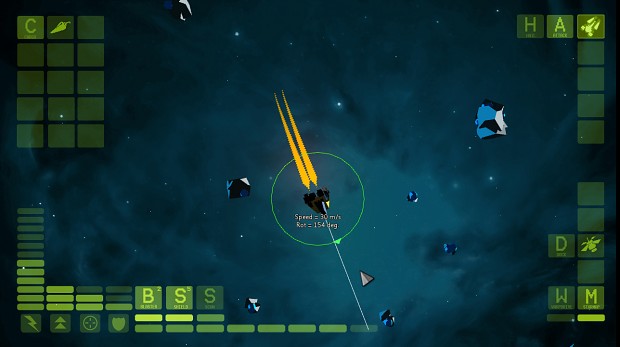 Heading control: click on empty space to setup a heading for your spaceship.
Depending on its engine abilities and speed, it will align and follow the new direction with more or less rapidity.
Direct control: you can now turn your spaceship directly by using arrows. the ship will of course rotate at the pace given by its speed and engine abilities
Orbit control: click on an object in the game to make the ship follow that direction and try to reach it.
when flying on lock mode, you can still use the arrow keys to make some left and right strafing. can be handy to adjust aiming, avoid collisions and manage perfect orbits.
All those controls can be used seamlessly, so it is up to you to pilot your ship the way you want or depending on the situation you are facing.
But there's more!
All ships come with 3 different Gears to have a better control over the speed and also to address some energy management ( that is a tactic layer we are still working on, we will discuss about later ;) )

Here are our three different engines, the Arrow, the Drifter and the Orbiter.
While we are at it, I added a sneak peek of the three main categories of weapons we are going to develop soon, so that makes a total of 9 different fighters ;)
more on our blog here: Spacecloudstudio.blogspot.ca