Information about the department of Religion, one of the 5 principal departments in Brunelleschi: Age of Architects.

Department
There are so many things to manage that these tasks are split not only by District, but by Department as well. Every Department includes 13 Districts and is populated by their Ministers. Each Dept, unless set otherwise by the Civic Systems and Laws, oversees one of the five primary settlement concerns. The Departments are Defense, Interior, Commerce, Religion and Education.

Religion as Community
Districts in the Department of Religion are not all dedicated to promoting settlement Faith. This department is concerned with the well-being of all citizens and the uplifting their lifestyles. As wealth and technology becomes more available in a growing settlement the Department of Religion expands to offer services to the people, from the Town Square to the Sewers.

Settlements that want to move past Rank 1 must build a Town Square, creating the first seat in the Department of Religion. If a minister is hired, they will take on the title of Prefect and will be assisted by a currently invisible Prefecture ministry. This district is the source of the Courthouse, the first place where prisoners can be held and a center of civic life. Cottages are best served in the Town Square and the exclusive Barber Shops allow Prefecture to the sell Tinctures to Peasants and passively increase local Health. Citizens with a courthouse have the ability to Vote. 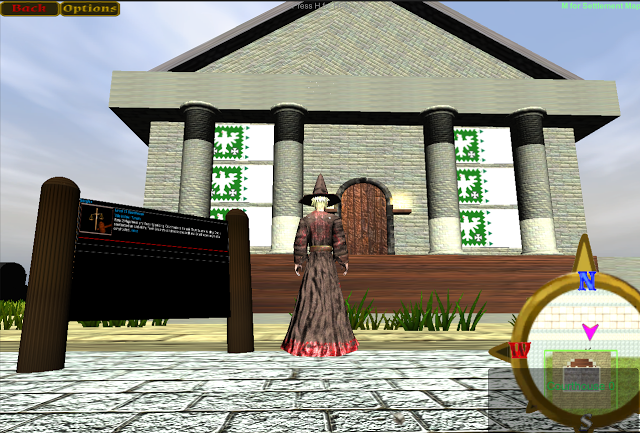 When a Settlement reaches Rank 3, they gain access to two more districts in the Religion Dept. The Plaza is not necessarily dedicated to worship, but to improving the lives of all residents. The Central Fountain is a powerful Health monument. Not only does it increase Settlement health with every level, but it heals the wounds of player characters who drink from it. The exclusiveColonnades provide a clean, if somewhat exposed place for Heroes to live and show themselves off to the people. And while actually making bricks in the linked Brickmaker lowers local health, the tightly-built warm homes and businesses improves the lives of everyone in the settlement. The Minister of the Plaza is the Pursuviant, who leads the Beautification Ministry.

While the Temple District isn't the first district in the Department of Religion, it is the first center of worship available to sovereigns. This district focuses on raising the Faith and Health of the people. For every level of both the central Pantheon and every Churchbuilt around it, the Faith of your entire settlement rises. The Linked building provided to all districts is the Chapel, which creates a powerful Faith bonus in the district it's been built. Peace and quiet in the Temple district allows players to Mediate and restore their Magic. The Ministry of Religious Affairs tends all of the temples within and are led by the Reeve. 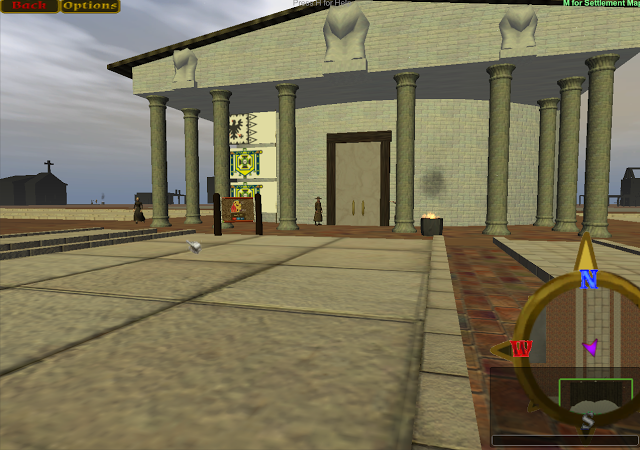 Tons of Grain can be processed through the Central Commons. Everything about this district is appealing to Peasants. They love to gather in the shared Dining Hall, consuming meals with bread baked fresh in the building. This building provides local Health and Exemplar rooms with each level. The linked Bakery stems from the Central Commons but can provide delicious bread processing to all districts. The Tavern is another source of both grain-processing and Exemplar housing. The Beer produced here is another big hit with the local Peasants and resident players regenerate Magic more quickly. With all this communal space already available, throwing a Community Event becomes possible once the Central Commons are built. 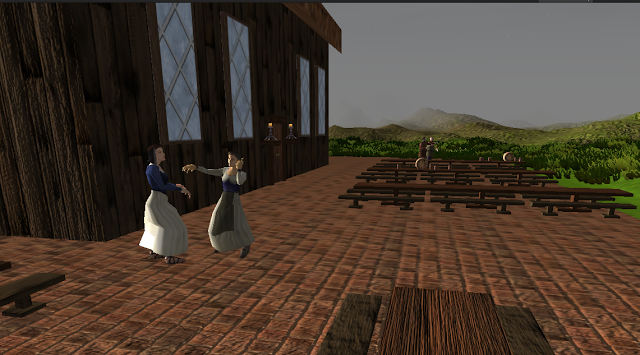 The people love a Parade and there are many beneficial uses for the land between celebrations. The Parade Grounds, as another center of community activity, naturally belongs in the Department of Religion. It is led by the Minister of Heritage. They and the Heritage ministry track all the important people and events in the settlement and ensure they're properly represented at each Parade. The buildings of the Parade Grounds are capable of raising 4 of the 6 Happiness types, as well as selling Bread to Peasants who come to celebrate and training Horses from Livestock. Players who visit the district can engage in Riding Practice.

Every single building in the Poor Quarter houses a comparatively large number of Peasants per building level. Building one is a settlement's statement of wanting their poorest population to swell quickly. But who cares for these tightly packed masses? The Department of Religion takes responsibility for these souls and the Almoner tends to them as best they can, backed by the Ministry of Welfare. They do their best to keep the many Peasants well but local schools will be challenged to keep up with the production of poor children in the Slums, Co-Ops and Tenements. Players who want to wish to give their money to the poor can find many empty hands to Give Alms.

The Service Sector is the only other required district in the Department of Religion. The Firehouse serves as it's main building, providing a local and settlement Health bonus. The exclusive Hospital provides a local Health bonus and processes Herbs into Tinctures. Finally, the linked Aqueduct is a display of impressive water-technology that improves living quality for every single resident, improving Health and effective population capacity settlement-wide. The leader of the Service Sector is the Chiurgeon General, head of all the Hospitals and the Ministry of Human Services.

The Boulevard is an optional district of refinement and culture. As a Settlement grows, the Department of Religion can care for more than just the basic needs of the people. The Event Coordinator and their Tourism Ministry tend to the beautification of the Boulevard. Players walking in this refined environment regenerate faster and increase their Charm temporarily. This early jewel centrals around the Department Store, the first building that crafts every kind of Gear. It also trades Canvas to Peers for Florins and is a serious local Security risk. The Boulevard's exclusive Boutiques can only be built on the Boulevard, but access to them raises the Charm of every citizen. Pet Shops, linked but available everywhere, train Fledglings into valuable Pet Birds.

Tending of the dead has always been a duty of priests. With the advanced tunneling ability a Rank 7 Settlement requires, vast catacombs can be dug beneath the city. Dead player-characters stored in these tunnels don't suffer penalties for spending time dead. The central Inner Sanctum is a beautiful underground chapel along with it's extensive chambers for Player burial. This building earns a stack of Litra for every player death in the settlement. Exclusive to the Catacombs, the Charnel House is the most compact way to store your dead. It earns a Florin for every player and Peer death, but lowers local Health. The Burial Chamber can be built in any district, even before the Catacombs are built. These can store a few dead and gain a Thaler for every death, player or NPC. Clean and honorable corpse management raises the Faith of your entire Settlement. This blessed district is run by the Cantor and their Parish. Players can gain experience by Patrolling for Grave robbers.

The Rank 7 tunnel technology also unlocks the wonders of an underground sewage system. It's primary function is to increase Health in your settlement. Flowing clean water and refuse removal is key to keeping disease out of your populations. The sewers are overseen by the Chief Custodian who is supported by the Ministry of Sanitation. This district ends up in the Department of Religion because no-one but priests will put so much effort into something that's only profit is other people's happiness. Players looking for a personal benefit from the Sewers can always go hunting for mythically huge rats and pet crocodiles.

The Grand Promenade is a festival road around the rise of the Acropolis. The main stretch of this road is the Boardwalk, an incredibly exciting but unsafe place. It creates a tax bonus with every level, makes glass use more efficient in building, and increases Prosperity with every level. Peers love to live in the Studio apartments, exclusive to the Promenade, and each Studio generates Thalers per peer in the district. Linked Art Galleries sell Canvas to art-happy Peer residents and increases Prosperity. The Promenade is managed by the Minister of Arts, supported by the Ministry of Arts. Players visiting the Promenade are welcome to buy some paints, get a little sloshed, and create some artwork.

This is where Triumphs were held, one of the highest pre-catholic roman rituals. The Monument District is built and tended by the Grand Curator and the Ministry of Culture. The Triumphal Arch is an inspiration to troops throughout your settlement. A few privileged Peers will be trained in it's shadows. Cenotaphs are special statues built to house the dead, and are the only dead housing not connected to the Catacombs district. Linked to the Monument District are the Stonecutters, because you can't build all those monuments without a massive source of marble Slabs. Players looking for an activity among the Monuments an strike a pose and offer a Patriotic Speech. Scrubbing all those fine marble walls are the Ministry of Culture, led by the Grand Curator.

The finest and most religious district of them all. While the existence of a Pope in the game depends on the players, the Ministry of the Vatican Hill is the Papacy. The Minister of the Vatican is known as the Apocrisiarius and is the de-facto leader of Department of Religion when in office. If a player has achieved the rank of Pope, they may take residence in the Vatican. Building a Basilica is a great way to show support for the Faithful in your settlement, and in return you will receive more taxes from all districts in the Dept of Religion. The exclusive Instituto per le Opere di Religion is a religious school that can only be built on the Vatican Hill. These increase settlement Storage, clergy taxes and Education with every building level. Monasteries stem from this district, but can be built anywhere. They will produce Beer, Bread or Wine, provide a prison cell and provide a Faith bonus in their home District. Players who wish to do more than pray in the Basilica's breathtaking chapel can always find a corrupt priest to Buy Indulgences from. 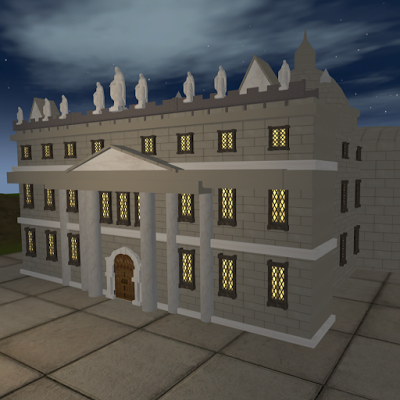