Wow, we have over 11k people on the wishlist, many followers, and many players Scouts giving us valuable feedback. And trust me, we love feedback! Now, we need more Scouts and more feedback.

Wow, we have over 11k people on the wishlist, many followers, and many players Scouts giving us valuable feedback. And trust me, we love feedback! Now, we need more Scouts and more feedback. 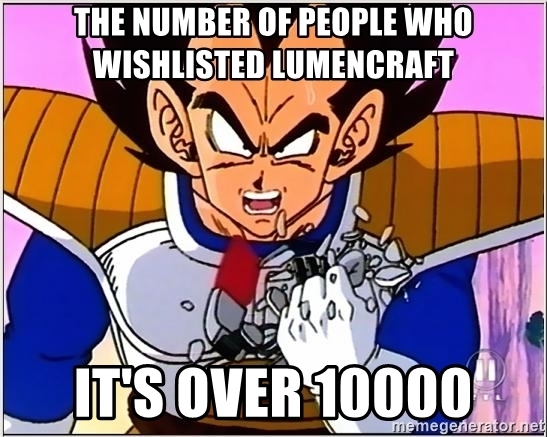 We decided that a good way to extend the Scout’s ranks will be sharing the demo with players from GOG! Get ready for Made in Poland! Festival of games made in the country of Lumencraft. There are some updates connected with operating systems. And, as we are not over Halloween yet, some scary news about Demo’s future...

Demo update!
We were getting questions about Linux support and heard about some problems with playing Lumencraft on this operating system. Not on our watch! New build solves problems we know about. If you find anything else, feel free to share it with us.

We also UPGRADED many things. New graphics, new mechanics, and many fixes.

There are some changes to the map, but if you want something new…

Demo on GOG!
We would love to see more Scouts in our ranks! So we decided that Made in Poland event is the best time to share love and lumen with GOG players.

We also want to test a new design of the environment without deleting the original one. That's why new demo on GOG has a new map!

If you are interested in how we changed things around, feel free to check out GOG between 8 to 15 November. Why till 15? Because it's time to work on a big update 😎

Turn up the lights!
Originally Demo was meant to be there for ten days. It kept getting extended and extended, and in the end, everybody forgot about the deadline. We are so happy to see you happy playing our game, but we need to work on it. We don’t want you to play an old and outdated version, so we have to take it down for some time.

You still have more than a week (15th November is the last day) to try out Lumencraft DEMO. If it’s not enough… Well, you have to wait. “Wait for what?”, you may ask. Wait for all of these beautiful features we listed in our roadmap, which we'll bring to you next week.

Once again thank you for your support. The Demo will be back when there will be a suitable occasion for it, so no worries. Stay with us! We will share our progress on social media and Steam.

Join our fight! We need your drills!
2Dynamic Games