Updates on concept art, modeling, programming, and animation, including some exciting news about our mocap operation!

By now now you are probably sick of left-over turkey, so we decided to give you an early update. Yeah..those two things don’t even relate. I know.

This week these updates are both a combination of Dark Storm: VR Missions and Dark Storm: Ascension.

Last time we showed you quite a bit of animations using various methods. We’re concentrating on animations more now, and what you see currently is a work in progress.

Furthermore, we have a bit more on our plans for animation below.

Here is a bunch of animations in gif format. Did you have that grandma that had a room full of dolls that creeped you out?

Single death animation (this is presumably a bullet to the chest):

Now these are all key/target framed animations. We’re hoping to blend these with some mo-cap or varied animations in the future. Death animations will be dependent on what type of fatal wound you receive.

But that isn’t enough for us. No sir!

We’re working on implementing a full space for most of our team (mostly the voice actors of course) to arrive and perform motion capture for Dark Storm. The motion capture system will be used for cut scenes, and some other gameplay related scenes.

Below is a demo setup that will be similar to what we come up with (what is pictured is not our setup). What’s interesting about this setup is it’s capability of capturing 3 actors at once in the field, which makes it ideal for cut scenes. This will take roughly 3 to 4 computers to capture and process. The cameras? The Playstation Eye believe it or not (along with special depth sensors). With a circle of up to 12 of these you can capture every detail.

We’re still gathering all the gear (*cough*black friday*cough*) and peeps for this currently, but we’ll be ready to start in January…..ish.

Here are some photos from the software website to show how it'll work:

You can use three of these cameras in a minimum set up. However, we're going to use 12.

This photo shows how the cameras are set up, to capture every angle, and in some cases multiple actors at once. What this does is allow us to create scenes and interactions without trying to run one actor at a time and then implementing them with each other in the engine later on. So if you see a character being assaulted by another character. Those two are actually being played by two people interacting at the same time within the mocap session. 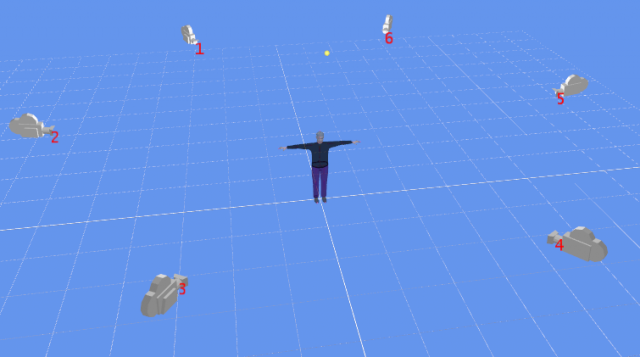 We’ll be covering a lot of the mocap sessions with a monthly diary, as well as some video of it once it begins!

Programming currently is in tandem with the animations above. Animations are key right now because after animation there is of course..sound design. Generally if you do all these items in the proper order production runs much smoother.

We’re also working out all the kinks and bugs in the animations as they are integrated into UE4, as well as creating what are known as “blueprints” in the UE4 engine. A super brilliant system that makes us absolutely love Epic Games, as it removes a lot of the painful C++ coding that previous versions of Unreal had.

We promise, this is probably the last art concept you’ll see about the Z1200-BA “Devastator” shot gun. We’re hoping to show a 3d model next time!

The photo below shows the new sights we have set up for the weapon, to give it a more advanced look. Within the story, some of the weapons by Kronos industries are prototypes. The shotgun is arguably the most advanced out of all of them. Below are the various color schemes we’re looking at in the final design of the Devastator. We’re aiming towards the aluminum or carbon look. Which do you prefer? 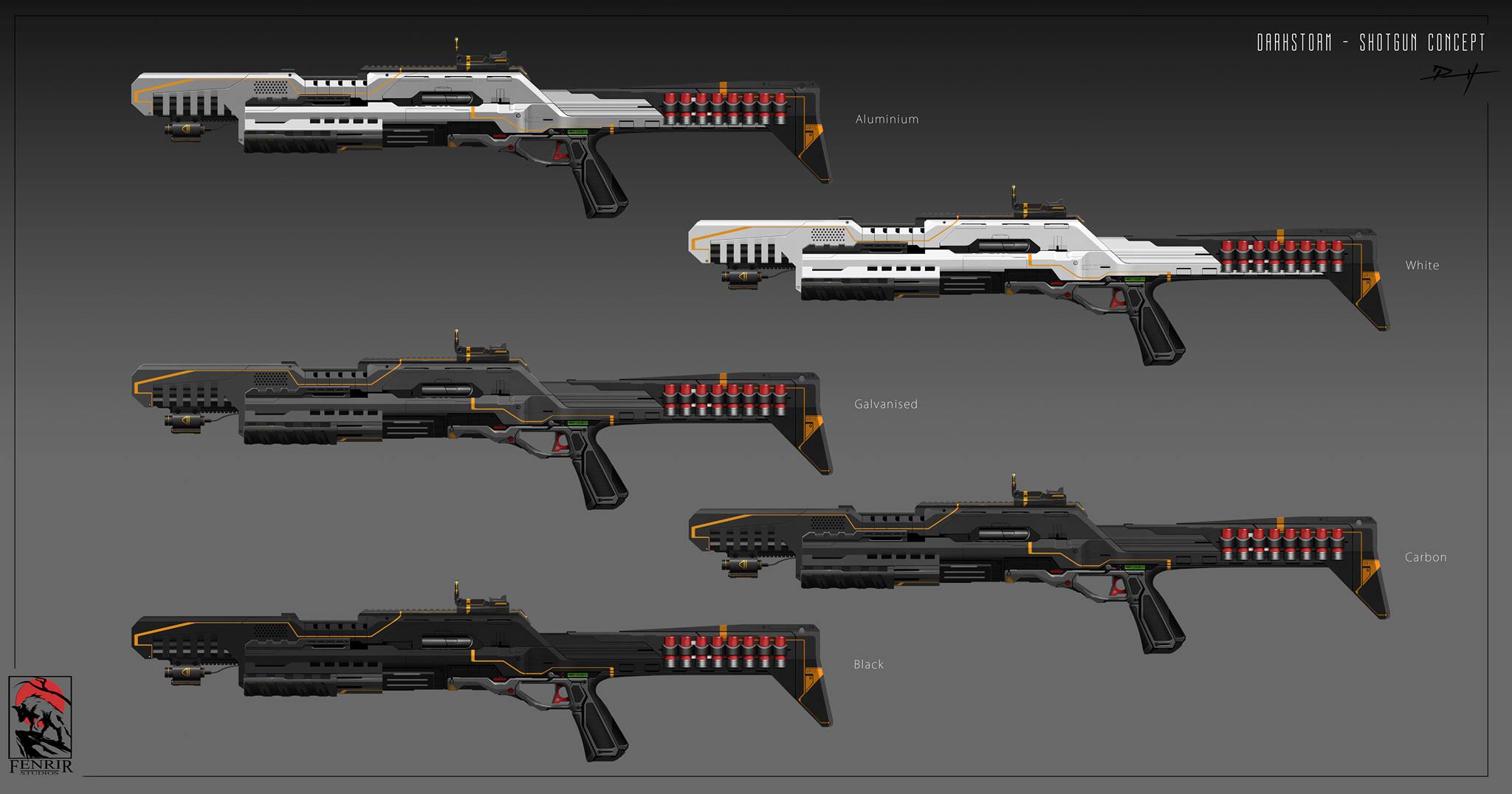 We meant to show this last week, but this is the sub-machine gun concept art. This is meant to be a fairly small weapon but with a lot of firepower. Like the pistol it has a lot of options when it comes to the attachments available.

Hmm..what name and model number should this one have? 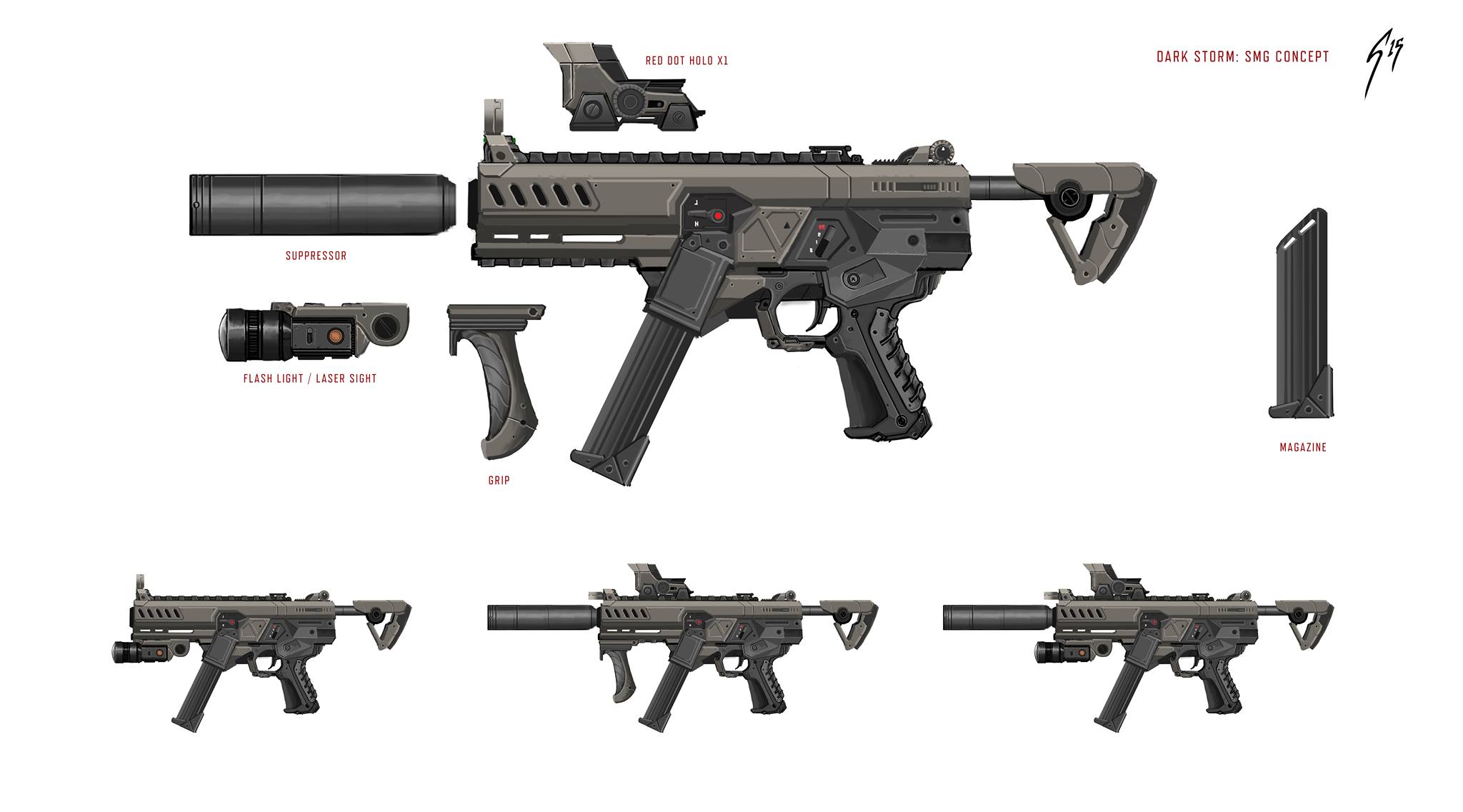 Recently we’ve been updating on mostly weapon models, but we’re getting into the stage of modeling other aspects of Dark Storm. Below is a current model of the officer you saw last week. This is still a work in progress.

That’s it for now, but in the next few weeks we’re hoping to show some more weapons, animations, models of main characters, and possibly some sound and music.

Keep an eye on our Twitter and Facebook as we’ll be starting our Twitch streaming sessions again, along with a Q&A with developers of Dark Storm on the current progress of the game.

Nice article. Keep it up!