This psx/playstation 1 styled game is deep into development. I have been working on 3D models for the fuse room. The room is complete and the only things that would be considered missing are misc items on shelves and that one nook in the corner. Each object was hand painted with texture overlays to give them the grit they need. From volumetric light textures to barrels ton the floor, to each item was handled with care. It has been an exciting time making this room come to life. Whats next?.....

In the last article we left off with that hallway. This time around I decided to finish an entire room, but first I would like to mention some small things I did for this room. To start, I made some window textures for thees offices. The idea is that the people inside them wanted to hide. Not only did they lock the doors but pasted newspapers haphazardly on the windows. You can see there are some holes here and there. And lastly I added thees drinking fountains. One is for a puzzle you will see once you actually play the demo (someday).

Moving on the the main attraction for this article, we have what I’m calling the fuse room. The room started its life as a top-down drawing on a pice of paper. After that I began construction on the room itself. Since I’m only using, at max, 256 x 256 textures (which are the biggest texture sizes of the PS1), I had to get creative with this one. A singe wall can be divided into two sections: the concrete wall and the tiled bottom. It took quite a bit of trial and error to get it right, but in the end I nailed the look.

Now that the room and walls were done, it was time for the ceiling and floor. The ceiling was easy enough, just poured concrete supported by rebar inside. The floor was the only real question, but I figured that big concrete slabs would work nicely. I textured them based on the floors in the computer repair warehouse I work in. Done.

Next was the platform leading up to the electrical equipment. I could have just made everything straight edges and not worry too much about the railings, but I decided that some wear and tear would give the platform some character. Next was the rails, and I thought it would be cool if it looked like there had been some sort of struggle, which would explain the damage to the concrete platform. Perhaps someone was slammed really hard against it, or someone threw an oil drum REALLY hard? Either way, the end result looks nice. 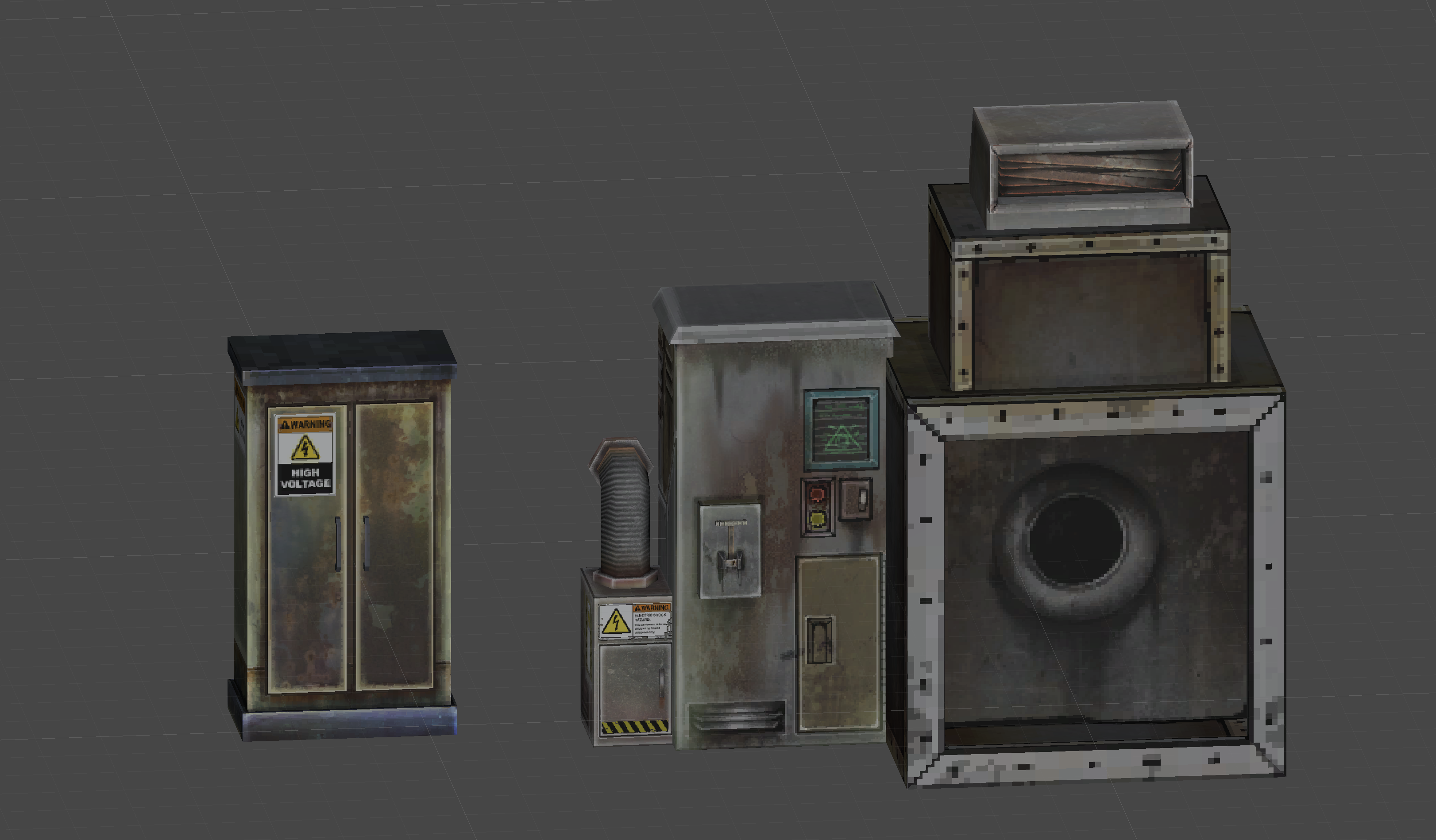 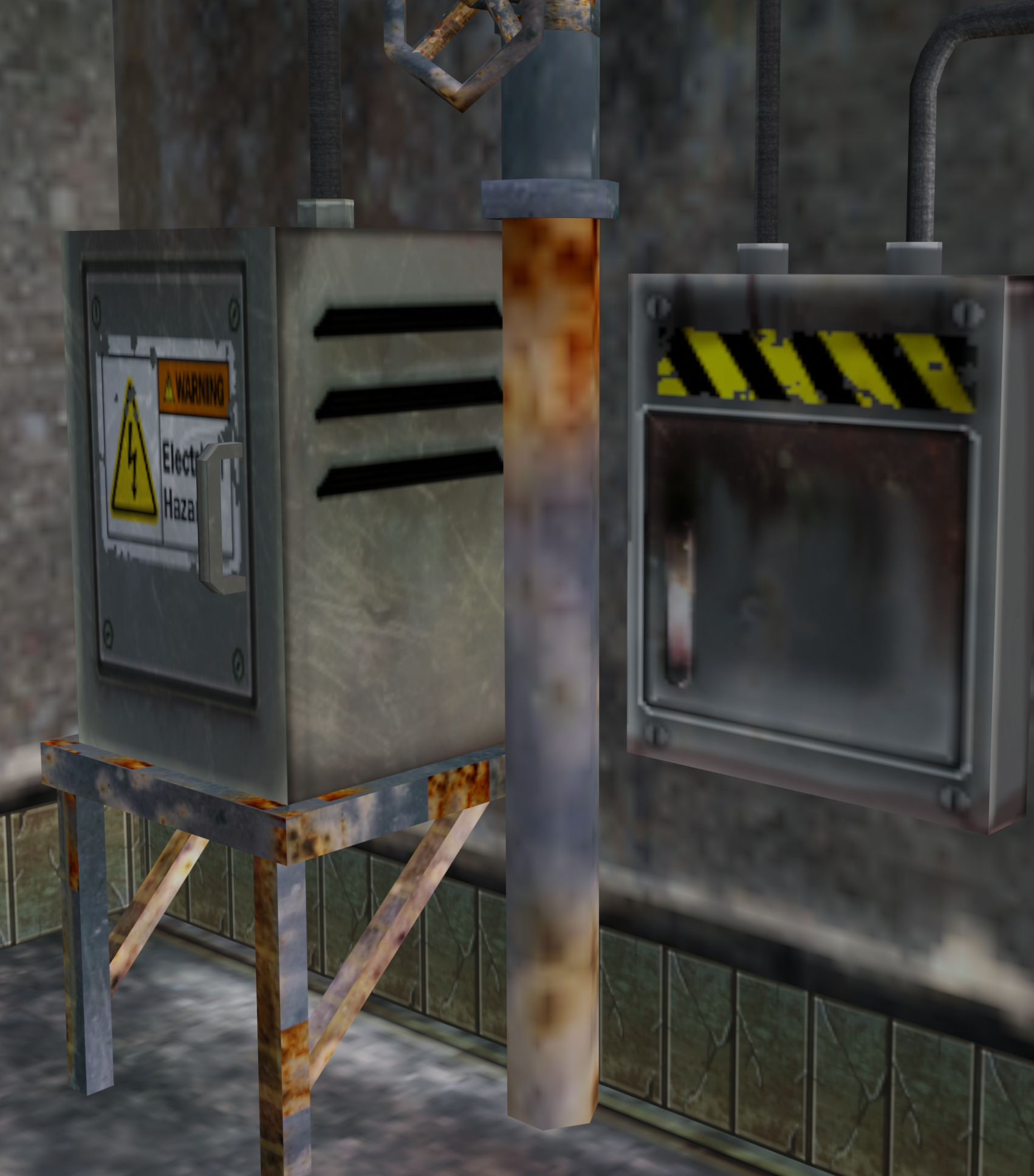 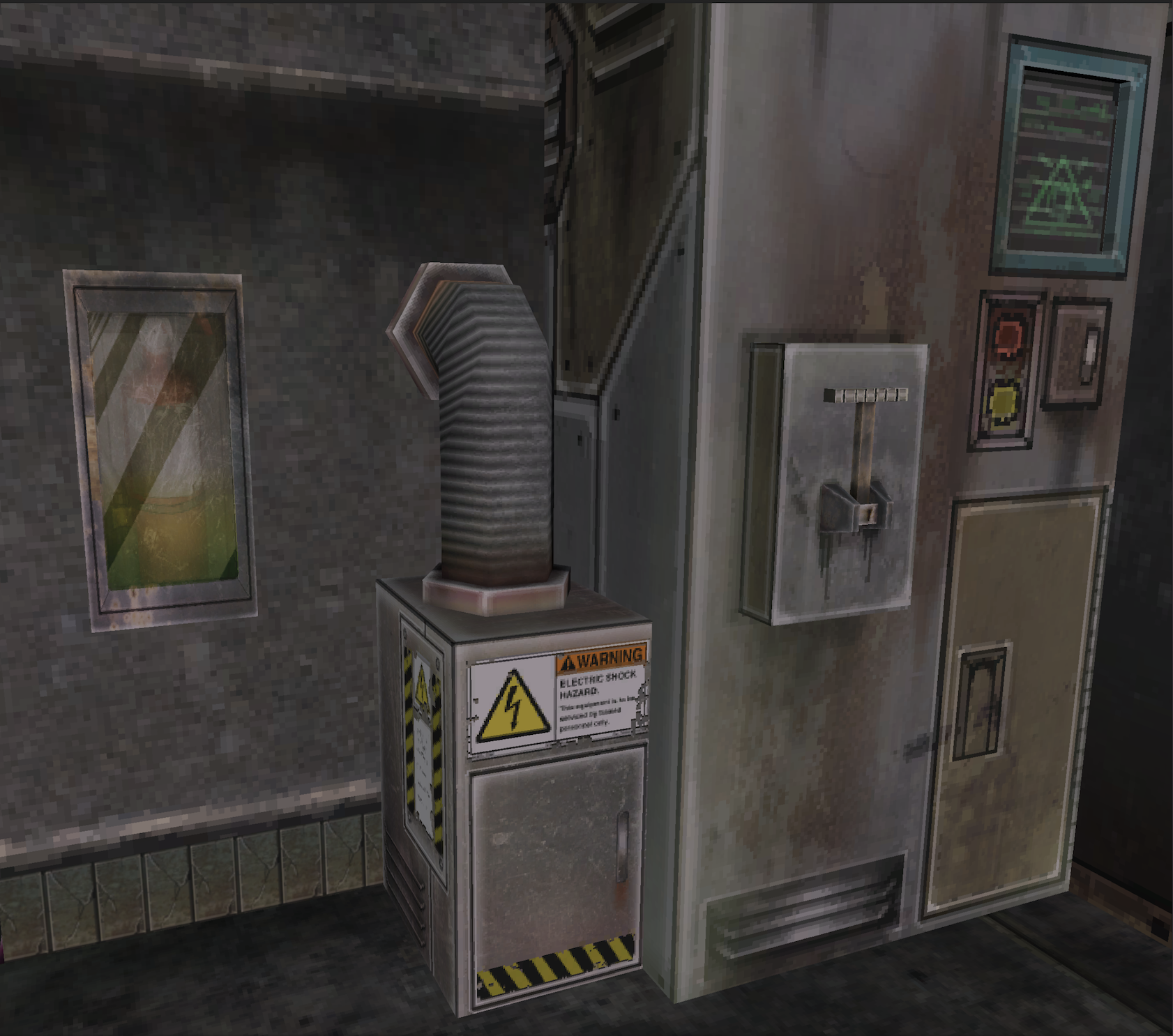 Next we will move on to the little nook in the back. I wanted this area to house another character, a side character, of sorts. A person the player could talk to and interact with to get some interesting goodies and lore, if you can get to him. The gate is locked, and he won’t ever open it. For now, the room will remain empty, and the lock untextured. Just remember to stop by once the demo is released to say hi! 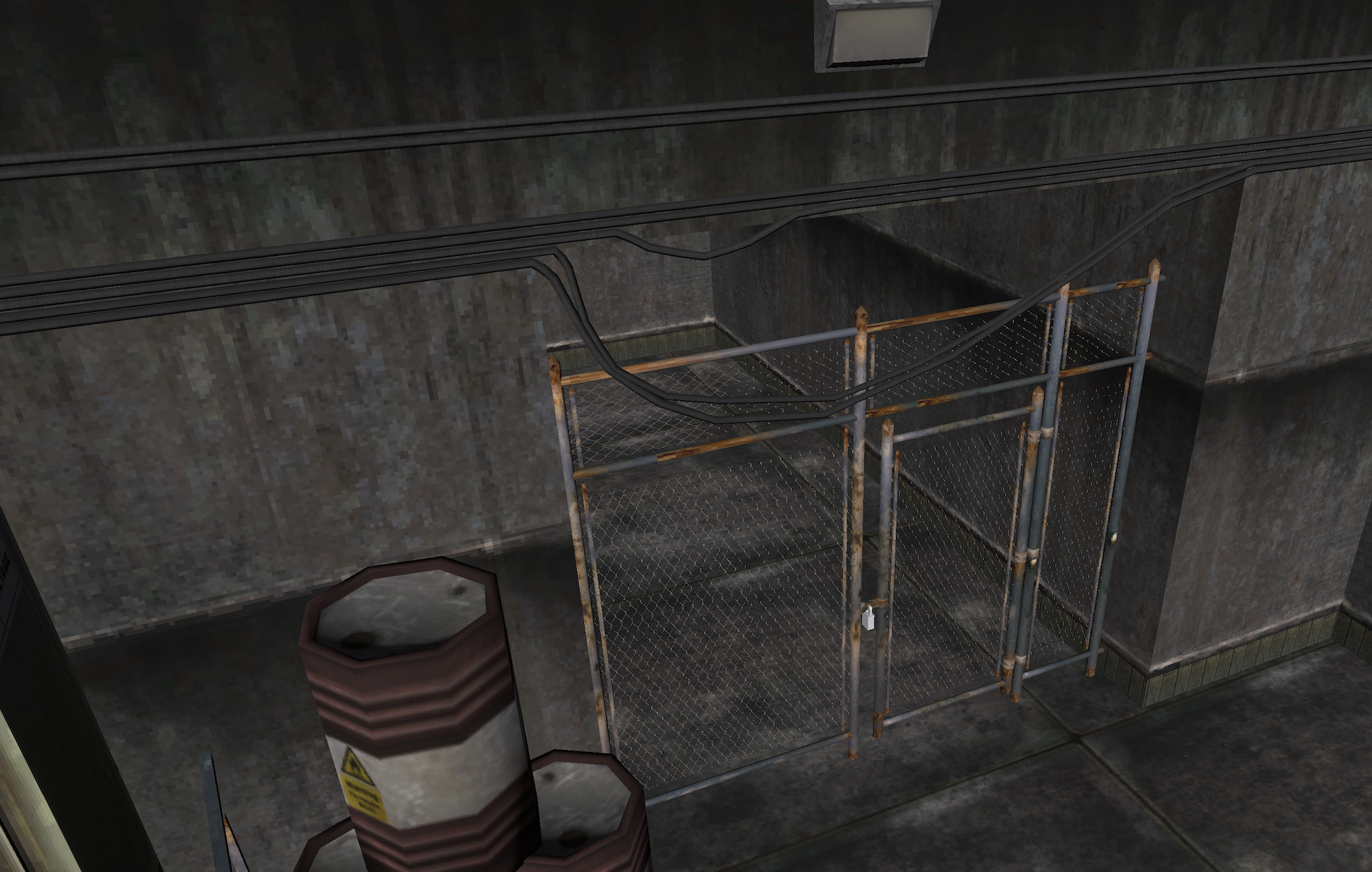 Lastly we have every single level object in the scene. I had fun with these little things. Every object you see was hand-painted in some way. The process had me texturing in Clip Paint and then exporting them to Blender to paint the final details. The end result speaks for itself. Looking back I will need to put labels on the object so the player will know what they are, mostly the air controls and the fuse box. The air controls were an interesting one. Since it was so big, I used a total of 5 textures to get the look I wanted. I’m still debating the final look of the big fan thing. I will need to go back and do some touch ups, I think. 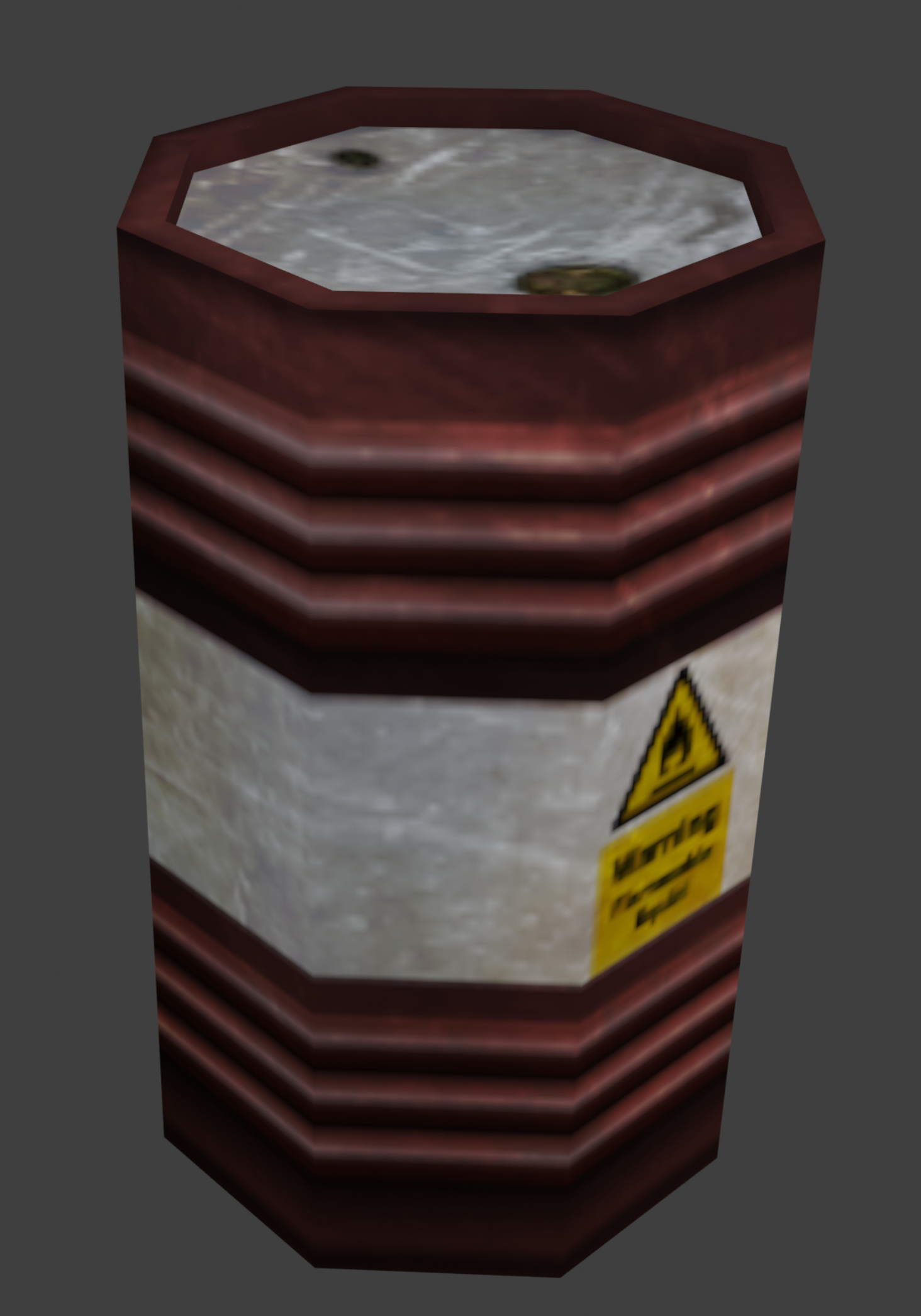 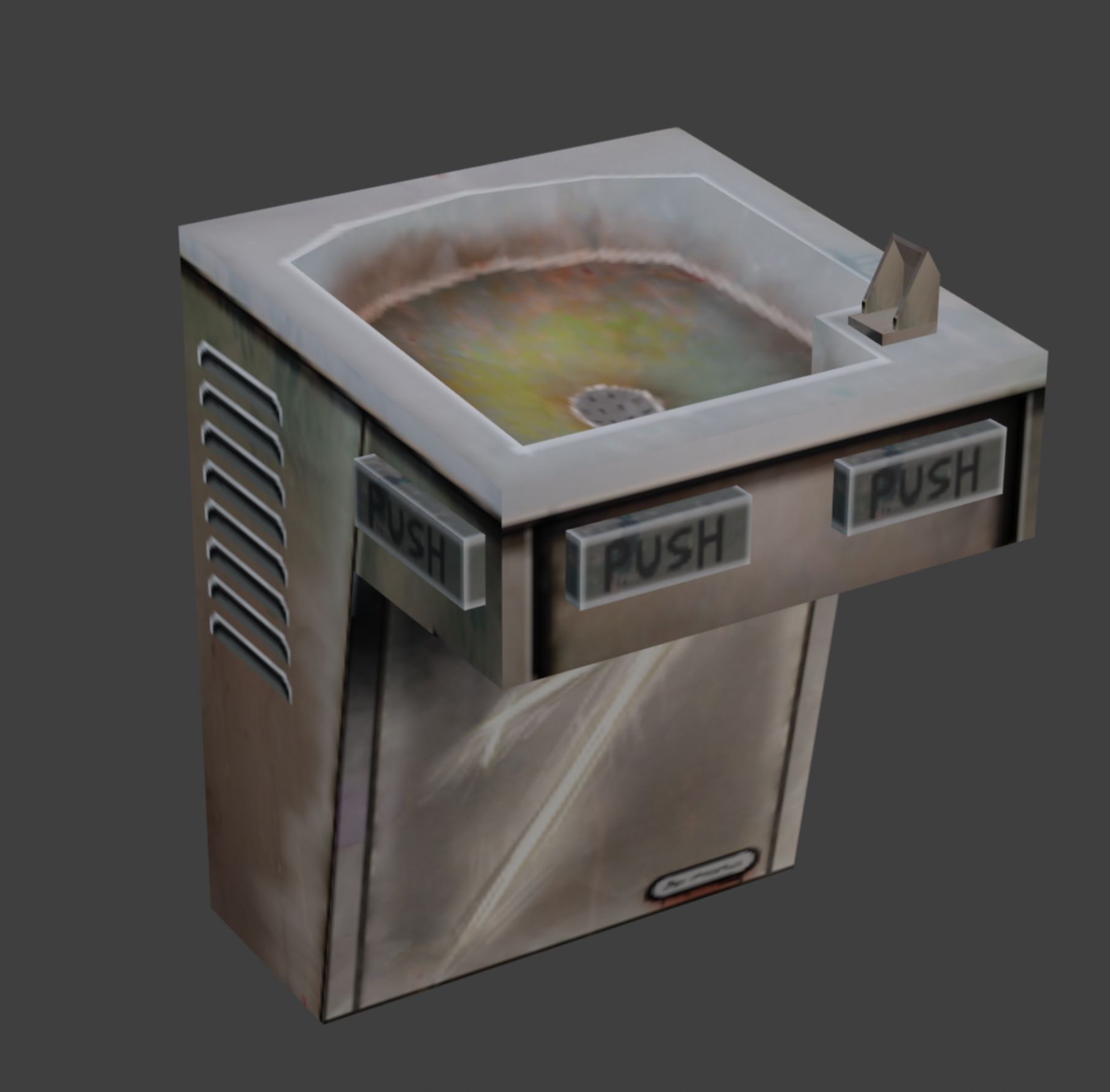 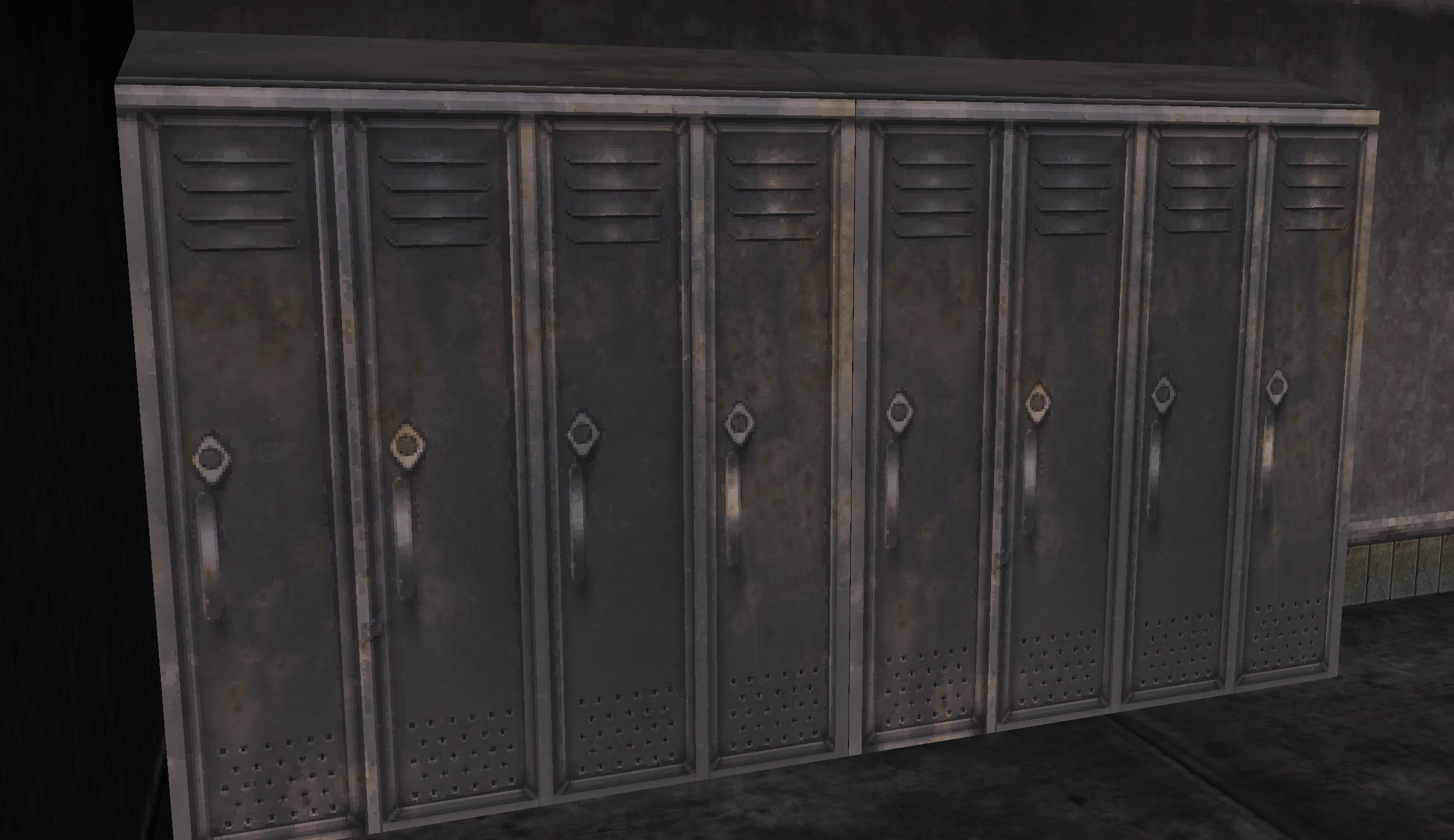 The fuse box uses a total of 3 textures. The cables on the wall all use one map and are surprisingly easy to make. Last were the lights, with two different textures for the light box itself: one with the light on and the other with the light off. It’s done much like the other lights I did in previous articles. Now, the light cone was pretty interesting. I had never made something like this before, but after thinking it through, it was very straight forward. 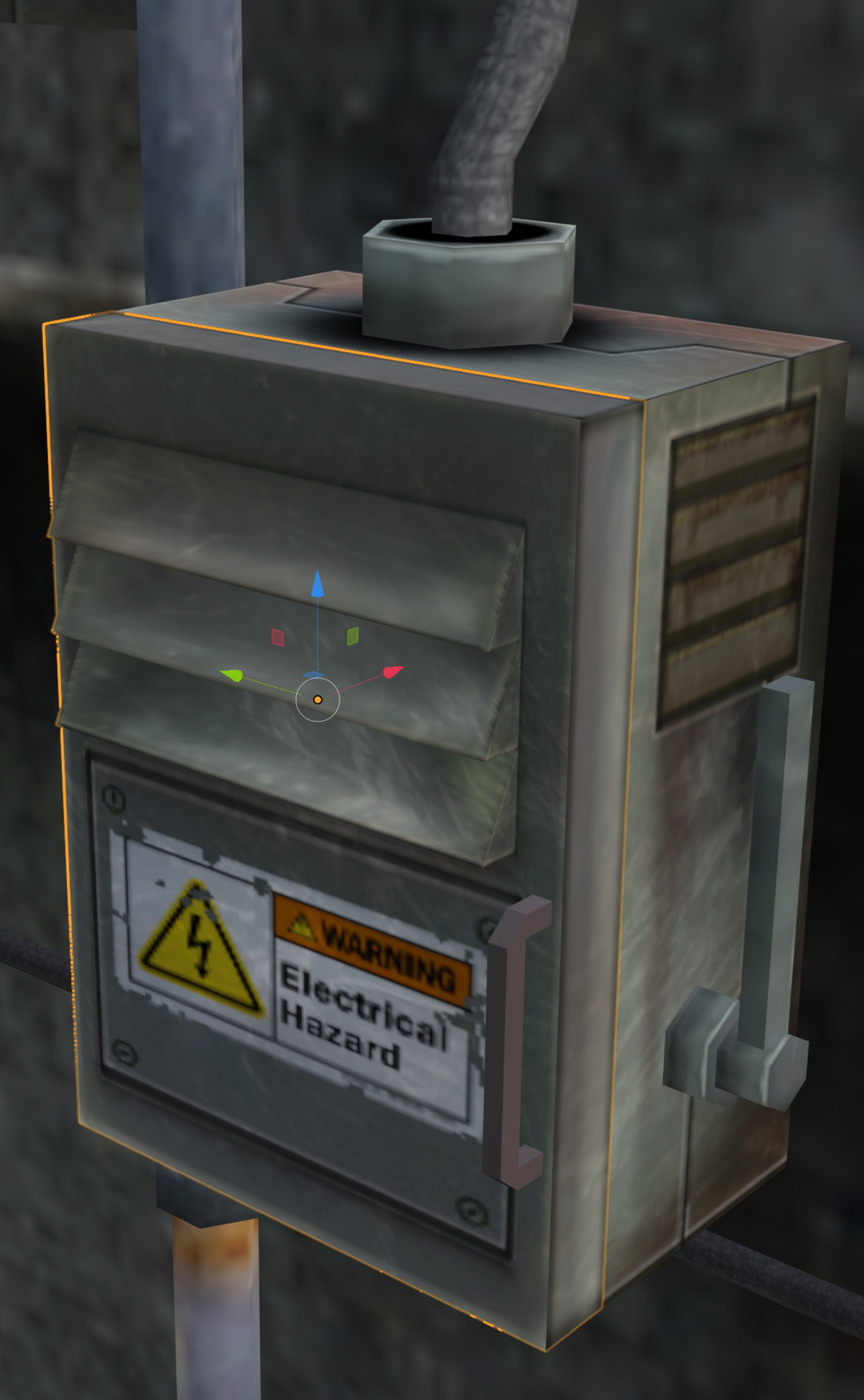 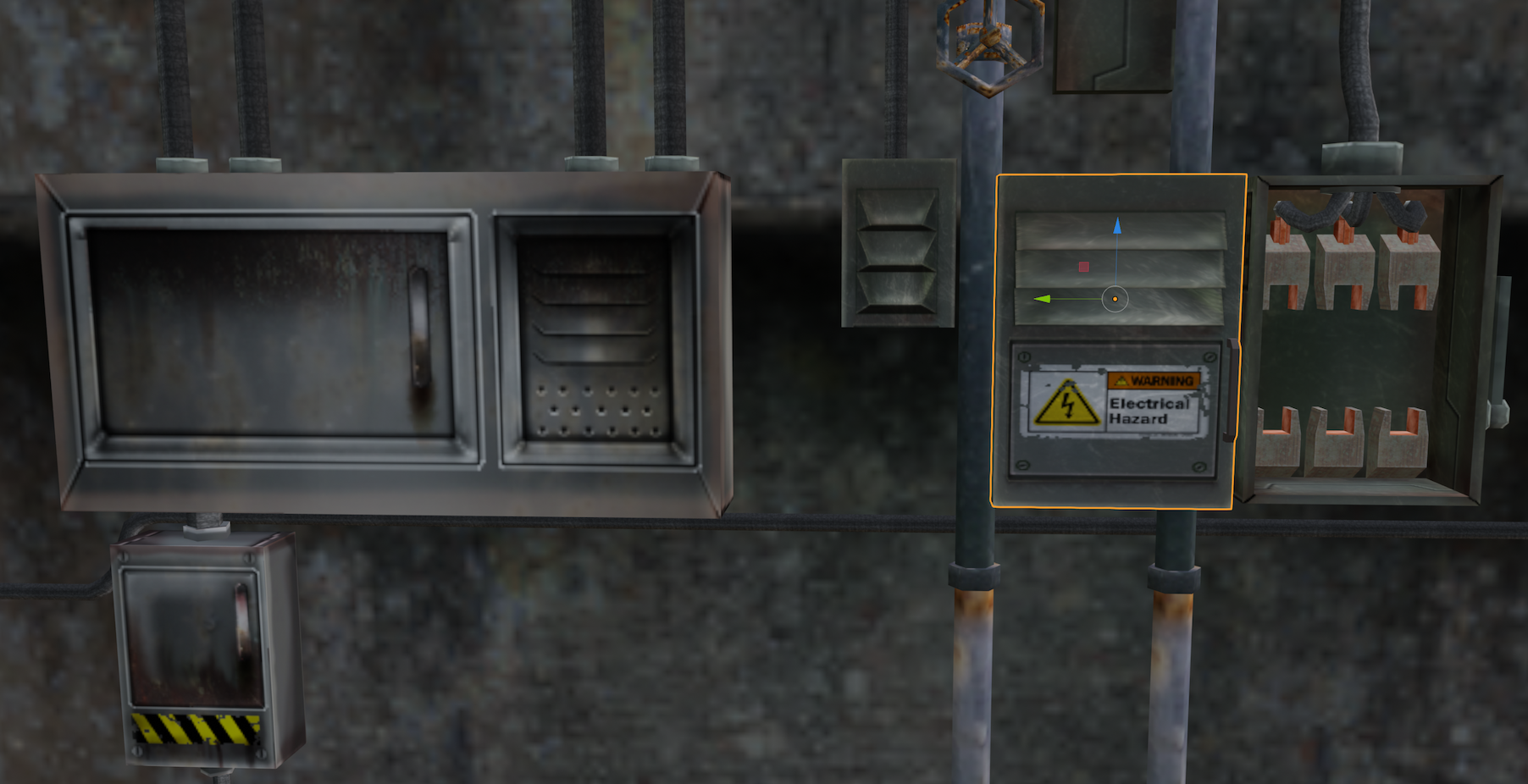 Put everything together and we have ourselves a very nice looking electrical room with some stairs leading down to parts unknown. What’s down there? Well, perhaps once the demo is released, you can know. Until then, thank you so much for reading! 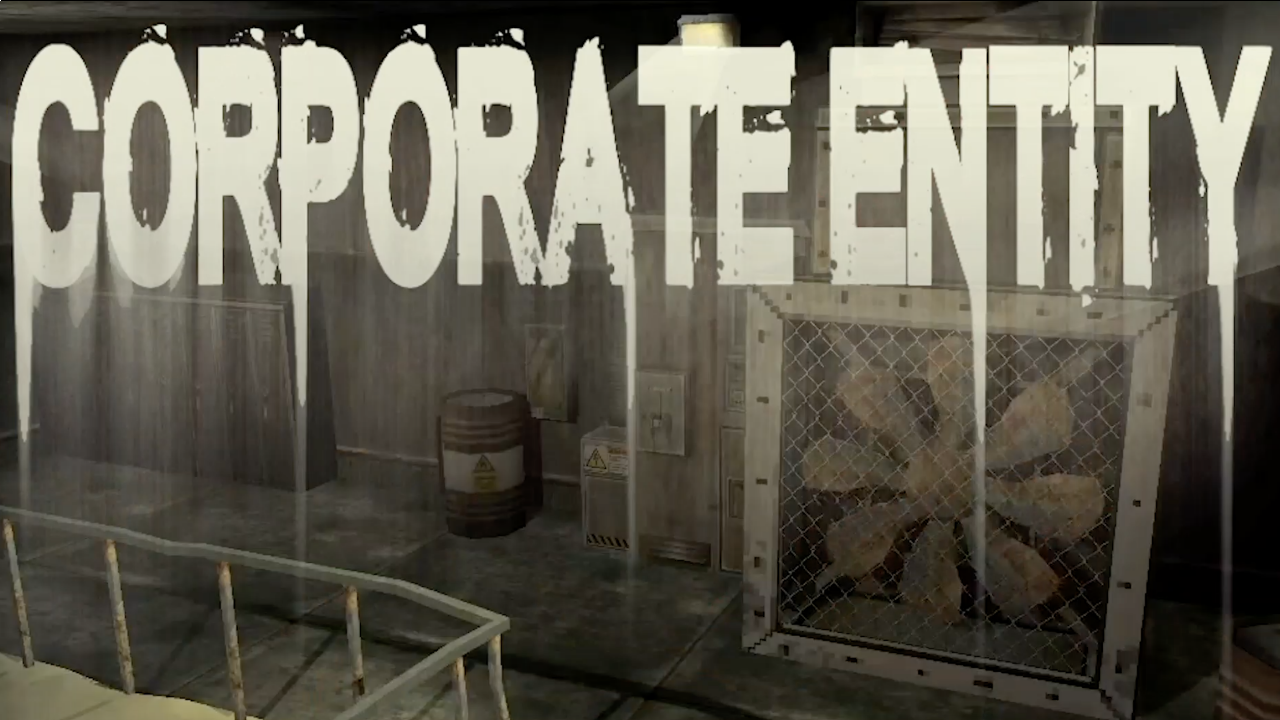 Links to my social media are down below, if you are interested in even more of my thoughts and art.

If you want to support me in a more direct way, you can donate to my SubscribeStar, either a one time donation or on the regular, if you like. Subscribestar.com

I don’t know when the demo will be released. I’m still working two jobs, so dev time has lessened a bit, but every day is still a dev day. Have a great day, everyone!