A big URRpdate on speech systems and dialect generation!

Posted by UltimaRatioRegum on Jun 21st, 2016

I’m pleased to report a nice big (if two-day delayed) URRpdate this week! Lots of progress has been made in the last fortnight, and now we can scroll through all the standard options for each conversation options, with an appropriate pairing of colours to denote whether you know how to say it in the dialect you’re currently speaking (if you don’t and you select that option, it will say it in your home dialect, thereby “giving you away” somewhat if you pretending to belong to a different culture); and in the future I might add a language layer as well, assuming I come up with a good mechanic for language-learning and language-based gameplay.

So, firstly, here’s now the conversation menu looks now, with and without a scroll bar. I’m still finishing off the coding on the scroll bar as these things are really just remarkably awkward and difficult to program in well, especially when you have options that can take up multiple lines and change size, and be sorted into windows of different sizes depending on the player’s selected options. Nevertheless, screenshots/gifs:

These are all, of course, only the default options, as the system for implementing extra questions is not yet in place, but will be soon! So as you can see, we’re going for a two-part colour coding here: green and white means that you’ve got the knowledge to say that in the chosen dialect (obviously you can say everything perfectly in your home dialect, otherwise you’d be in serious trouble!), red and grey means you haven’t. For looking at dialects, the currently-selected dialect shows up with a blue diamond and all the other dialects you know anything of have a red ‘X’. When you’re in the “Challenge” and “Smithing” options and the other options that have two windows, selected/rejected options will be displayed the same way; when you’re trading, which has three windows (your trade goods, selected trade, their trade goods), the items in the middle window will have a < or > arrow next to them showing which person of the two trading parties (i.e. you and the person you’re talking to) they came from.

Now, some techy stuff. When the world is generated, the game now has an (in the process of being written) list of every possible question archetype. There will probably be somewhere between one and two hundred default questions, at a guess, and finishing these off is one of my tasks for the coming week. As for questions that are generated? Well, every question of the sort “What do you think of [work of art]?” will simply be a variation of a default “What do you think of a specific work of art?” question, and once that question is learned the player will be able to ask about any work of art. Those meta-level questions are not present in this initial list, since one would never ask “What do you think of a specific work of art?” without stating the work of art in question, but they are also stored, albeit in separate lists. I am still calculating exactly what the best way to store the player’s dialect knowledge of these meta-questions, but I expect we’ll have a large list of meta-level questions – since there aren’t that many (ask about an artwork, a city, a town, a book, a poem, etc) I think they should be stored fine in their own list. 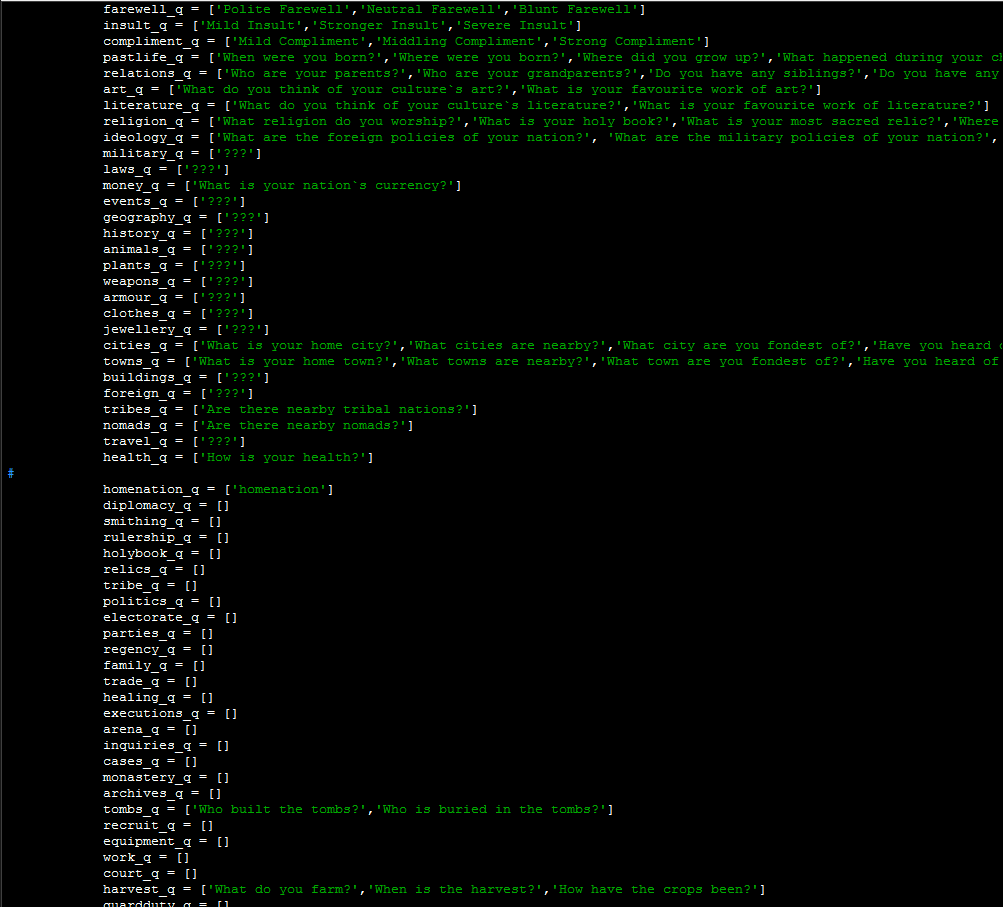 You’ll note a “gap” between the top and bottom lists; the bottom list is for question topics that only show up when you talk to particular classes of NPC, whereas the top lists apply to everyone. Of the two special instances shown in the above picture, for instance, the “tombs” questions apply to priests and archivists in cathedrals, whilst the “harvest” questions (as you might expect) apply to farmers. In turn, each question in each category has a list added onto the end of it, which contains a set of numbers, relating to which dialects the player does/doesn’t know how to ask that particular question in. This system obviously requires me to type out all the standard question forms – which I’d have to do anyway, regardless of system! – but works very rapidly in the speech system when listing possible statements and whether they can be said in a particular dialect. Upon a particular sentence being selected, the game will then translate the overall question into a specific question for that dialect – so “Who built the tombs?” might become “By the efforts of what craftspeople were these tombs carved?”, or “What people created these great crypts?”, or “Under what ruler were this tombs mined out?”… and so forth, and the same then obviously applies to every possible question, including the generated ones. As well as finishing all the question lists, the other goals for this week are ensuring the scroll bars work correctly, storing the meta-questions, properly allowing the player to switch dialect, and allowing the player to start typing something and then have the list of potential questions adjust themselves based on the “search” – as we discussed before, this is going to be *vital* for some of the really long question lists.

I look forward to seeing how you implement the language learning mechanics. Are there going to be specific teacher NPCs, or will the player be able to learn from any bilingual NPC? Will there be textbooks?

Thanks! I think the answer is probably "yes" to all of those!

maybe would be something like millenaire mod on minecraft, where you learn the language as you interacts with the civilization (or at least this can be the free/cheap (but slow) way to learn it :D