This time Alejandro took charge of new post and prepared for you some insight into his designing process.

My name is Alejandro Machado and I'm this project's concept artist. So I'm going to be in charge of designing all the different species that populate Twinsun, the main characters, the clothing, the devices, the buildings... Well mostly everything.

And this leads to the question: What are we supposed to do in this game? As we all remember, the designs in original Relentless are quite awesome. They're cute and endearing and we all love them.

But it's also true that they're designs from the very beginnings of the polygon era. That's more than 20 years ago and many things have changed. We're not longer limited by the graphics and aesthetics in games have evolved over years. And we mustn't forget that this project has become more and more ambitious since it's beginnings. In conclusion, my main function here is to develop a graphical update for the entire LBA universe.

On today's post I'm going to talk about Funfrocks army and their concept evolution so far.

These are the enemies you step into at the mere beginning of the game. They're the clumsy yet dangerous Funfrock's minions that crowd every single crossroad and critical path.

They posed quite a challenge on the go, because they must look goofy but still suppose a threat on Twinsen's life: even when they're the easiest enemy, if you make a mistake they can take you down within seconds with their rifles and grenades.

Originally the idea was to make a heavy redesign of them, taking out the goofyness and going for a dark and threatening aspect. 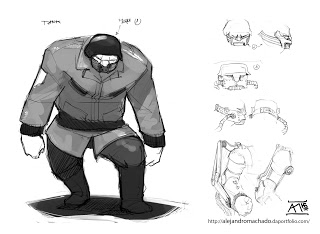 This idea didn't advance too far anyways. If we consider the other clones, the more dangerous ones (rabbibunnies, spheros and grobos), then this design would outpass them. Besides, the entire idea for the game would go too far into the wrong direction.

So we decide to go back to the roots and look the original game for an inspiration. This time I decided to emulate the overall shape of the original ones, but adding some threatening aspects. In this case, the arms would be bigger and stronger, and the uniform more complex, full of weapons. 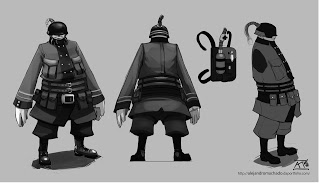 This mysterious guys will be an addition to the game. Their function will remain secret for now, but we can take a glance at their overall aspect.

On my original approaches, I imagined this guys full covered in clothes with this big disturbing eyes who stare at you, making you nervous at anytime. 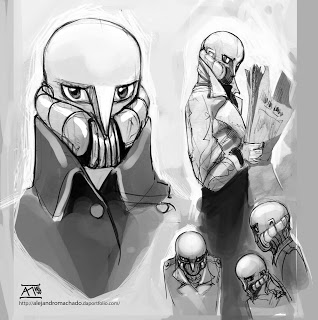 Even when we kinda like this idea, the main problem with it is that their intention was to clear. You know they're interested in you because they're looking at you.

So, after some trial and error I finally come up with this new design where their eyes are covered with the mask. So they can make you think they're at their own business while they don't lose any detail of you, with their microphones and other special devices. 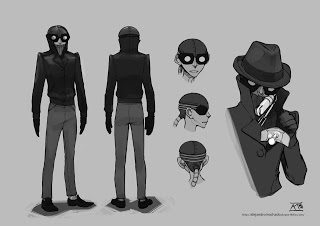 This is such an underrated part of moddb! awsome work!

Thanks we try our best :)

I love the idea of adding more different enemies! And they also look very cool, keep going it's looking awesome.