Well it has been a while, here we'll detail a whole bunch of new, improved and changed stuff. Including new animations, controls and even a full graphics overhaul!

It's been a while, but that just means there's quite a lot to go over. So, sit back grab a coffee and relax...

First up, we've had another couple of our main characters redesigned by our favourite artist Luigi Lucarelli! Done in the same style as our titular duo, we see both our evil villain Dr Daucus, and Clive's time-machine-creating cousin Prof' Nancy Merricarp! Our cast is really starting to take shape! 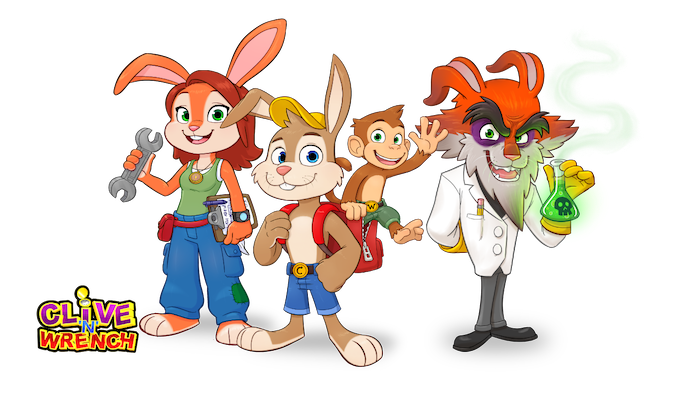 Next up, art. For a while now, I've been wrestling with exactly how to make the games art work. Up until recently things were pretty lackluster, but then our recent character overhaul and the inclusion of dynamic fur happened; this gave me the kick I needed to overhaul the in-game art and match it up to the characters and the style I'm aiming for. As such we've now settled on a much cleaner detailed looking set of environments; aiming more for a good PS2 style aesthetic as opposed to the PS1/N64 style we've had previously. This has resulted in a much more appealing and interesting set of environments to traverse. 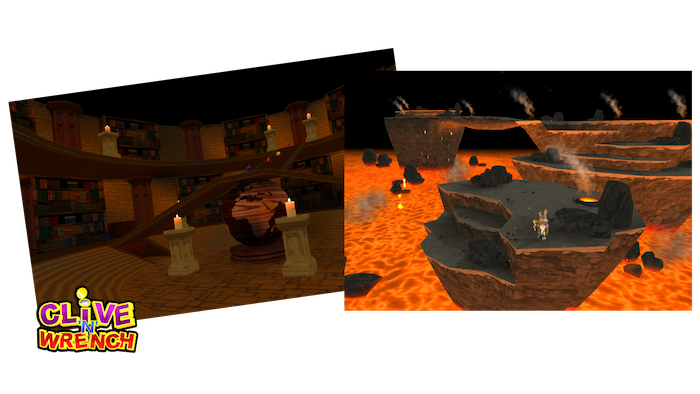 The last big thing today is Clive and Wrench's moves, and by extension their animations. Our dynamic duo can now double jump! Yes indeed, gone is the need for the glitchy ledge grabbing, and in comes a new more acrobatic and fluid feeling double jump. Moves can be mixed too, you can double jump into a glide, jump once, glide, and then jump again... heck you can even jump, belly flop, jump and then glide! In order for these new features to work well, it is important that our animation is up to scratch! There are now thousands of extra frames of animation, created in such a way that moves blend together as seamlessly as possible. All of these things are really moving Clive 'N' Wrench beyond what I could have imagined when starting the project all those years ago!

And that about wraps it up for today, one last thing before I go is a video showcasing most of the points covered above!

As always, thank you for the continued support!
Rob

Greate improvement on graphics, and Luigi is a create designer too !
Your 3D work has a new style better than before !

Love that N64 feel in overall design - looking foward to this one!

N64 style on the return! about freaking time.