I'm happy to say Project Chaotic's team is expanding! We're becoming a small dedicated team, and while myself and Warstep volley back and forth ideas and tests, we've updated the image gallery with his work on the Warrior's Patriarch.

I'm going to take this moment to explain a bit more in detail the motivations behind this project. Chaotic is largely an experiment. There is a wealth of game design ideas which we know work in the industry. However, there is a great deal of bad behavior as well. This bad behavior carries over from Literature and the Film Industry. Instead of creating elaborate character narratives players will experience, I want to create an elaborate world, with resources, impactful geography and important necessities.

The RTS genre is a perfect medium for exploring this world building, since it is naturally about resource allocation and expansion. However, we're also motivating players to explore and understand the world. In multiplayer, this has little effect on your characters, but the depth of our alignment system offers interesting tactics for positioning. Going forward, the central theme that keeps coming up in talks, is about how important geography is. From a gameplay perspective, it determines how fast your army can move, and how powerful they are when they go up against enemies. Chaotic is an origin story, and as such the geography, and what players do with it in immensely important.

As a base, we're exploring default tribes, factions, and character designs by designating particular resources to key geographical areas, and the factions work within the manner of their resources. For example, the Warrior's Patriarch is a faction of powerful warriors, who have a wealth of access to tough beasts. They train with the beasts, use them as food, and use them in their armors. They have limited access to ores for metals, but they make the most of it. The Warrior's are the tough-men of the world. 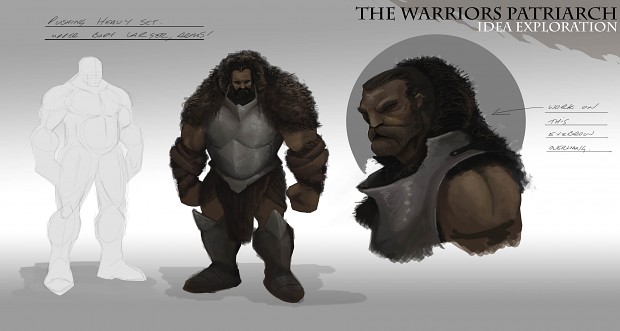 It is important to note, that Chaotic's alignment system is a little different that the standard Good/Evil, Chaos/Neutral/Lawful system. Not all races and factions yield this moral and ethical system. Instead, alignments are based on personal and geographical identifications. There are 5 base types, and each represent multiple types of archetypes. Any combination of the 5 is possible, making a total of 25 alignment types. Duplicate combinations (example Chaotic-Chaotic) , are labeled simply as the prime type. The alignments are Corrupt, Chaotic, Neutral, Lawful and Ethereal. The gameplay purpose of the alignment system, is an evolving meta-game style Resistance system. Instead of static physical/magic resists, alignments evolve with geography and characters.

On the programming side, I've been creating the proof-of-concept in Unity, but have never meant for the final product to be in the Unity engine. I've been exploring UDK as well as other options as we keep moving the project forward.

More on specifics of the Chaotic universe soon.

Just a minor nitpick, but shouldn't it be "The Warrior's Patriarchy"? "Patriarch" would be a person's title, IIRC, not a group name.

This is definitely looking interesting. I have to say that I'm somewhat surprised at the number of Ogre Battle-inspired games I've seen in development lately... years without any, then two that I've seen in the same year. Not that I'm complaining, as both look really great, appearing to be taking their own interesting twists on the OB formula, and I would absolutely *love* to have more games in the vein of Ogre Battle (especially with the prospect of multiplayer).