A look into how we're revamping the look of our main character.

We noticed during play testing that a lot of the time is spent looking at the side and 3/4 back view of Cecil's head. Cecil's head shape is kind of boxy and this view needed some more visual interest. When we went back and looked at the original concept (below), we noticed some missing details (like the mutton chops and ears) that would help improve his 3D silhouette. 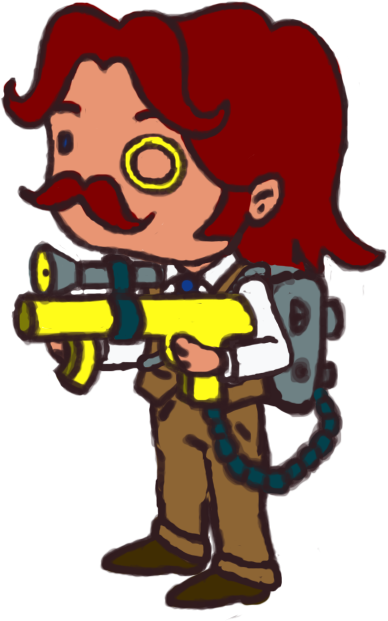 We wanted to quickly see see what the new Cecil would look like before going through the whole rigging and weighting pipeline so Cathy modeled a new head and then pasted it on the old animated mesh (which is why you see a gap on his neckline). Here's the new version with mutton chops, ears, bigger mustache and bangs and a new hair style (mostly around the sides and back).

And here's the current character for comparison:

This change also allows us to simplify the mesh - the current character has 4 different facial expressions (default, happy, surprised, angry) which are individual meshes that are weighted to the skinned mesh. The idea was that we would change his expression based on what he was doing in the game by showing/hiding the different faces. But since his facial features (eyes and eyelids) are rather small and his mouth is mostly hidden by his excellent mustache, the different faces didn't read well so we decided to cut the face swapping.

Usually we wouldn't make such a risky change to our main character at this stage of development but we feel like the improvements to the character's silhouette and overall simplification of the mesh outweighs the risks. What do you think of the new vs. current Cecil?

Thanks, we weren't exactly going for dignified, but we'll take it! I think the bigger mustache and bangs make him look younger somehow.