Hello all. Apologies for the lack of news this week, I've been a bit busy with all sorts of things. But I have still be working on the next patch with some new content and a load of bug fixes/ gameplay tweaks. So, on with the news.

So, one of the things I have been working on is working on the design of the second dungeon level. Currently, it looks a but like this: 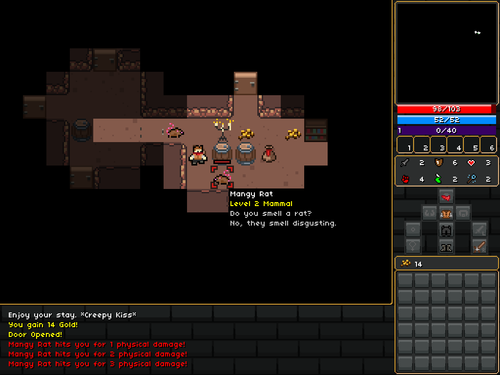 Of course, this is currently just a re-skin of level 1, so this will not be the layout, and there is a distinct lack of rocks, holes, and water. But it's the first step towards the next level.

And now for a quick overview of what is happening in patch 1.0.5 next week:

And that's a quick tour of the next patch.
~TheIndieForge

i really love this game too. its a bit difficult it seems but i like it. maybe some sort of crafting log or tutorial is needed

Thanks! I will have a tutorial ready as soon as the main features of the game are completely finished, otherwise the tutorial would have to be changed almost every patch.
~TheIndieForge

are you planing on adding a class system? (Thief, Archer, Mage, Warrior, stuff like that?)

No, every player has access to the same skills, armour, and weapons, so you choose your class as you play. That way your play style can adapt throughout your game.
~TheIndieForge