We are on the home stretch to a huge milestone in the development of Cattle and Crops. 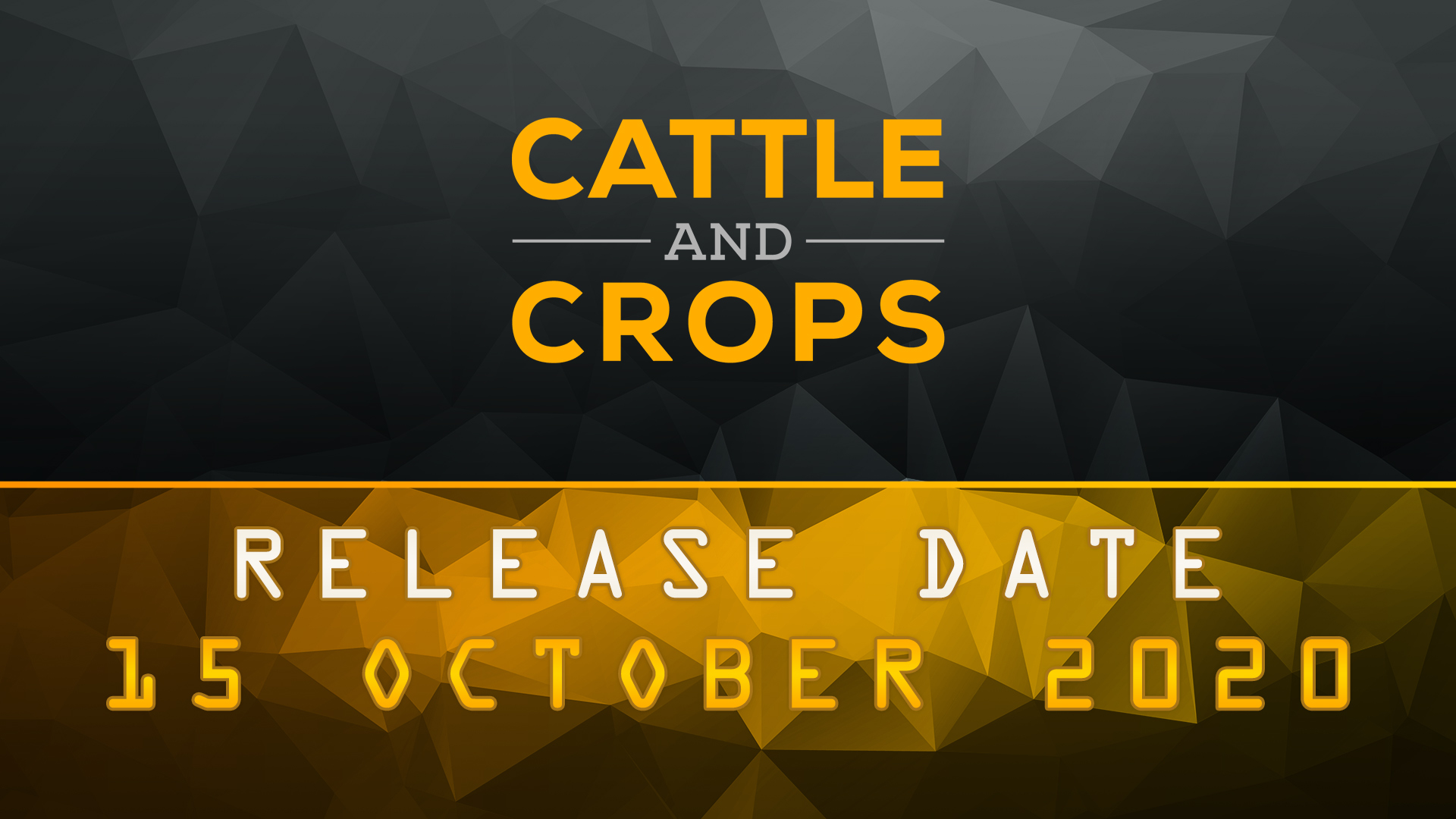 We are on the home stretch to a huge milestone in the development of Cattle and Crops. On Oct 15 2020, version 1.0, which we all have been waiting for, will be released. This is an exciting moment for all those who have supported the game, some of them for years, because it will turn the crazy idea of creating a professional simulation as close to reality as possible — from the community of fans of agricultural games — into a tangible reality.

We now also have a clear picture of what will be included in V1 at the start and what unfortunately will not make it into the game by then. Of course, this is the question that is of great interest to you as supporters of the development, some of whom have been with us for several years. And that's why it's also important for us to openly discuss with you the goals that have been achieved, but above all those that have not yet been achieved.

Many of you have already supported us in the context of our Kickstarter campaign in 2016 and with this leap of faith you have contributed significantly to the financing of the project. In the course of the campaign, we have also described our goals regarding the content of V1. Without a doubt, these goals were also the impulse for you to support the project. Therefore it is even more difficult for us to inform you at this point that we are not yet able to deliver the following content planned for the start:

Multiplayer: In the Kickstarter campaign we included the multiplayer. We had already informed you in a statement on December 5th, 2019, that it will not be released for V1, because we have to concentrate on the work on the AI drivers first.

Stretch Goal 1: Multi Language (French, Italian, Polish, Russian, Spanish) is for the time being available in a basic version and has been extended to the new tutorials and scenarios. Other languages (Czech, Danish, Dutch) are not yet implemented. The missing languages as well as a revised version of the current languages will follow after V1 or will be completely translated.

Stretch Goal 2: "The Golden Voice" (voiceoOvers for English, German and French) unfortunately won't make it into V1. Due to the extensive new content in tutorials and scenarios we have to do the basic translation first.

Content: There will be no more maps or machines beyond the machines already delivered with the fieldwork package (v0.9.6) for the release. We are aware of the fact that you would have wished for "nicer" news especially concerning this aspect. But the extremely time-consuming creation and "ingaming" of new assets had to be put on hold in favor of working on enhanced gameplay content. So we are all the more thankful for the already many great machines that have been created from the community and are available at modhoster. Of course we know that these are no replacement for other machines we have created. But at least these mods will hopefully keep you busy for a while.

Exclusive Backers Tractor: To all of you whose Kickstarter package includes an exclusive one - we didn't forget you, of course! Unfortunately, because of the time-consuming creation the same applies here as already written above (content). We will hand you the tractor!

Launcher: With the release we will discontinue the launcher version of Cattle and Crops. The effort to manage and support multiple download platforms will be too much work — at the latest with the release of the console versions — and therefore we decided to end the launcher support with this release. For all those who are still using the Launcher, you have the possibility to generate a Steamkey in your Cattle and Crops account and activate it at Steam.

We understand that many of you may be disappointed about this. As you know, Cattle and Crops is our first project. To the best of our knowledge and conviction, we have set the goals described there as part of the Kickstarter campaign. With today's knowledge, we have to admit that in many places we underestimated the effort and overestimated the speed with which we can handle the numerous extensive tasks. It is a fact that the high and detailed level of reality that we want to present in the game, initially seemingly manageable tasks can quickly become very complex. But it is not an option for us to simply lower our demands on realism in favor of significantly faster results. We are convinced that this is the reason why you support Cattle and Crops. And that's why we emphasize that the goals we have set for ourselves will remain the same. Even if they are not yet implemented for V1, we will pursue them in the continuous development of Cattle and Crops, and of course you won't have to pay extra for any of the kickstarter goals later on. Please understand, however, that we cannot yet give any concrete dates.

But why are we launching the V1 "now" and not waiting until all the goals are implemented? This decision was not easy for us and is the result of conscientious consideration of all the "pros and cons". Of course, the version we are about to release is not the version we planned to release in 2016 as V1. But in fact it is true that not only one-sided features are missing. On the contrary, in many places we were able to surpass our goals and bring in additional extensive and valuable content that was not even on the schedule. We are now at the point where we believe we can release a game that will give you and many new players a great, motivating and educational gaming experience. In the last few months we have put together a package with a lot of new content that will be available for everyone when the game is released.

In the following, we will give you an overview of the features that are already included and go beyond the Kickstarter goals:

Drying system: We have added a complex weather-dependent drying system to the grassland area, which reacts to influences such as temperature, wind and sunshine hours!

Bale physics and handling: When handling hay bales, we have significantly enhanced the physical handling by adding appropriate weights and the possibility of collecting via front loader and bale spike!

Gamepad control for the PC version: Actually it was planned for the console version - but due to many requests from the community we preponed it, so that you can "plow" your fields with the controller on your PC!

Grain maize incl. cutter: You grow your maize not only for the silo! With the new type of crop and the appropriate machines we expand your possibilities for the cultivation of your farm.

Radial menu control: No stress! With this clever control system we have created the possibility to reach and operate the many functions of the machines comfortably in connection with the Quickbar.

Unloading into silos: Moving silos can be loaded individually and the piles can be distributed and compacted with the shovel!

In addition, you can look forward to the following content with the V1, which was not on the schedule in 2016:

Extensive tutorial mode: We give you about 50 tutorials that can be started at any time via the menu and explain the numerous functions & features in the game.

Career learning mode with certificates and scenarios: In addition to the simple sandbox mode, we have also included a complete career mode! Here you first have to earn certificates (as a result of successfully mastered tutorials) in order to unlock individual scenarios. The multi-level scenarios depict various agricultural tasks in a realistic sequence and at the same time convey well-founded specialist knowledge. In this form and scope this should be absolutely unique in the world of agricultural work simulations!

We will present more details about these two completely new points, which stand for several hours of fun, with the publication.

As you know, we have entered into two partnerships in the course of the last year to support our work. It was part of our learning curve to understand that we can't do the project without a partner as intended. The Landwirtschaftsverlag from Münster is the largest European agricultural publishing house, providing us with extensive expertise and data that will ensure the level of realism we are striving for throughout the game and especially in the new campaigns. With Toplitz Productions from Irdning/Austria we have an experienced publisher on our side, who helps us to better coordinate the many levels of development to achieve a good gaming experience for you. Furthermore, Toplitz will of course mainly take care of the marketing of Cattle and Crops.

In this context, Cattle and Crops will also receive the title addition "Professional Farmer - Cattle and Crops" from V1 onwards, which is intended to concisely describe the content of the game. (For you and the game nothing will change because of this addition to the title, of course!)

We are very grateful to our partners for their support. This will enable us to achieve our goals better and faster.

We hope that this more detailed statement will answer many of your current questions. Furthermore, we are of course available in the forum for further questions, which we will answer - as far as we can to the best of our knowledge.

THANK YOU for your longtime loyalty & support! We are now looking forward to taking the next big step with you! THIS IS JUST THE BEGINNING!

Your Cattle and Crops team from Masterbrain Bytes