Are you ready for the new generation of farming simulators?

Professional Farmer: Cattle and Crops takes you out into the countryside and impresses with its depth and attention to detail! Experience how exciting being a farmer can be. Work your fields with original machines or coordinate these tasks with your workers. Bringing in the harvest, caring for animals, and getting the cycle of food production going are hard, but also satisfying tasks of a farmer. Follow your vocation as a farmer with all the challenging and beautiful aspects modern farming has to offer: detailed machinery; authentic sowing; fertilizing and harvetsting; livestock management; and realistic weather and nature conditions.

Professional Farmer: Cattle and Crops is the ultimate farming simulation with a unique and unrivaled level of detail.

Soil Update and Save 60% 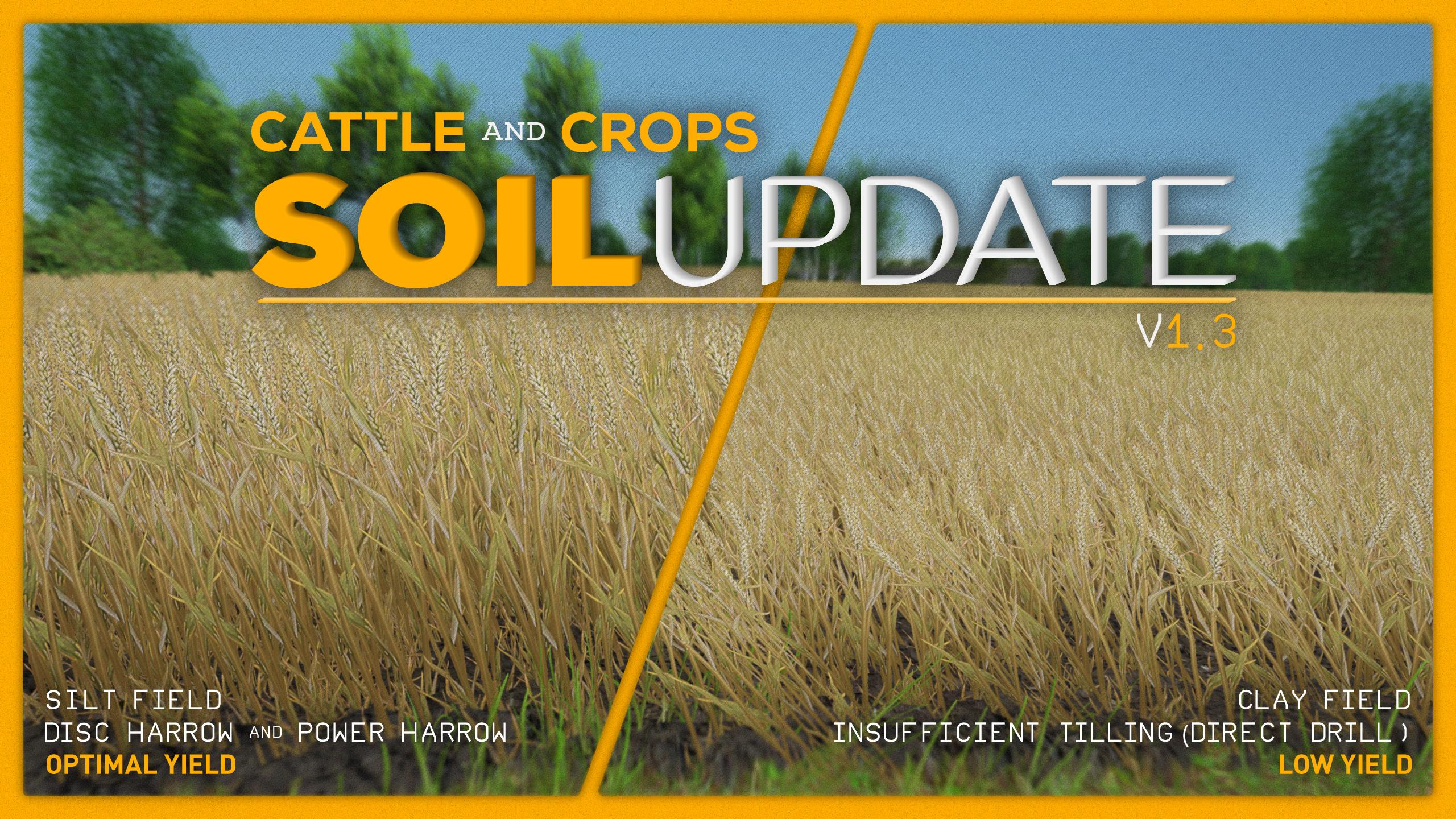 With today's update, we are introducing a new soil system. Roughly summarized, fields now have different soil types that have different effects and must be worked with the appropriate machines (disc harrow, plow, subsoil loosener, power harrow, etc.) for optimal yield. This new function can also be deactivated in the options if required, and the same now applies to fertilization (NPK). To make it easier to get started, we have also created new tutorials concerning the soil.

Soil elements and soil types:
There are up to 31 different soil types, each consisting of different proportions of sand, silt and clay. For each field, you can view the current soil type, the definition of all soil types and their composition in the field menu using the soil texture triangle, which is also used in reality, below the map. By hovering over other soil types, their properties can be previewed. 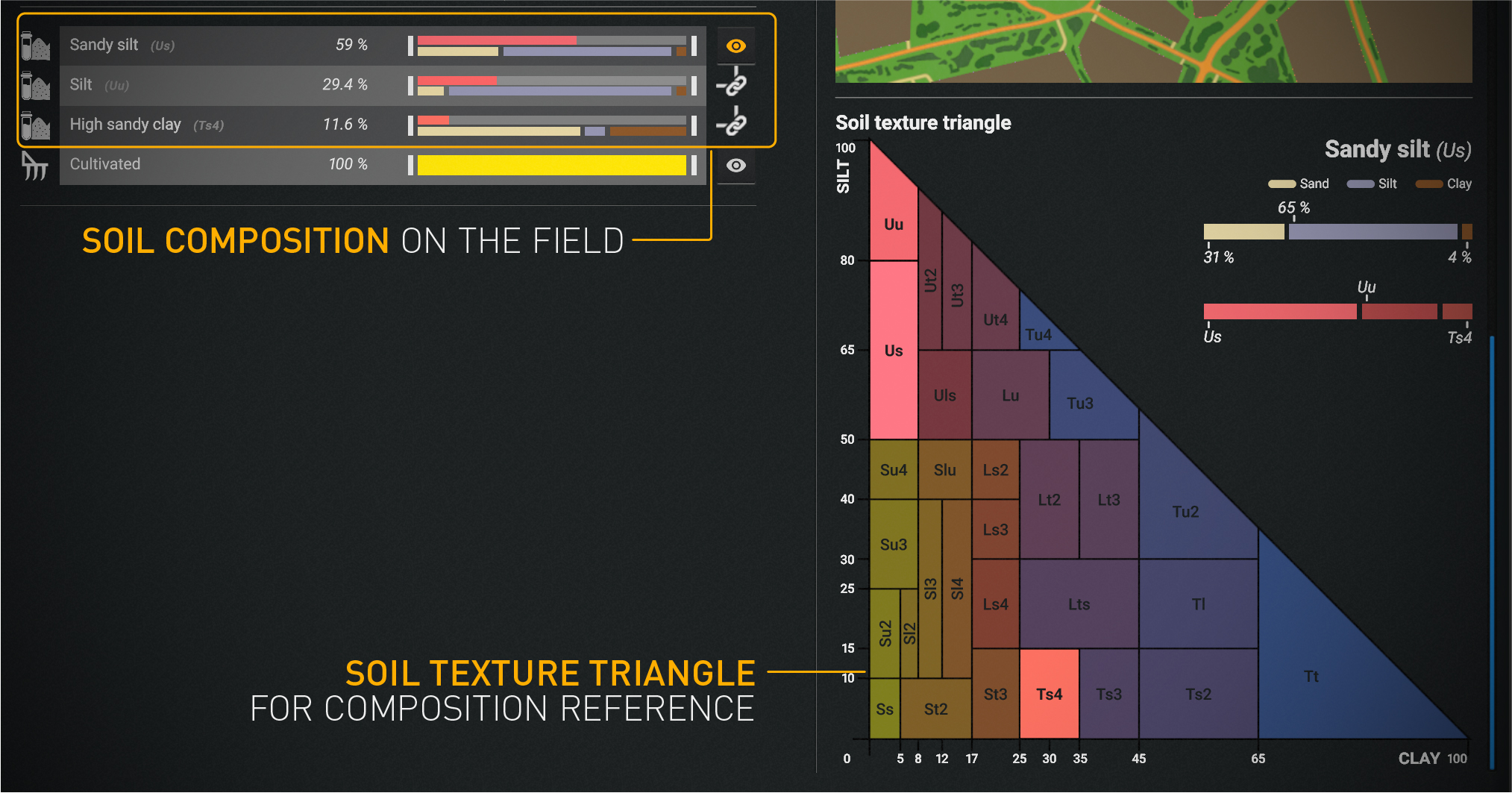 Soil condition:
There are now a total of four soil attributes that affect the plant: crumbliness, crumb density, upper density and lower density. The different implements have different effects on the soil. For example, the power harrow tends to increase crumbliness, while the subsoil loosener primarily loosens the lower soil. The plow, on the other hand, mixes the upper layers and loosens them up at the same time - but also increases the subsoil density due to the plow pan. Depending on the condition of the field and the soil type, different tillage implements must now be used.

General influences on the soil:
In addition to active tillage, there are two other influencing factors. Firstly, the weather: higher temperatures, for example, cause the soil to dry out. A lot of rain, on the other hand, can make the soil silt up. These effects have a long-term impact over the season. Secondly, vehicle weight has a direct influence on density - pressure is exerted on the soil at the tires based on the wheel load, which in turn increases density.

All this leads to the fact that at the end of the season, or the beginning of the next season, tillage is elementary. The crops also have different demands on the soil depending on the BBCH stage. It can therefore make sense to adapt the tillage to the demands of the crop.

Plant growth and yield:
As part of these soil enhancements, the plant growth system has been changed. The growth period is now regulated by temperature and sun hours instead of fertilization. The plants have a minimum growth temperature of 5 °C (41 °F), anything below will result in delayed growth. The warmer it is the faster the plant grows (growing degree days).
Both the sowing date and the associated growth time, as well as soil cultivation and fertilization have a significant influence on the yield of the crops. Thus, in order to achieve the highest yield, optimal growing conditions must be created for the plant. 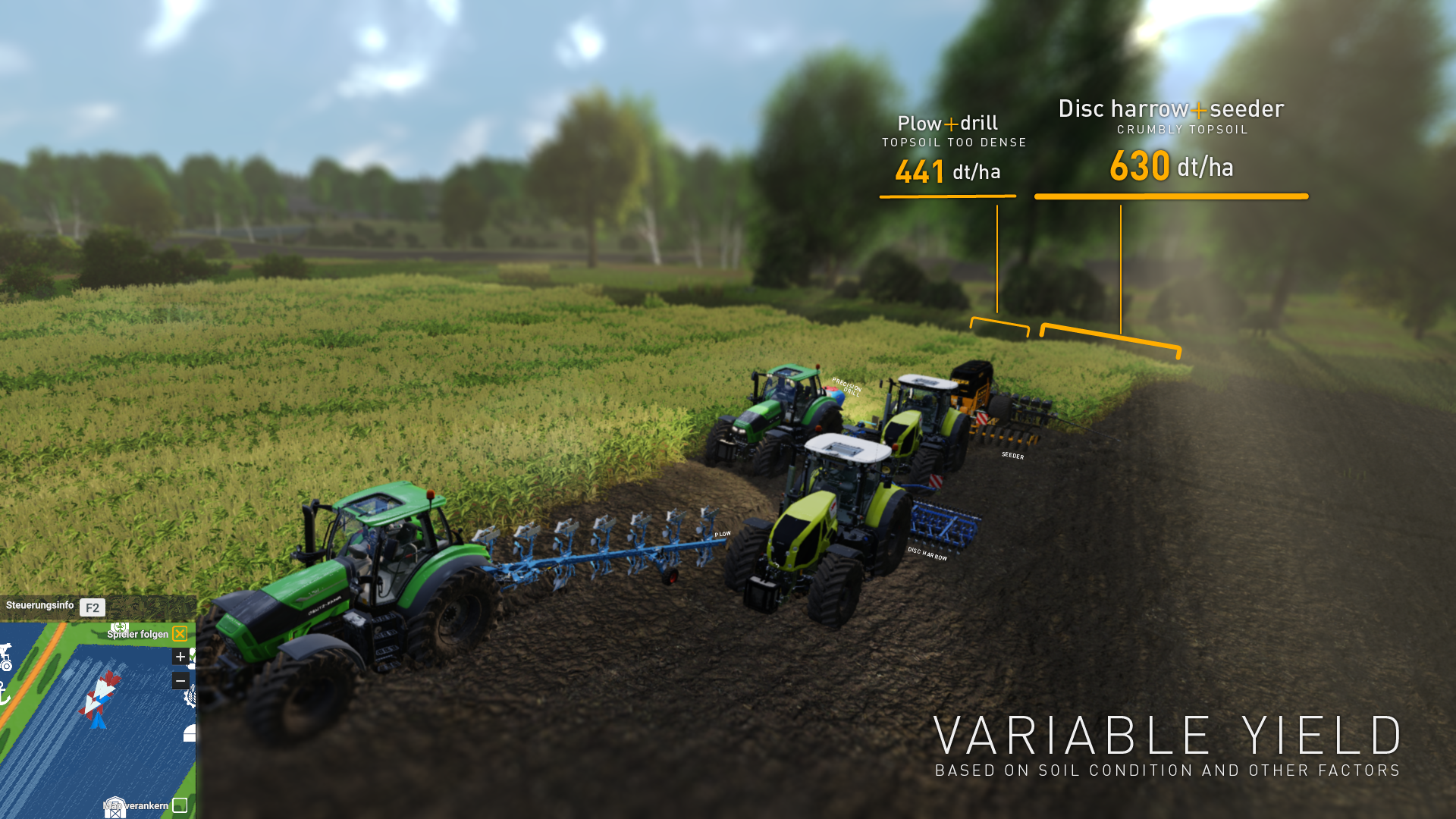 Calendar revised:
In order to be able to find the optimal time, the calendar has been extended by some information: the temperature and, if there is precipitation, the amount of rain are now displayed for each hour. A bug has also been fixed that caused incorrect weather conditions to be displayed. Lastly, the weather forecast has been limited to a maximum of two weeks. All days further in the future now won’t display any weather information. 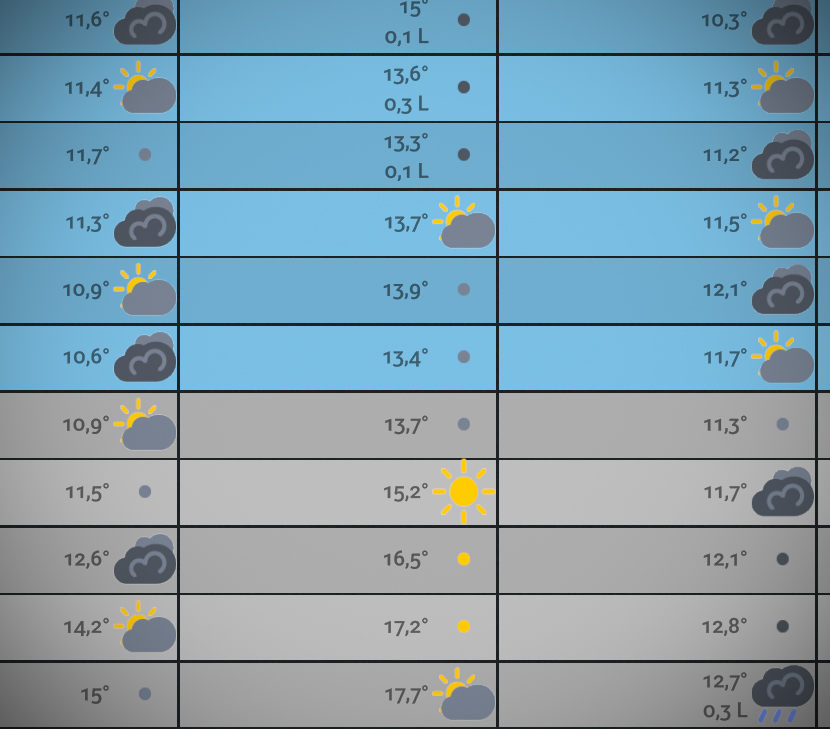 Revised field menu:
The field menu now allows you to view the potential yield of a field based on the current conditions, as well as a theoretical crop type (under “Fruit reference”).
The statistics break down the exact condition of the soil, the fruit and the resulting effect on the yield. This allows you to closely monitor your fields and adjust tillage or fertilization to any problems.

Tire tracks:
Different tires now also have different tracks on the field that match the profile. For modders: The tracks can be configured in WheelJoint, if the wheel generates tracks. Further exact settings information will be provided later. 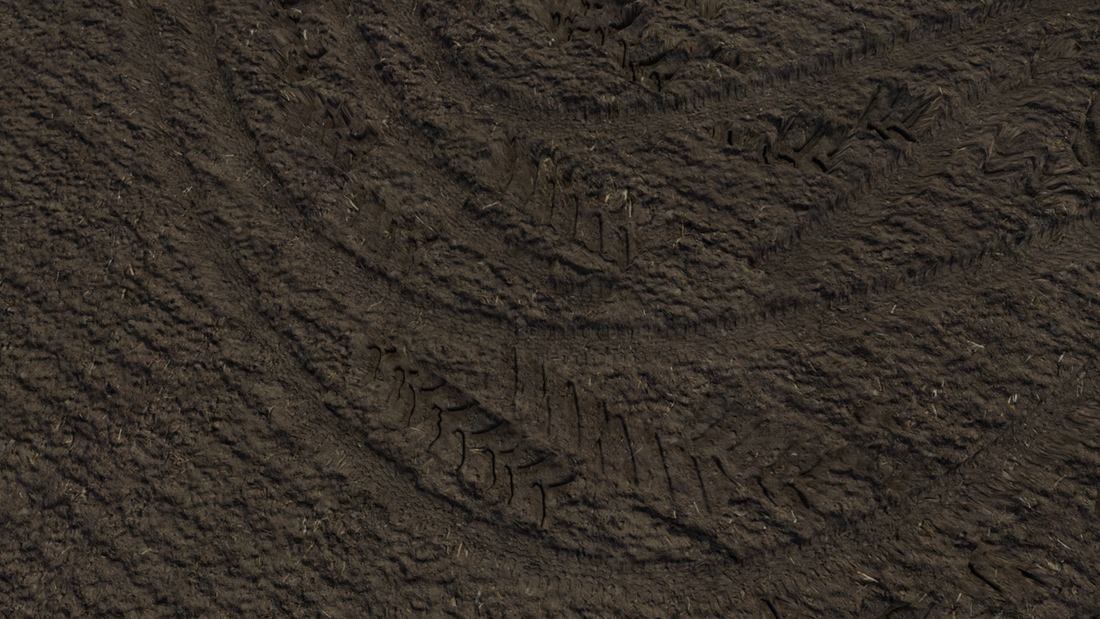 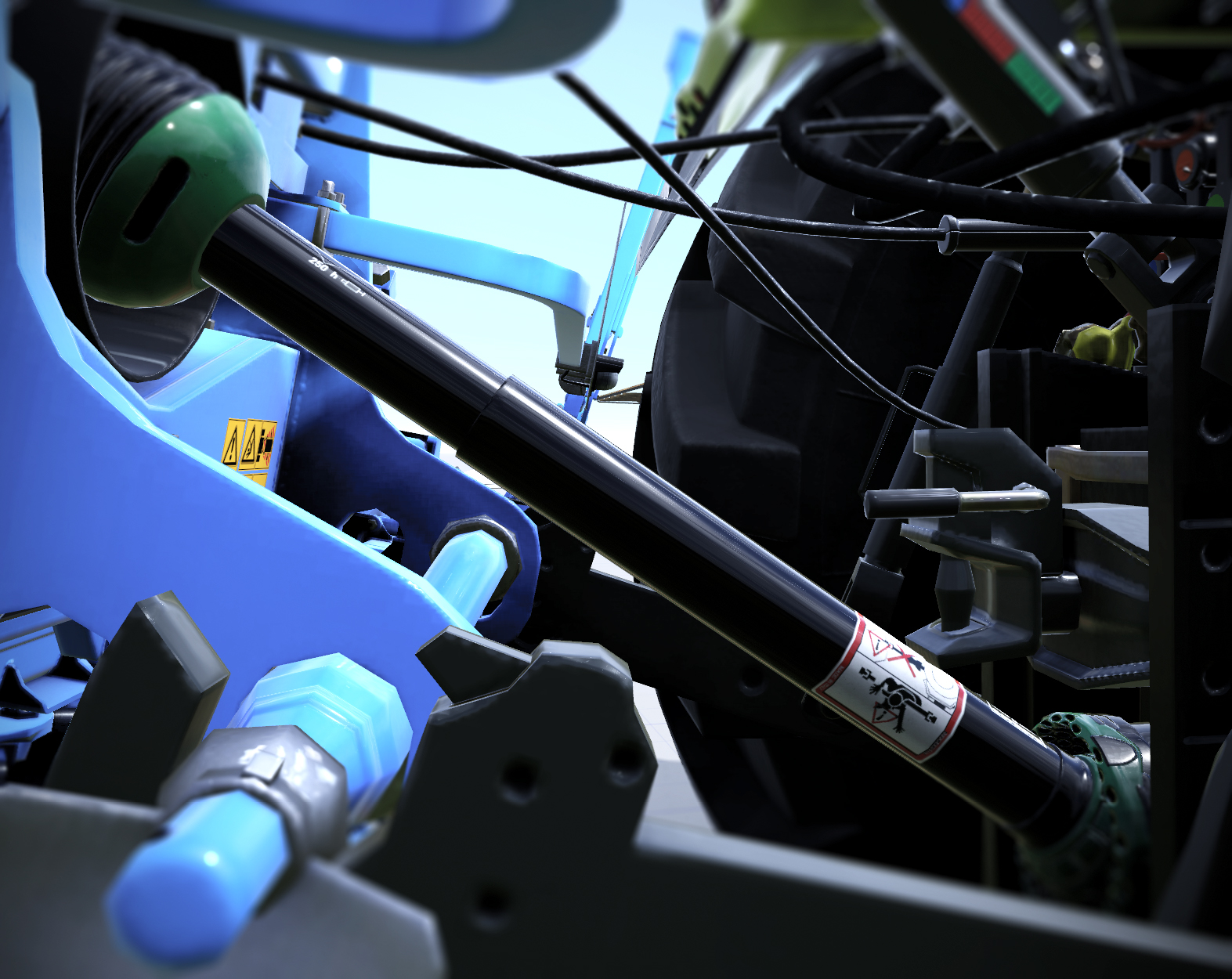 At the same time, there is also a PTO set with the PTO system, which includes three different connection heads, four lengths and two colors. To be found under "Base.zip → shared\pto\_ptos.wld".

Detailed info on how to use both collections/systems will be provided later.

New machines, Joskin slurry tanker and slurry cultivator:
A new vehicle combination in the form of the slurry tanker Joskin Cobra 13000ES together with three slurry cultivators (Terraflex XXL 6375/17SHK/2, Terrasoc 3600/9 SH and 5200/13 SH) offers you the possibility to inject the slurry directly and is thus the complementary alternative to the previous drag hose system. 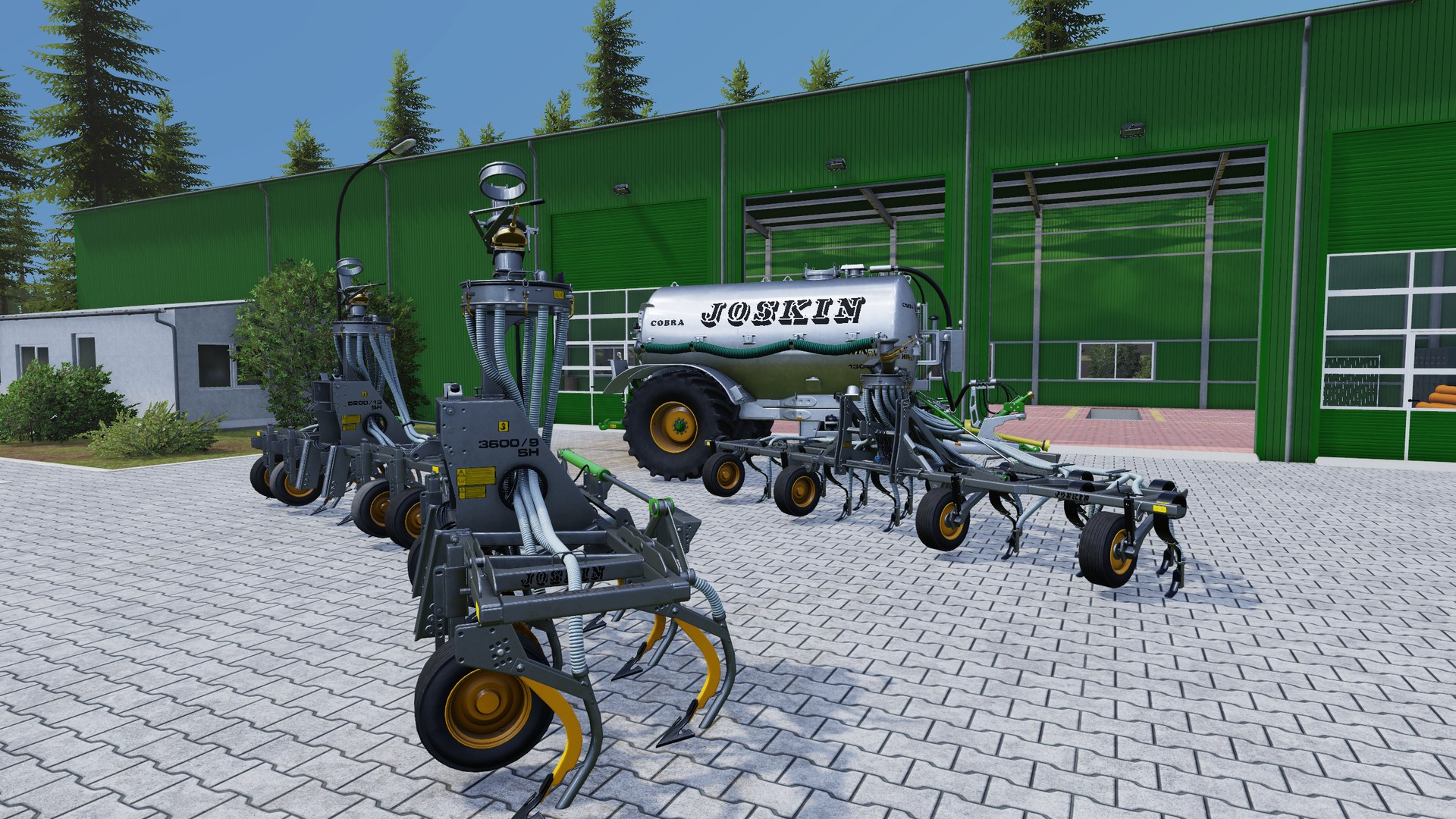 Is it Christmas already? Well, almost. Christmas isn't until next week, but we’re not going to wait that long.

Professional Farmer: Cattle and Crops Version 1.0 has been released.

We are on the home stretch to a huge milestone in the development of Cattle and Crops.