Post news RSS Catequesis or how to delay with style.

Hello, we have a new video and updates for Catequesis, please take a look and tell us what you think of it.


During this year of development, Catequesis has grown along from a tiny "say hello to my gun, monster" to a "We're opening the gates of hell, guys". We now have a strong and deep story, well built characters, new mechanics, monsters, weapons and scenario.

Chico: Oh, looks great, guys, but... where is the game? Your release date is now.

Well, the game is being delayed to 2014 during the "when-it's-done" season, and that's not the only bad news... the Android port of the game will be delayed surely more than 2014.

Chico: What?! This game was the little gem I wanted to play on my smartphone. I need an explanation for this sh*t.

Simple explanation : money. Our target is now a 10$ Indie desktop game. If we put the game at 10$ in Google Play, it will not be worth the time spent in the port because of low sales (and piracy ) we will probably get for it. The game was planned for smartphones, and it still is. We will do it when we can lower the price to 1$. Don't blame me, yell to my producer Mr. Indie Game Market. 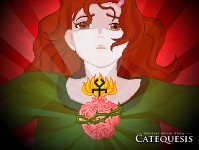 Chico: Ok, I can understand. Let's talk about the teaser video then. The piece of music is amazing, will be part of the OST of Catequesis?

The track is "Danza Oriental" by spaniard composer Enrique Granados. But it won't be part of the game, the soundtrack is being made​​ by Prison Food Sucks, a French composer with experience on electronic and chiptune music.

Chico: Nice, and the action of the game? In this video, Catequesis looks like a mistery-romantic-story-guided game.

Yeah, this is quite not the Action Trailer of the game, that's for sure. But there are still fights in Catequesis, we will have several weapons, enemies and action situations. But not only that, the player will be able to avoid the enemies with stealth or just running like a chicken.

Chico: Sounds good, so we will have to wait for it. Anything we do for you to help? 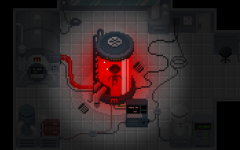 That's a good question, we are looking for a Japanese pal, we want someone who love video games to be part of the project helping us to make a link with Japan. Also we want illustrators to make Catequesis fanart.

Nothing more, now, time to drink some sangria and go fiestas! I mean drink coffee and make video games. (u_u')

What the hell, give me a big chorizo of images! 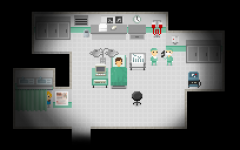 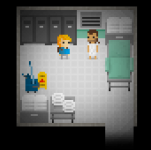 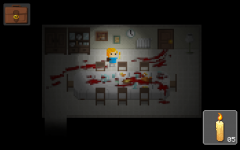 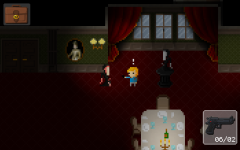 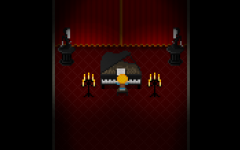 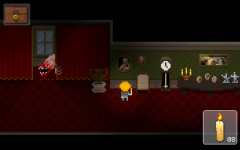 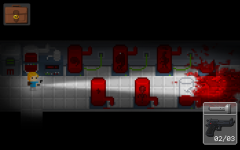 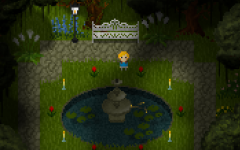 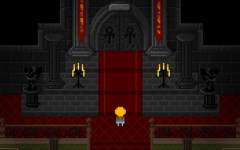 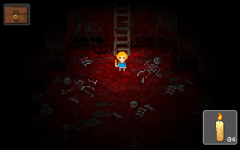 This game is on the edge of blasphemy as the symbols displayed here comes from the Catholic faith, this is very sad...

I would recommend watching Penny-arcade.com It's a strong video about how you need to pull from your life and experiences to create a game design. Just because a game uses symbols from a religion doesn't mean the game is trying to insult the religion. Look at the entire god of war series or darksiders. Those games rely heavily on religious text and symbols. Are they too Blasphemous? I would say no, while I am Taoist I don't get upset when someone makes a story dealing with Taoist symbols (which happens so much its not even funny) I just understand that Taoist has had a huge impact on the world just like any religion. Be proud your religion is embedded itself into society.

God of War relies on the Greek mythology and Darksiders relies on the Book of Revelations, both builds a game *around* these resources. However, on this game (or at least in the picture of the female character on this post) the Sacred Hearth is being object of parody, and The Sacred Hearth isn't just a symbol God's divine Love for us but it is also a strong devotion. And parody by its very essence can end on blasphemy when is applied to these imagery and symbology.

The developer could perfectly stop the parody and use another symbol, the game is good, but dancing on the edge of these things isn't good.

It's a game. If you're going to analyze it that deeply, and negatively, then obviously this isn't the game for you.

If this sort of design decision are hold, then this game isn't for the people developing it either, by its negatively spiritual implications ...

I agree. If you want to review a game you get one rating and a nice paragraph area for you to tear as many realistically non-nonsensical beliefs as you'd like to have effect your play-through. That's your prerogative, I swear if you leave one more multi-paragraph comment I'm going to eat soo much shell-fish your god will have no choice but to show himself to smite me.

Hi Shackra, i'm sorry that you think that way but i'm not making parody about it, maybe my way to write the posts are stupid, but the game isn't. I'm catholic and for me is usual mix in my art catholic references, and I see it like something to be proud of... anyway in this game the religion references are totally justified for the story.

Thanks for the reply, Babeco, I'm glad to see a fellow Catholic developing games!. I'm happy to know that you didn't intended a parody, but it looks alot like the Sacred Hearth and some of your fellow Catholics will be alarmed not just by the issue in itself but also the spiritual effects on the developer(s)/players.

If the underlining history requires this sort of references, please state that clarification somewhere accessible on the page project.

If this sort of design decision are hold, then this game isn't for the people developing it either, by its negatively spiritual implications ...

You are so close minded! Please respect the belief of everyone and keep your biased ideas for yourself.

This game looks great. Just be sure to open the review section soon-after you release the game because you have an easy 9 here and depending on the story maybe even a ten. Keep up the good work.

Wait a minute...I see a slightly important problem. Are you using the same UI for the mobile and console version? It loos like you might be. If so I think I'll need to deduct a point. If not well...my apologies for not paying close enough attention.

Yes! Good. Mobile phones be damned, let it be on our glorious PC's!

I really like the way you write these updates, rather immersive! Good work :)