Catequesis is a survival horror game based on 90's RPGs gameplay, with a really strong and immersive story & a 8 bit graphic style. This game will be released for Android, PC, Mac & Linux.

Synopsis:
Daniel helps his girlfriend to save her father's life making a strange religious ritual with his blood, but something goes wrong and the entire building is taken over by a grotesque creature coming from beyond. Daniel will have to solve all the mysteries hidden in this old place to defeat the evil forces and take back his girlfriend... but not everything is as it seems.

Time to sleep for the creatures of the blood Hello amiguitos of los cartuchos de famicom. We have been working really hard during the summer and we have some great news that will blow your mind. Kaboom!

Chico: Oh my! So long that we have no news that I'm dying to know!

The game is cancelled. Bye! 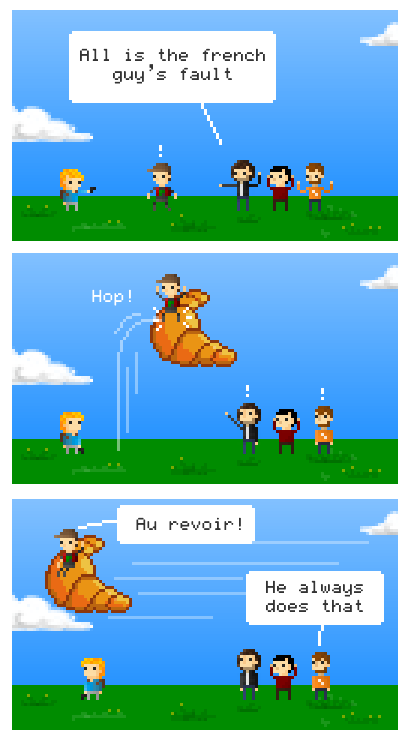 Ok, let me explain, the game is not cancelled, it's on hold. A year ago we stopped to drink sangria in the beach and we thought, “hey, this game is so big that we will never finish it”. We have done a lot of the game, but the perspective to finish it was no good because the project is too ambitious. Yes, we fell in the classic trap everybody know about. And it’s fine, is something common, and you have to stop for a second, take a deep breath, get a bit dizzy, and think about a good solution for this issue.

So our solution was this, pick all the features that were already working in the game and put it in a new, smaller & less ambitious game. We will focus our efforts on finish this new game and once it's done, we will continue with Catequesis.

Chico: A new game? Oh pal, this is a nightmare, i mean, all the efforts and work done for Catequesis, and now, a new game?... Also, who can ensure me that we will not fall in the same mistake again? huh? tell me, who… WHO MODAF*KA!?

But, the new game is almost done.

Chico: What? What do you mean with “almost done”?

The game is now close to beta. It means the game is almost done and we are polishing it. We didn’t want to make the same mistake than with Catequesis, doing the hype with nothing finished. So we stayed quiet until now.

Chico: Bastarditos! Ok, then show me the new baby.

Nope, not now, we are preparing all the material for a proper announcement plus greenlight campaign. So you will have to wait… at least one week more. In any case, i will show you a single image.

That ghoul took my money sir.

- I knew about the chemicals, but no one told me about the blood transfusions. - No? it was on the last memo pal. - Outch!

Walk around with me, creature.

In my head I have two demons, one is Baphomet and the second is Joseph Freiherr von Hammer-Purgstall. (O_O)

- My name comes from the ancient Mesopotamia, buried in the dark ground of the Tigris river since millennia... - What's your name? - Paquito (n_n')

You should check the closet everynight...

That's a very interesting title! Definately tracking!
One question through, I see the lighting system is already very nice for the atmosphere, but will active shadows be available?

Hi, unfortunately, having active shadows on a 2D top down perspective is really hard to achieve, technically speaking.

In 2D, you lack the information of volume, and this is mandatory to be able to cast shadows or modify light casting.
Maybe a future version of our engine and editor will allow to define volumes manually. this would be definitely a nice addition :)

And.. Would it be possible, make to game "user translation"? ...

Will cost how many game on Android?...