The scripting system is now approximately 40% functional with six of the core classes now fully implemented! We’ve also completely revamped the diagnostics suite and squashed a whole lot of bugs! 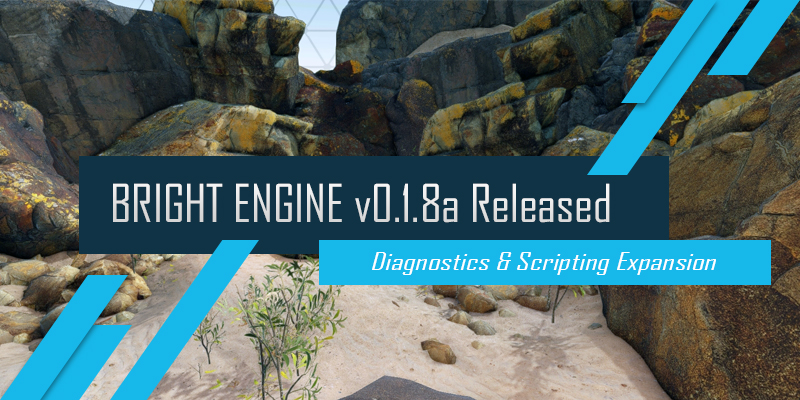 It’s been a trying time for everyone due to the Covid-19 pandemic, and unfortunately it has caused some disruptions to the development of Bright Engine. However, things are now getting back on track and we’ve managed to make excellent progress despite the ongoing situation. The scripting system is now approximately 40% functional with six of the core classes now fully implemented! We’ve also completely revamped the diagnostics suite and squashed a whole lot of bugs!

In the last update input triggered script events were introduced. But aside from getting the console to print “hello world”, there was no scripting functionality. We’ve now expanded the scripting class base to include - Cameras, Lights, Paths, Sounds, and Waypoints. That means you can control any of these objects by script!

We’ve also begun building up a base math library to speed up the process of performing complex calculations starting with a Vector2D, Vector3D and Vector4D math classes, while also laying down the foundation for more advanced calculations such as complex numbers.

A new addition to the object library of Bright Engine is Trigger objects. Being able to execute scripts using a mouse and keyboard is important, but games need far more flexibility than that. 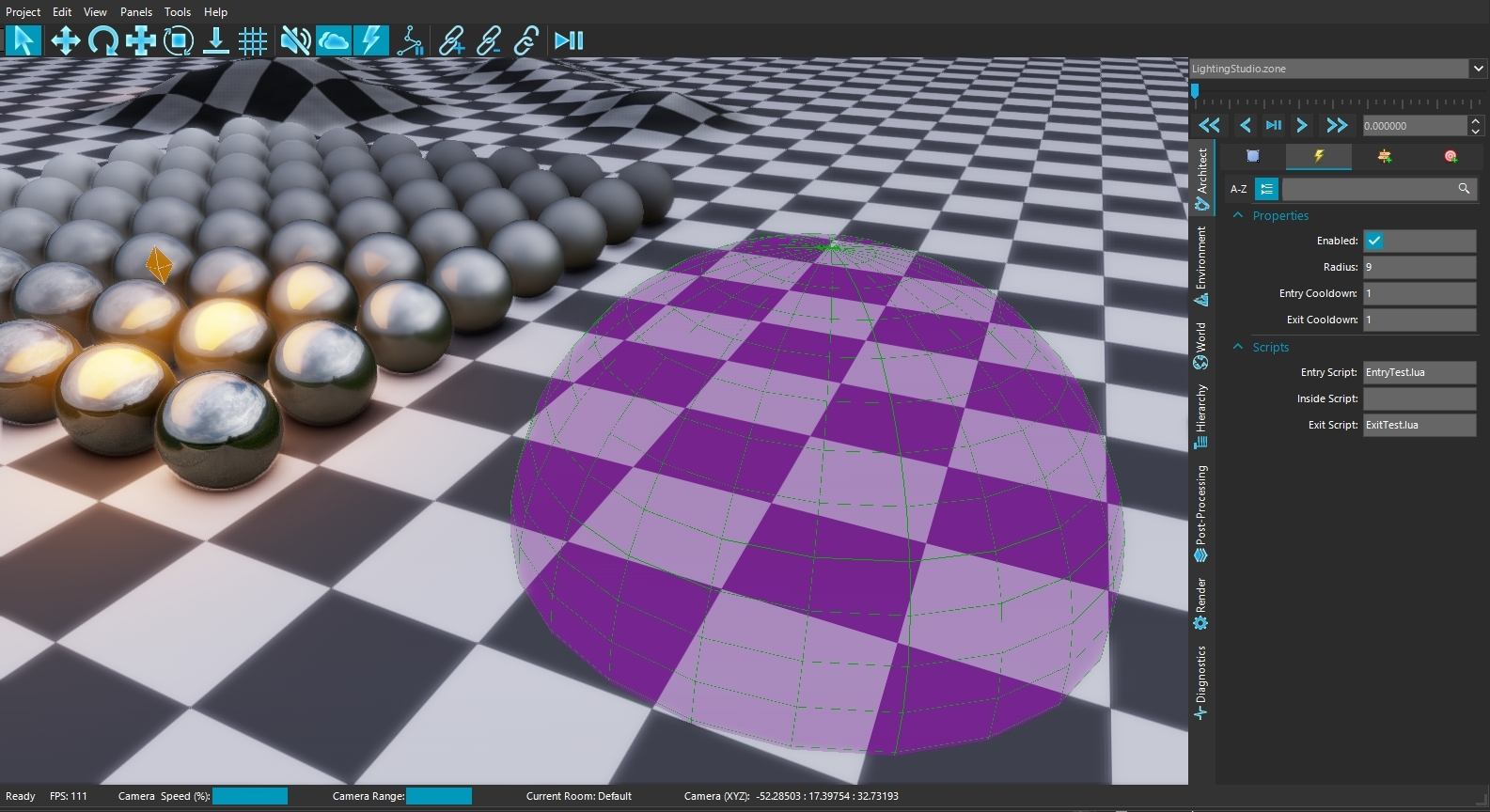 Trigger objects are invisible areas you can place throughout your zones which will execute a specified script when the camera enters their radius.

Since the main theme of this update is scripting, we’ve made several improvements to the user experience of the Script Editor itself. 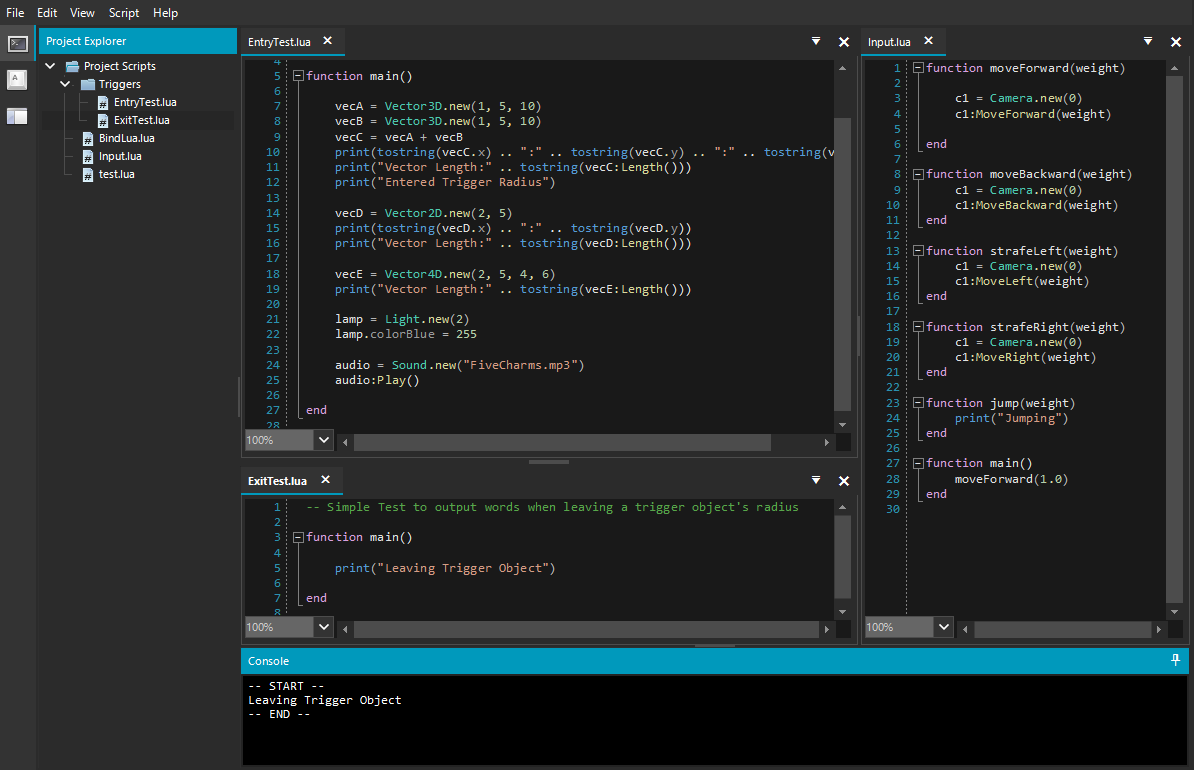 The code editor is now equipped with a more robust and optimised syntax highlighting system, along with an autocompleter for functions and object properties.

We’ve also made some tweaks to improve the in-editor documentation tooltips for a clear explanation as to what each function or property does, and how they work. 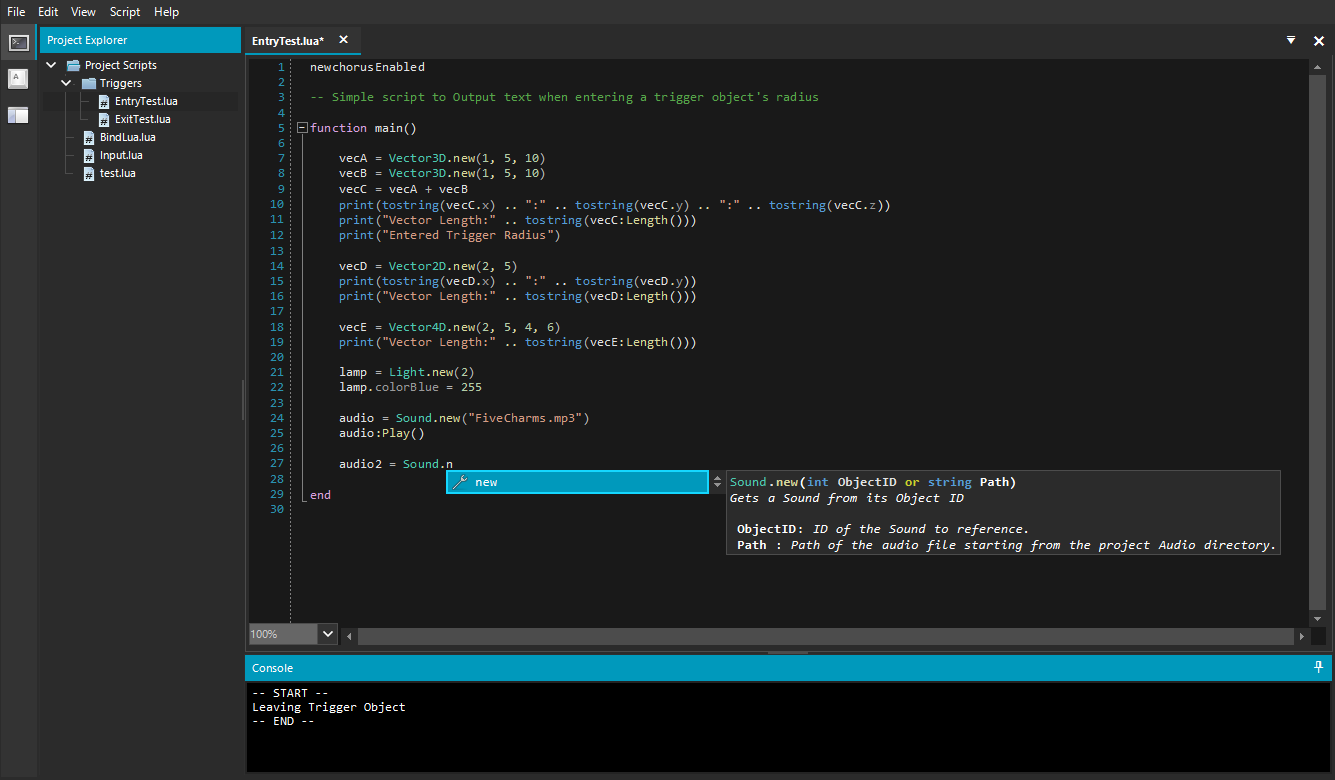 Beyond these improvements, we’ve also added a file save catching system to stop you from accidentally closing the editor without saving your work, as well as changed the default weight of a keymap to one instead of zero.

The World Editor has also had some attention. 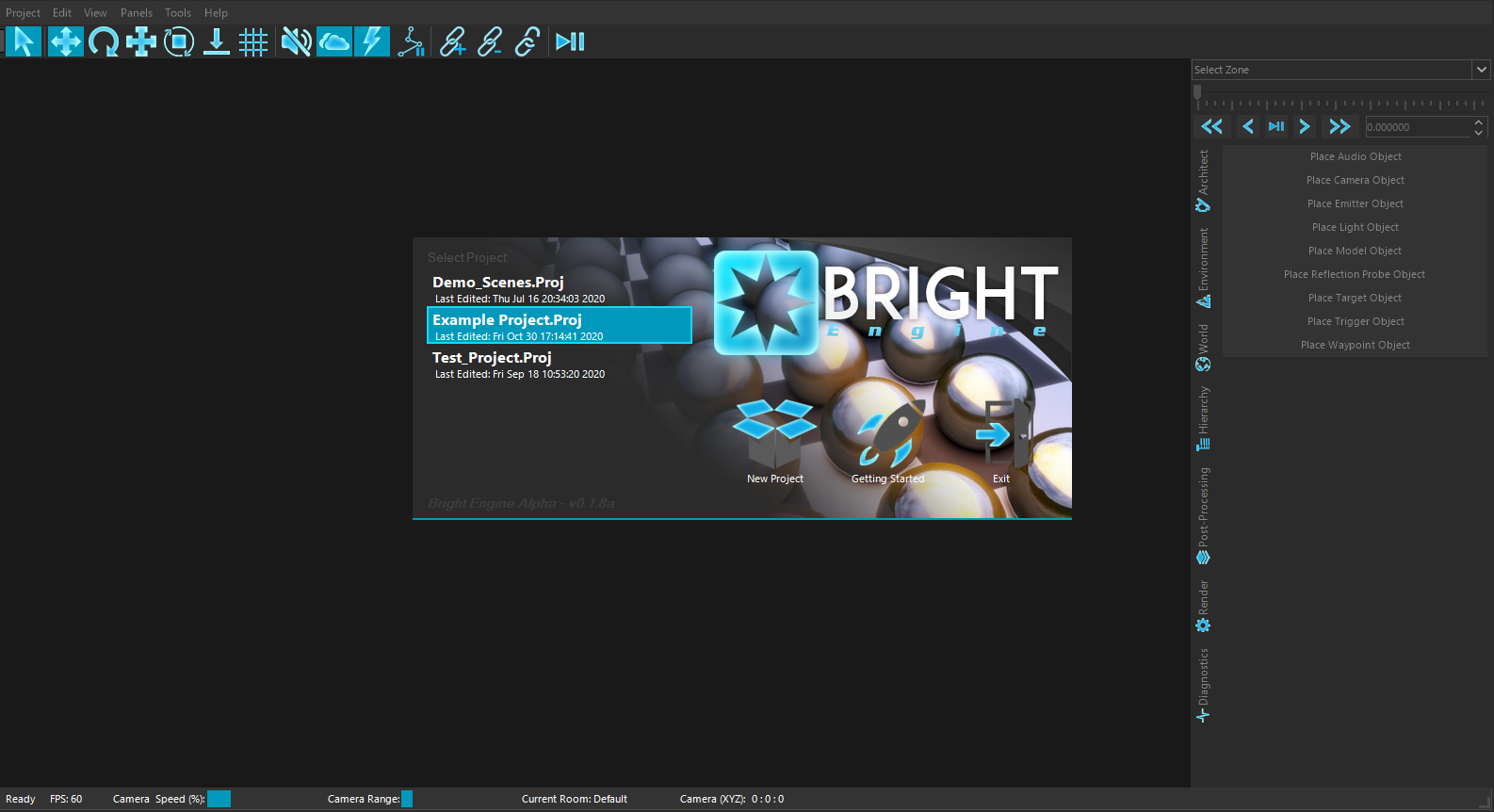 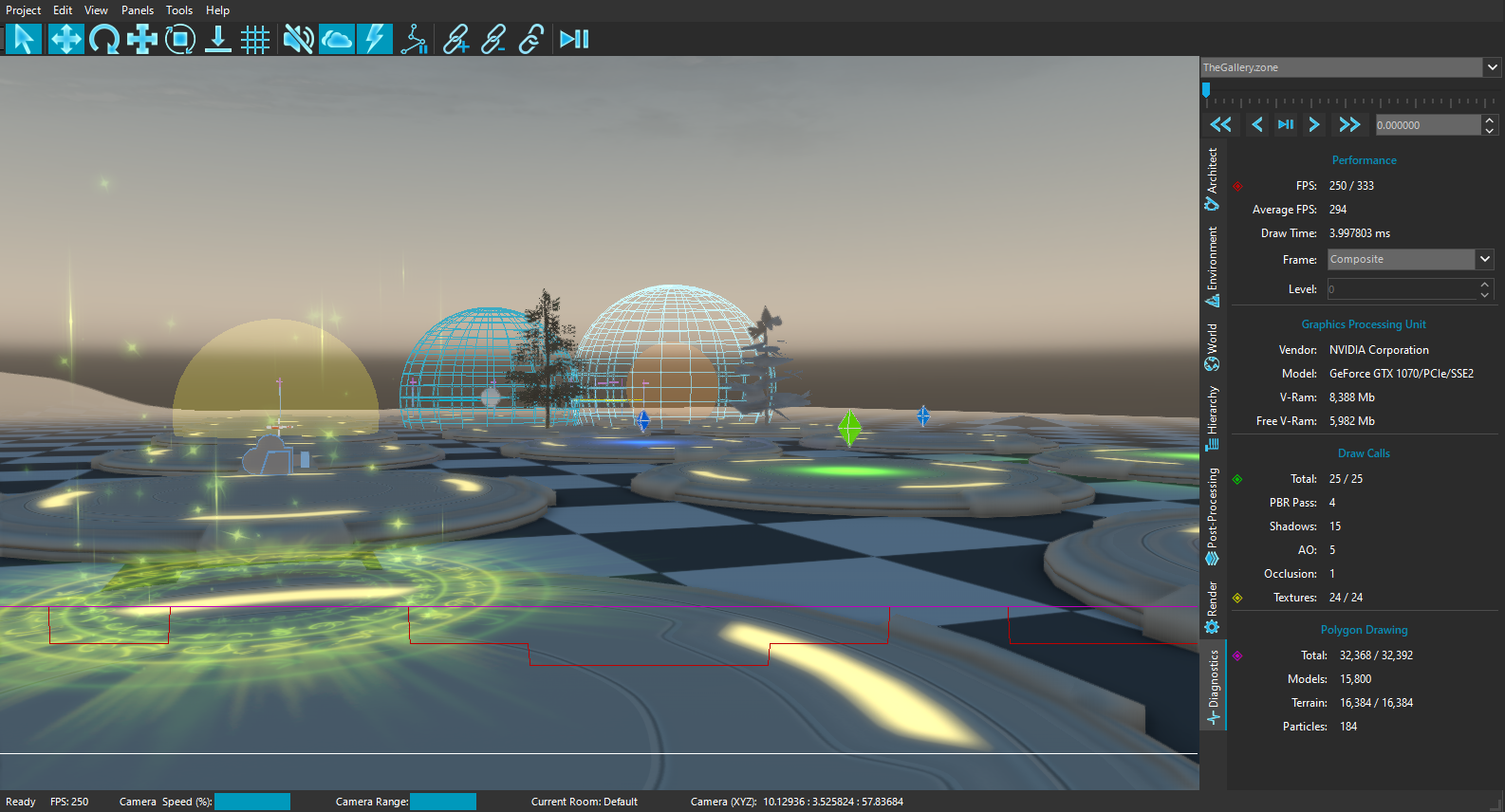 Data and performance tracking is now far more accurate, as well as faster. A big problem with the previous version was the sudden decrease in performance once the diagnostics suite was opened. This is no longer an issue and has subsequently allowed for more variables to be tracked over time.

We’ve also taken the time to adjust the layout of certain components within the UI as well as fixing some visual glitches. The object Place buttons are now in alphabetical order, icons in the hierarchy are thematically consistent with the rest of the editor, and some default values have been adjusted for a more intuitive workflow.

The zone hierarchy has also had some under the hood improvements. It now performs an object validation when loading zones to ensure any entries of missing objects are not included in the list (this eliminates a lot of problems where on the rare occasion you could select an object that didn’t exist causing all sort of weird behaviour). We’ve also added a shortcut key to hide/unhide the entire selection of items within the hierarchy instead of having to do them individually.

Further minor optimisations have been added to the waypoint path transformation routines, reducing the number of cpu cycles and resulting in a high end fps for users.

We’ve also made some further improvements to the Material Editor. 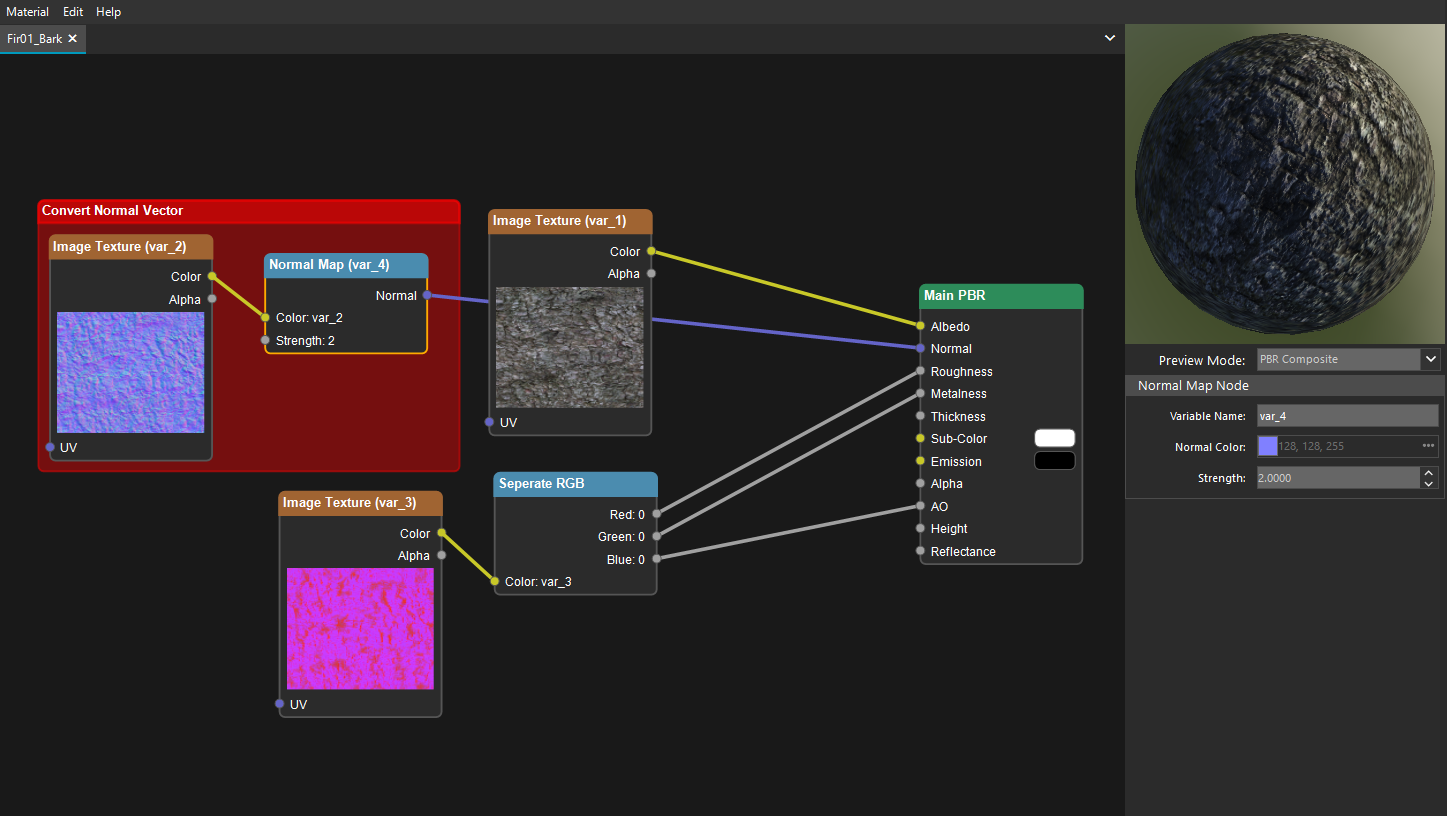 We’ve introduced a new material type system. You can now create PBR materials as well as fully Emissive materials. The purpose of the latter is to exclude objects from the lighting and shadow calculations if they are never going to interact with it. This adds an additional layer of streamlining performance, as well as laying the groundwork for further unique materials such as Glass in the future. 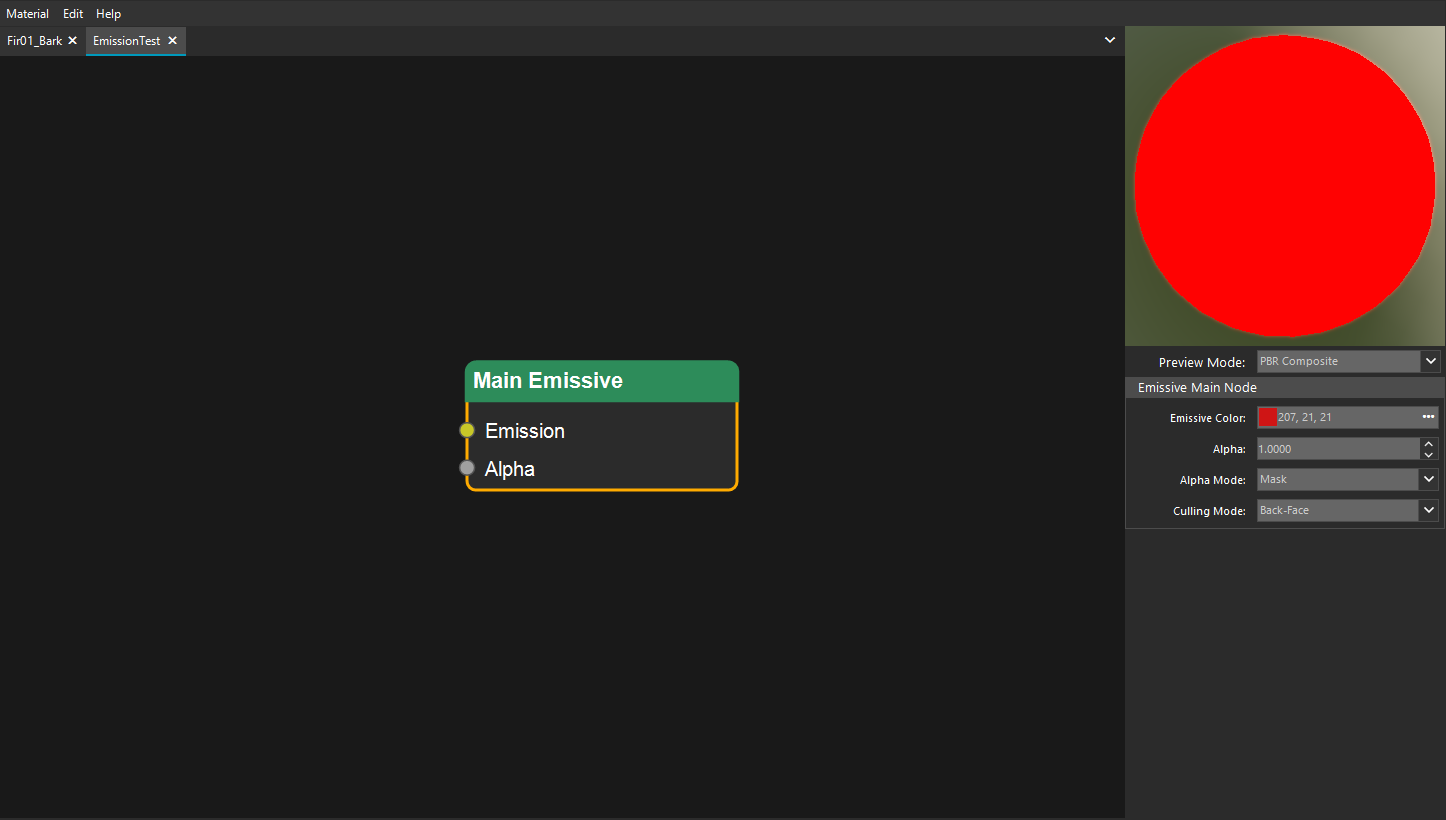 The node library has also been expanded with the addition of the Animate UV node. This node brings support for animated texture atlases on your models, allowing for some crazy effects, with both step and interpolated frame transitions.

As part of getting this node to function, the UV Coordinate input plug of the texture nodes is now functioning allowing you to apply transformations to your object’s UV coordinates.

Last update managed to excite a lot of new developers to join the alpha. This is awesome to see, but it did reveal a lot of hardware based problems with the engine. Therefore, the next update is going to be focused on fixing those bugs as well as some drastic improvements to performance! We’re also going to be continuing our efforts to expand the functionality of the scripting system to include more Classes as we slowly move closer towards implementing the first round of user interface systems! Stay safe and thanks for tuning in!