Post news RSS Boss Fights and Floating into a Void

Showing off the beginnings of a new boss fight as well as a few new spell runes for building spells.

I, unfortunately, lost my development computer since my last update which means only pictures today and not any new gifs. I’ve been focused mainly on fixing bugs that popped up with the switch to the new version of the jMonkey engine. There have been a number of hard to track down bugs like disappearing terrain with the SSAO on or tooltips not displaying for spells. It took a bunch of time but I’m glad to say that we are back to a stable state. This also gave me some time to fix some of the features I hadn’t had time to flesh out yet. For example, I’ve fleshed out the system that lets you equip “display” items. This lets you equip say a wizard hat which will display instead of whatever helm you currently have equipped and are getting increased stats from. I also spent a lot of time polishing parts of the UI that have broken. This is the current layout of the spell creation UI. 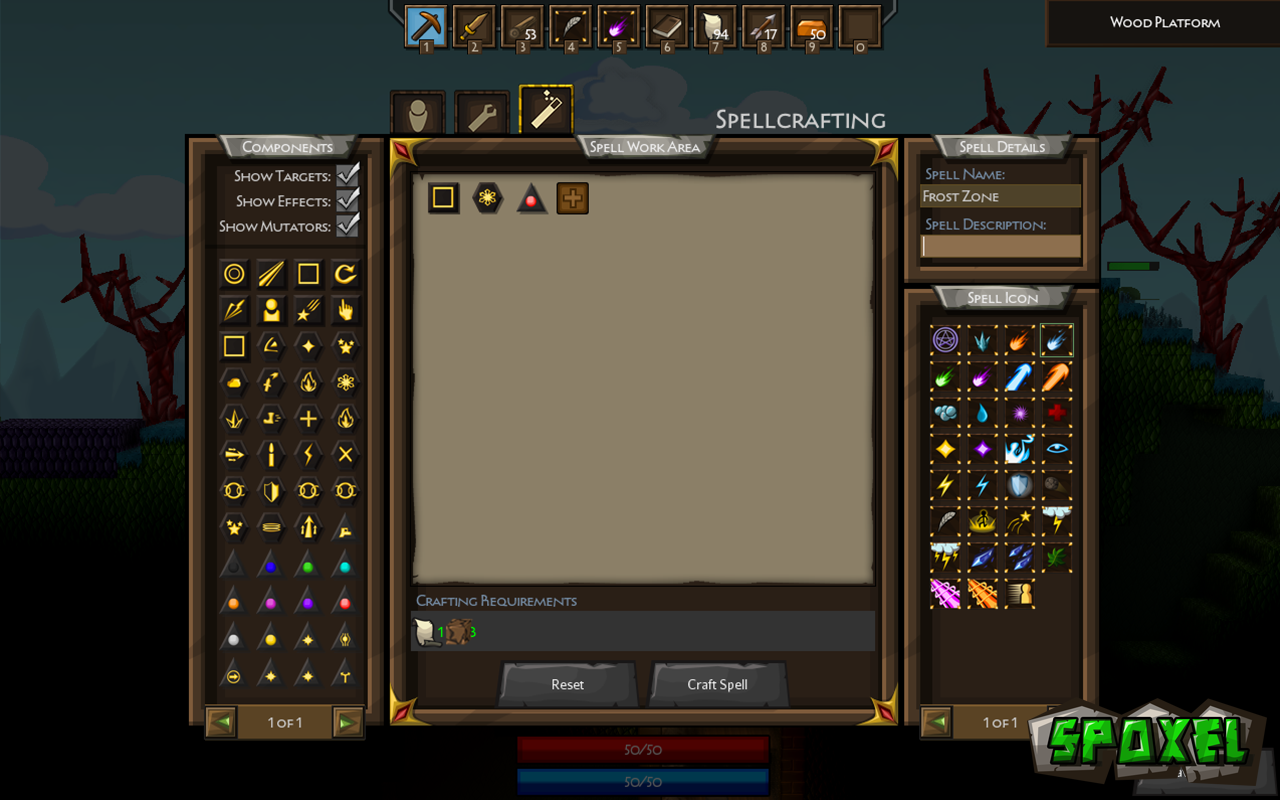 I still have some adjustment to do. I will be making a video about the basics of spell creation when I get my main development box up and running again.

I’ve recently been working through boss ideas for Spoxel and have a first draft of what will eventually be a new boss fight. 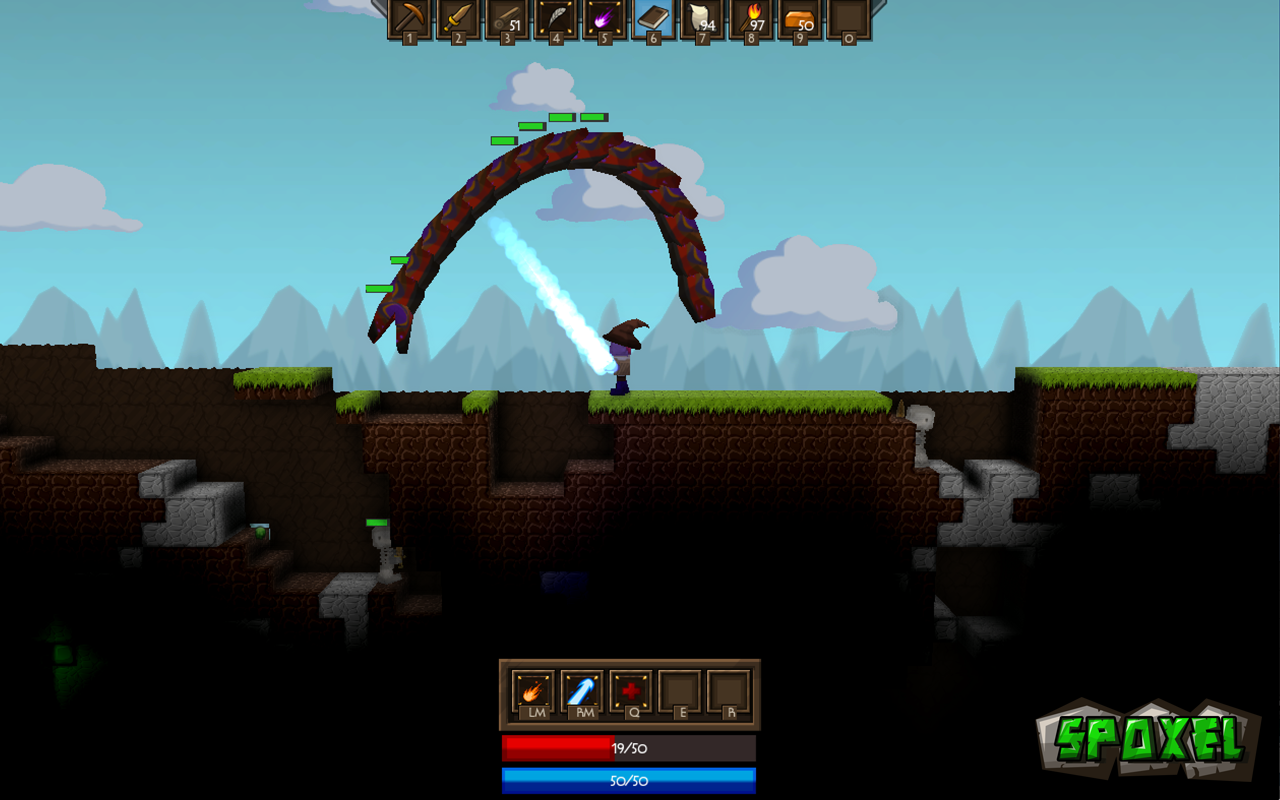 I’ve also continued making a number of spell changes. I added a new spell targeting rune called “Void” which creates a vacuum in space that pulls surrounding entities into it and applies any runes you have proceeding that shape. There are a lot of interesting ways to use it such as to create a teleportation vortex that will suck in enemies and drop them to their death or even just damage entities contained in it. 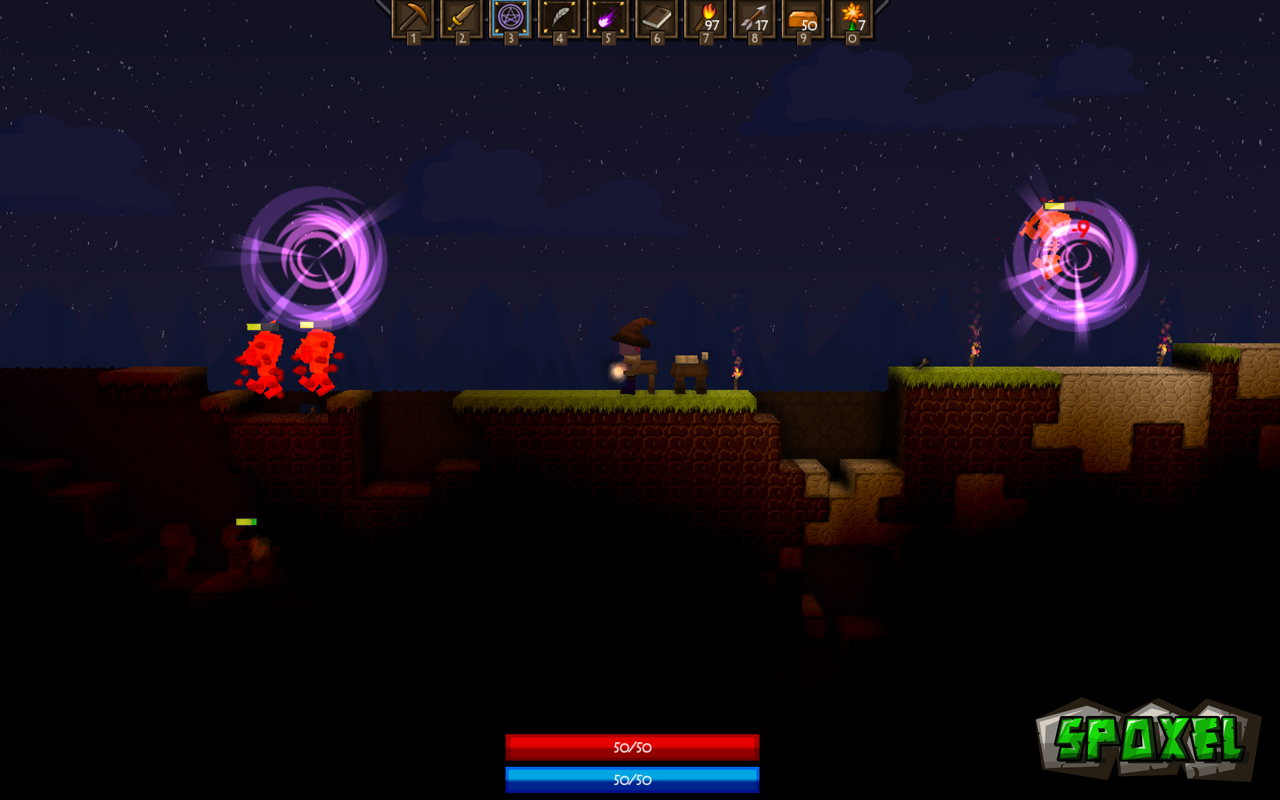 If you are getting tired of falling to your death you may want to make a spell with the new spell component slow fall. This also lets you “glide” over gaps and maintain momentum. 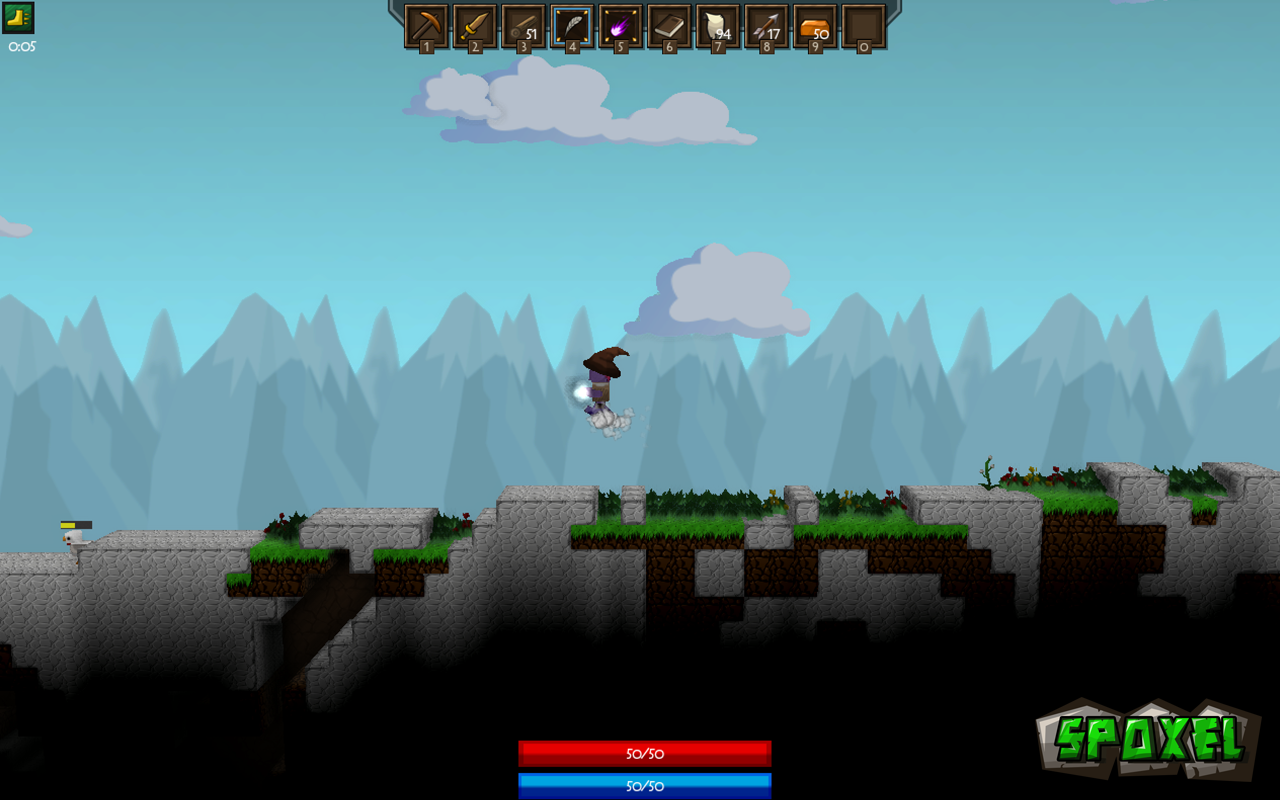 I’ve also added a new color mutator to the spell system. Right now this only works on a few effects but will eventually allow you to set a color for any effect or targeting rune you use. If you want to create a fireball spell that shoots pink fireballs then you will totally be able to do that. 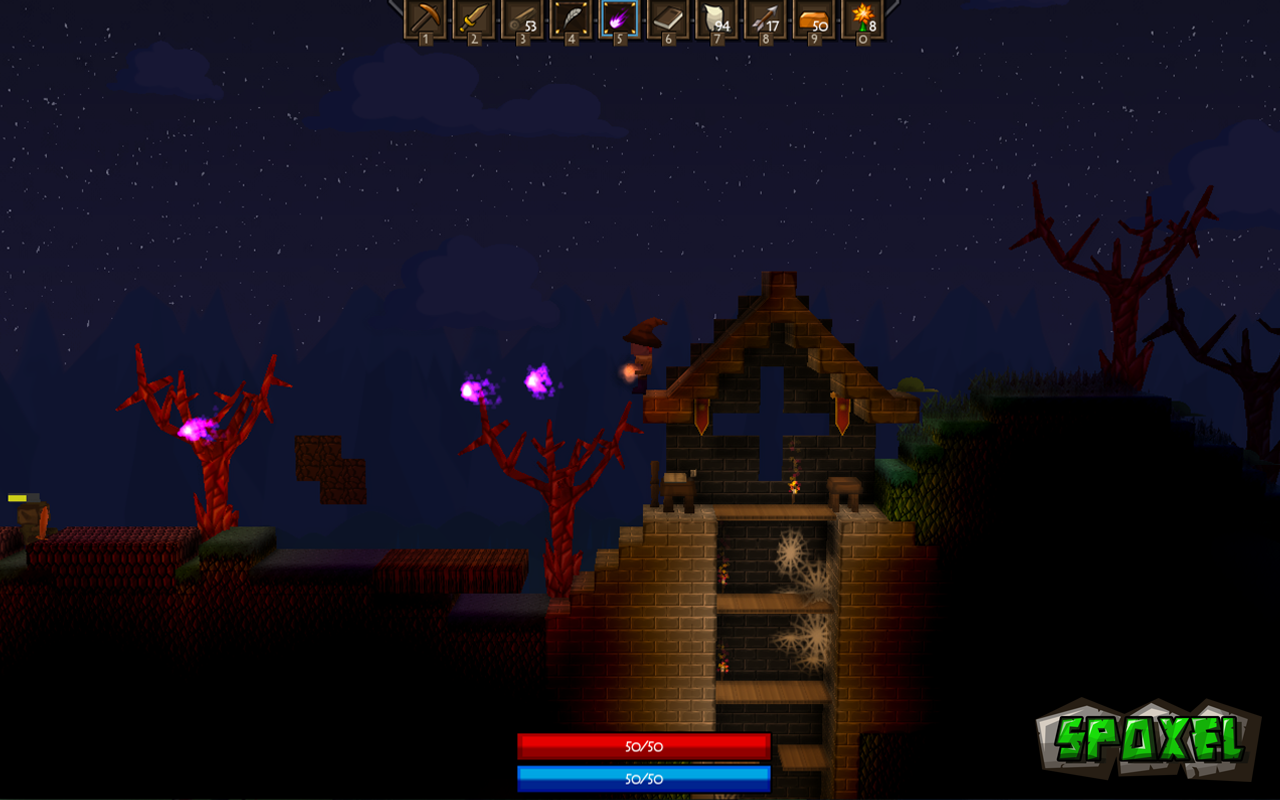 Or you could use a color mutator to color the void target shape green! 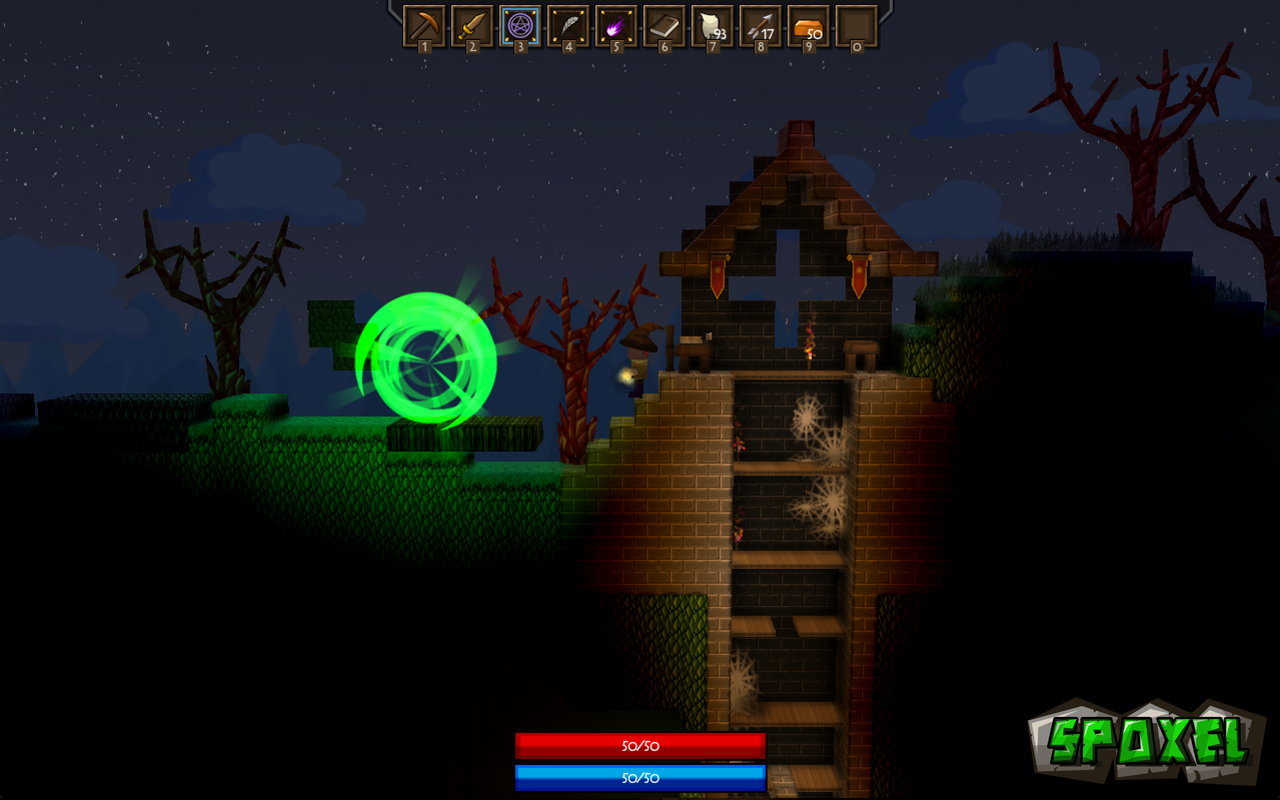