A devlog update for July 19, 2020 discusses the next chapter of the game and exploration of three new worlds. 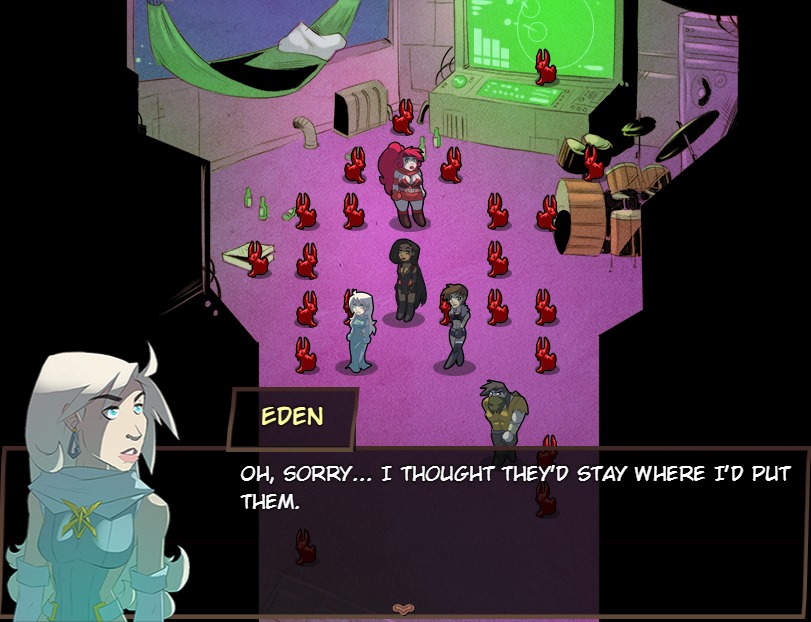 Good morning, devlog reader! Your humble dev here with some new developments in the world of game crafting and world building for Harmonic Odyssey: The Five Gods.

First, thank you for all the kind regards received since Driftwood Gaming's review. A big welcome to those of you who've started following the game and its progress, since.

This week, you'll notice I have Windows/Mac Demo updates -- version 1.31 is live and includes some fixes to memory issues within combat, as well as some aesthetic upgrades. Check those out if you haven't already.

Work continues on the game itself, with exploration into the final worlds/levels of the game. And yes, I mean that sincerely when I use the word "levels". I'd said in a previous post that some of the inspiration for Harmonic's world-building would come from classic platformer games -- more specifically, Megaman games.

How is that going to work for a top-down RPG, you ask? Considering the multiple-outcome pillar that one corner of this game's foundation has been laid on, I thought it would be fun if, during the middle portion of the game, the player was allowed to choose which realm they explored next. This might seem to be in direct opposition to the ways by which most traditional games of this genre do things, but as you're likely well aware by now, Harmonic Odyssey isn't trying to be traditional.

If you're a fan of the series, you know that the stage select in Megaman games are free-form in the same way. Sure, some stages are harder than others, but you might not know this until you do some exploration of each one. Too, beating one stage may give you an advantage when attempting another stage. You might receive an item that helps you defeat a different world's enemies. You might have a weapon one of the other bosses is weak to. Heck, you might find that the stage itself has been impacted by your triumph in a different world, and is now easier (or harder) to traverse.

The first chapter of Harmonic introduces us to Gray City, and it's there we learn the ropes of gameplay as well as get a taste for where we can blaze a trail "off the rails". The second chapter opens the world up significantly wider. The three stages that make up the meat of the central part of the game, Ouroborra, Yig'Drasil, and Aum, will be open to the player's exploration at their own discretion. You board the Sky Thrasher, and after a brief introduction on each, make a decision on your destination and set off. From there, you must get through your chosen path before moving on to the other two (unless you smartly made a save point before deciding and want to reset the game, of course).

Completing a level will cause changes to occur to one or both of the remaining two levels. These are just as likely to make gameplay easier as they are harder, but in a way that should feel fair and justified to the player. Within the levels themselves, there will be multiple paths and multiple ways to finish the world's story. This all ties in to things you will encounter outside of these worlds of course, and the end game, too. If we haven't mentioned by this point that Harmonic Odyssey will feature multiple endings, consider this fair warning.

Keeping a game open-ended while still feeling like an RPG has been one of the tasks I used to dread when first conceptualizing how things would run and the systems that would push them along. These days, it's becoming a bit of a second-nature for me to build this way, and I almost doubt I could make a game where the player had only one path he could take. I do hope the effort will be as enjoyable to experience as it has been to create.

All that said, here are some things I am working on, currently, which you can expect in the final game as well as the next Demo update:

That's all that's on the agenda for this week. See you soon!