We have just launched our Kickstarter Campaign to give everyone a chance to Pre Order the FIRST BIONITE: Origins Single Player Mission Pack: Venus. There are also some really cool Backer Rewards that are only available to our Backers.

The BIONITE: Origins Single Player Missions are an ingaging and fun alternative to the Multiplayer version of the Game. All of the content available in the Mulitplayer version is available in the Single Player version. In each mission the pilot must command his wingmen strategically in order to beat the computer. Since the Single Player is based on the content created for the Multiplayer, were going to release the venus mission pack first. This will allow eveyone a chance to get familiar with how to drive the tanks and control the wingmen. We are almost ready to beta test our Mulitplayer version, in about 2 months.

We have a new 1080HD video of the EMZE Mine on venus and some great new footage from the first person view inside the Bayonet cockpit. There is alot of new information on the Kickstarter page about the Single Player game and what to expect to see when its released. - LtF 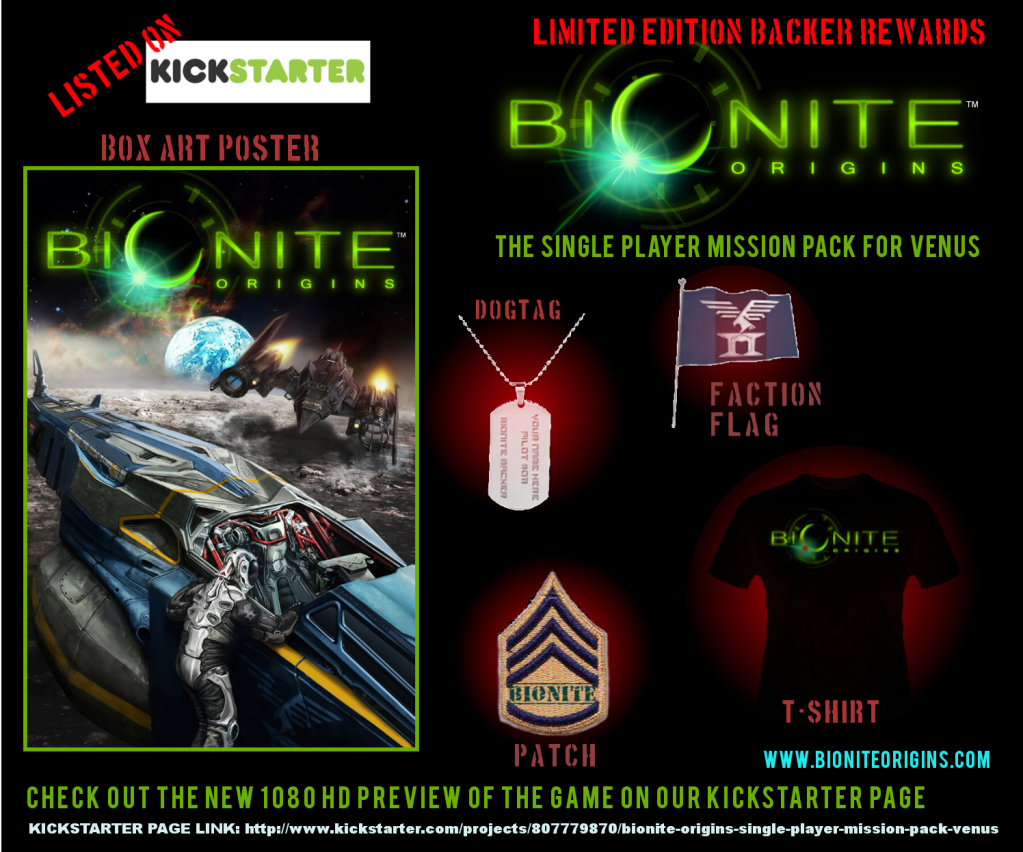 I'd love to help Kickstart the game, but I'm afraid I don't have any money to give at the moment - it's all tied up in bills, food, etc. :(

Also, it's really a pity the former marketing director for this game basically went and contacted everyone who tracked this game (and I suspect those who otherwise sponsored/followed the game elsewhere) and basically said, combined with an interview with a gaming website (see Indiegamehq.com ), "I honestly think BIONITE: Origins won't release because of teamwork and communication issues." What a 'nice' way of damning a project! Leaving the project might have been the 'right thing' for him to do, but why'd he have to do it to the determent of his former team-mates - especially since he supposedly maintains good relations with them?

I honestly hope that, regardless, the game will successfully release and be quite profitable - it deserves it in spite of what the former marketing director said.

Agreed, when i first saw that this project was in development as a "spiritual successor" to 98's Battlezone, i was all in this.

Were still working! It sucks, but these things happen when a community project becomes a business. The marketing director quit without notice and then the misinforming posts started. I am the Project Lead and there is no way in hell this project isnt going to get completed. I thought that someone who was my friend would at least have the dignity to quit without going out of his way to try and kill the project. The marketing director had absolutly nothing to do with the development of the game and his quitting has had no negative impact on our ability to finish it. THANKS for the support Expack! -LtFEED