Biomes are now in Isomer! Each generated world still have a main type (e.g. temperate, arctic or desert) but now can have a number of different biomes mixed throughout.

As anyone who has visited or voted (thanks!

) the previous thread will know already, Biomes are now in Isomer.

After careful tweaking of the random distribution code (for those interested, Isomer uses different forms of Perlin noise for a number of things like world features and shape) and pouring over many outputs from a variety of seeds and parameters from my noise visualiser test application (below) to get the right world construction, I finally arrived at a good mixture of world types. 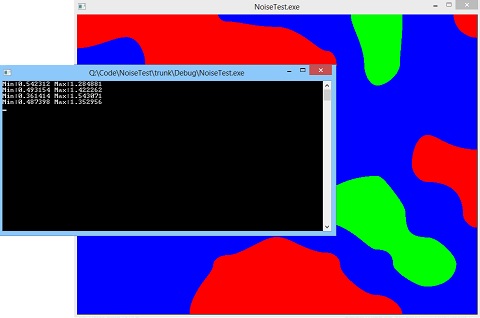 Each generated world still have a main type (e.g. temperate, arctic or desert) but now can have a number of different biomes mixed throughout. Here is what is looks like:

Different biomes don't just serve as a visual distinction to parts of the world. Various biomes have varying amounts of resources, for example - rare mineral resources (light blue crystal blocks) are found in much larger concentrations in frozen biomes than in deserts where they are very rare. Similarly the rate of growth of biomass plants varies between biomes with reduced growth rates in the arctic areas and massively reduced in desert areas.

Also changed is the frequency of all resources types through the biomes. Instead of being frequently occurring in individual blocks, resources are now more scattered but occurring in veins of several blocks. The deeper the resource vein, the greater the distance it will stretch.