Welcome to the third and final segment of 'Beta' Be Prepared for Beta'! Gameplay video included, get it while it's hot!

Posted by TheConjurersTower on Jul 10th, 2013

Welcome everyone and thank you for joining me today as I wrap things up before the Beta release. This time around I'll be discussing the new battle system, and I have put together a proper gameplay example video to show off the game's core mechanics in action. In case you missed the earlier segments, they're over this way: (Part One) (Part Two)

And here it is; An overview of the gameplay of Siege of Turtle Enclave Beta:


As you can see, the Beta is a quite an improvement from Alpha, with many fresh new features that bring the game more in line with the original vision of what it should be (plus all the changes made based on your feedback of course!).

On to the battles! Battles are now broken up in to distinct 'Rounds', during these rounds each unit's 'attack bar' will fill up until it's full, then the unit will attack. Depending on the 'Speed' of the units, some will attack more often each round and others may only attack once or a couple times per round. As a unit attacks, defends, and uses abilities, it expends it's Stamina, when the unit is exhausted it will suffer severe debuffs to attack speed and attack/defense power, Stamina is replenished at the start of each day (i.e. at the beginning of a new turn). When a round is over, the battle will pause and the player will be presented with a choice based on how each army fought in the round that just ended. If one side deals more damage to the other, the losing side may be driven back in the next round, and that army will suffer more damage because the victor will be invigorated. If neither side should gain an advantage then one army may elect to 'fall back' to gain a defensive bonus in the next round. But take care! If an army is driven back or falls back too far they will be driven from the tile! (Meaning battles can be won without having to kill all of the opposing army). During some rounds either side may have to opportunity to withdraw from battle and surrender the tile (like if you are seriously out-classed and want to save valuable units) or end the battle in a 'draw' where both armies will remain in the same tile. In between rounds, players will have the opportunity to return troops to their reserves and deploy fresh ones, (protecting worn or damaged units from further combat), as well as re-position all currently active units. There is also an option (which is on by default) to limit the number of rounds in a single battle to 5 rounds, after the limit is reached the game will decide if one side is the victor based on which army one the most rounds, the event of a very close battle will result in a draw and both armies will remain camped on the tile. Oh and before I forget, as units fight in battle they gain EXP when attacking or defending, the amount depending on their level vs the target's level, and their tier vs the target's tier. When a unit is killed in combat bonus EXP is awarded to the entire opposite army. When a unit collects 100 EXP they level up and gain additional HP, Stamina, Attack, & Defense. 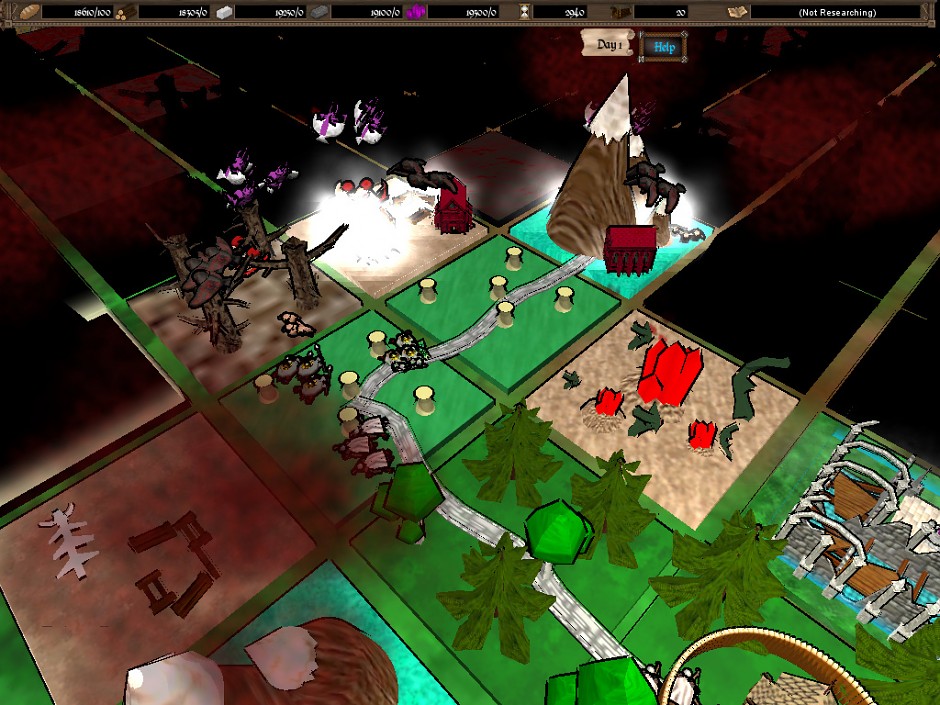 After the battle, if there is a clear winner, the defeated army will surrender the tile and if there are any surviving units in the defeated army it will move 1-2 tiles towards the nearest 'refuge', a refuge is a Barracks or Tower for the enemy, or a Citadel or the Enclave for the turtles. Purification or Corruption of tiles cannot be initiated until the tile has been cleared of opposing forces. Once initiated however, the tile must be cleared of enemy forces to stop the process (simple occupying the tile with the enemy won't stop corruption once it has been started).

All that having been said, I can state with some confidence that the Beta should be released at or around the end of this month or the beginning of next, and I'm super excited for all of you to start playing it! So stay tuned, hopefully the next announcement that I'll be making is that the Beta is out and ready for action!

Thanks so much for reading, I'd love to hear any feedback or questions you might have, take care and have fun,
~ Heftig