Banner generation and the upper floors of castles, alongside just a small AI update (although massive work is being done).

Posted by UltimaRatioRegum on Jan 31st, 2016

I was hoping for a large scheduling/AI update this week, and although significant progress has been made, the game’s code is currently quite unstable and uncooperative for the taking of screenshots, and replete with bug-tracking code that slows the game down to a crawl and makes taking nice gifs quite challenging. So, rather than doing a scheduling-and-other-things update this week and the same next week, I’m going to do a brief other-stuff update this week, and a much larger scheduling update next week with a massive volume of screenshots. Aside from the improvements to scheduling, two small other things have been done this week – banner graphics, and the upper floors of castles. That’s all for this brief post, I’m afraid, but we’ll make up for it next week with a massive and more tech-focused AI entry.

I’ve generated the graphics for banners, which are somewhat like flags except they can only be found inside castes, and probably inside mansions and manors as well once I get around to adding them in. In castles, in vassalage nations, you will always find a corridor lined with the banners of all the lesser houses in that nation. Here are some examples (the frills at the bottom of course vary with civilization preference shape) – these are quite simple, but I’m very content with how they look, and that’s another one I can tick off the list of the last remaining graphics for 0.8. With that said, they might be just a little dark, so I may lighten them just a tad.

I returned to the upper floors for castles and made some major changes, almost entirely in order to just make them less boring, as they were looking rather uninteresting beforehand and a bit too hand-made. The system used here is again (like castle basements for slave quarters, dungeons, etc) quite similar to the algorithm used in crypts to connect areas and draw corridors, and so forth, but this one is rather more fluid. It places all the important rooms first, including a harem if appropriate (the new dark red icons you see there are the reclining couches we talked about last time, and their colour varies according to the coat of arms of the house to whom they belong), and then ensures they can all path back to the up staircase that brings you to that level. This first stage results in something that looks like this: 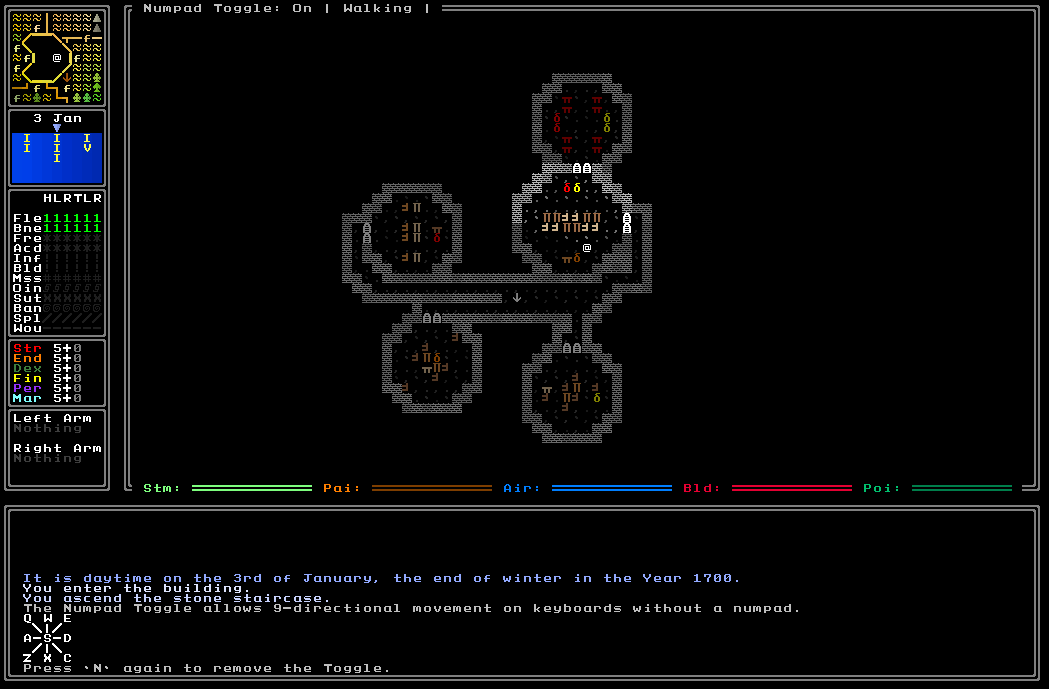 If the castle is smaller and there’s a garden in the centre of the castle, you get something like this, since it’s rather harder to generate appropriately – but I actually rather like it! You’ll note that in this case the harem is not placed directly adjacent to the master bedroom, since in many cases that wouldn’t fit, but is instead positioned at a distance with a corridor that then paths in to the main sequence of bedrooms. This gif nicely illustrates the gap in the centre for the octagonal garden in the middle, then the player goes upstairs, and you can see the rooms loop around the middle bedroom.

I’m content with how these look – as ever, it’s hard to make upper floors fascinating when there are only so many ways to draw a bedroom, but they’re distinctive, they get the job done, and leave plenty of room for me to potentially add other things in the future, if anything useful presents itself. So now here’s a little gif using wizard/admin mode, to look at the three layers, from top, to middle, to bottom, to middle, to top. Note also that the corner towers where guards and soldiers live are present on both the ground and upper floor, but the overall shape of the castle is irrelevant underground.

And lastly (I just added this at the last second before posting this entry), here’s an upper floor for a democratic civilization that doesn’t have an ornate throneroom on the ground floor, but rather a bedroom with two sections – one for general governance and receiving relevant people, and a secondary part for the elected ruler to sleep in. Like ground-floor throne rooms, they vary heavily based on ideology, but in this picture you can see it in the top-left corner of the circular castle, and the middle of the “cross”-ular castle, both of which have harems attached (although roughly 1/3 nations will have those, I temporarily activated them for all nations just to help me test the room-placing algorithm). 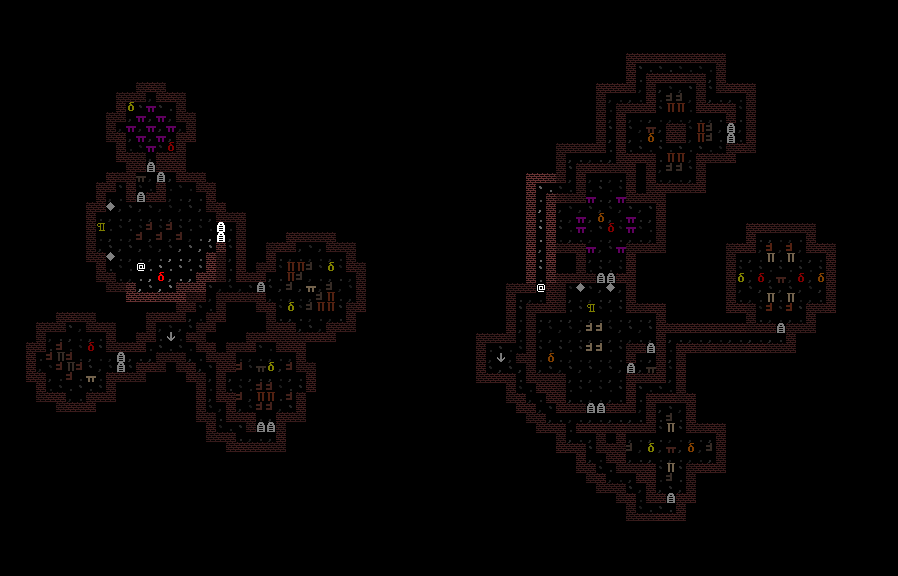 Oh, all right – one brief AI thing. The best thing I’ve seen all week is this debug screenshot, where guards were coming in and out of a mint from all directions and timings and data structures, and sure enough, they all showed up on time (displayed here as the white tiles) and every single guard was there, no matter what the player had been doing and what parts of the game world were spawned and loaded, spawned and unloaded, or unspawned and unloaded. The most beautiful image I’ve ever set eyes upon.

Moving closer to all this AI work being finished! I cannot wait to be done with all this and be able to watch all the important NPCs going about their days. Once all of this is done, and all the current minor bugs (~a dozen) are fixed, I’m actually going to take a week or so off from URR development. Honestly, the extended crunch to getting this AI stuff finished has been really tough and lengthy, and once it’s done, I’m going to recharge a little bit before I start work on dialect generation and the conversation system (though I will probably continue brainstorming those aspects in the interim). I have a particular game I’ve been desperate to play for a long time, and having finally acquired (second-hand) the console required, I’m actually going to give myself a little time off to play the thing. Don’t worry, blog posts will of course continue! But I do feel a little burnt out for the first time ever, and I just have to have a little coding rest once this huge block is finished, so chances are next week will be “AI is almost finished”, the week after will be “AI is completely finished!!”, the week after will be something else, and maybe even the week after that, and I know this will push back 0.8 a tiny bit further but I just really need a bit of a break. Once that’s all done, though, we’ll start thinking about dialect generation. See you in a week for a big AI update!

Amazing work, but don't burn yourself out! Have fun with that game :)

Haha, thanks! I have to say, I am looking forward to it very, very much...