Taking a look at the new missile interceptors, shield effects and the new requisition system, which allows the player to command his own fleet.

With having to split time between programming the game, creating the art assets and trying to get the game out there while juggling a family and a full time job, time is a rare commodity these days! To try and make more progress in the actual game, I’m starting a monthly column of development highlights, showcasing the new stuff that is making its way into the game.

Until now, the player was always given three gunships to assist him, which was extremely useful in the beginning of the game as it provided a way to even the odds against hostile fleets. However, as a game progressed, the allied ships would become less as less useful as the player began tackling harder factions, the little gunships finding themselves turned into space dust without really contributing anything to the battle.

The new requisition system targets this issue. As the player is part of a greater Empire, he can now request that the Imperial Headquarters provides additional ships to his fleet. This bringing a kind of currency to the game, Requisition Units, which can be earned both by conquering sectors and by keeping them under Imperial control. 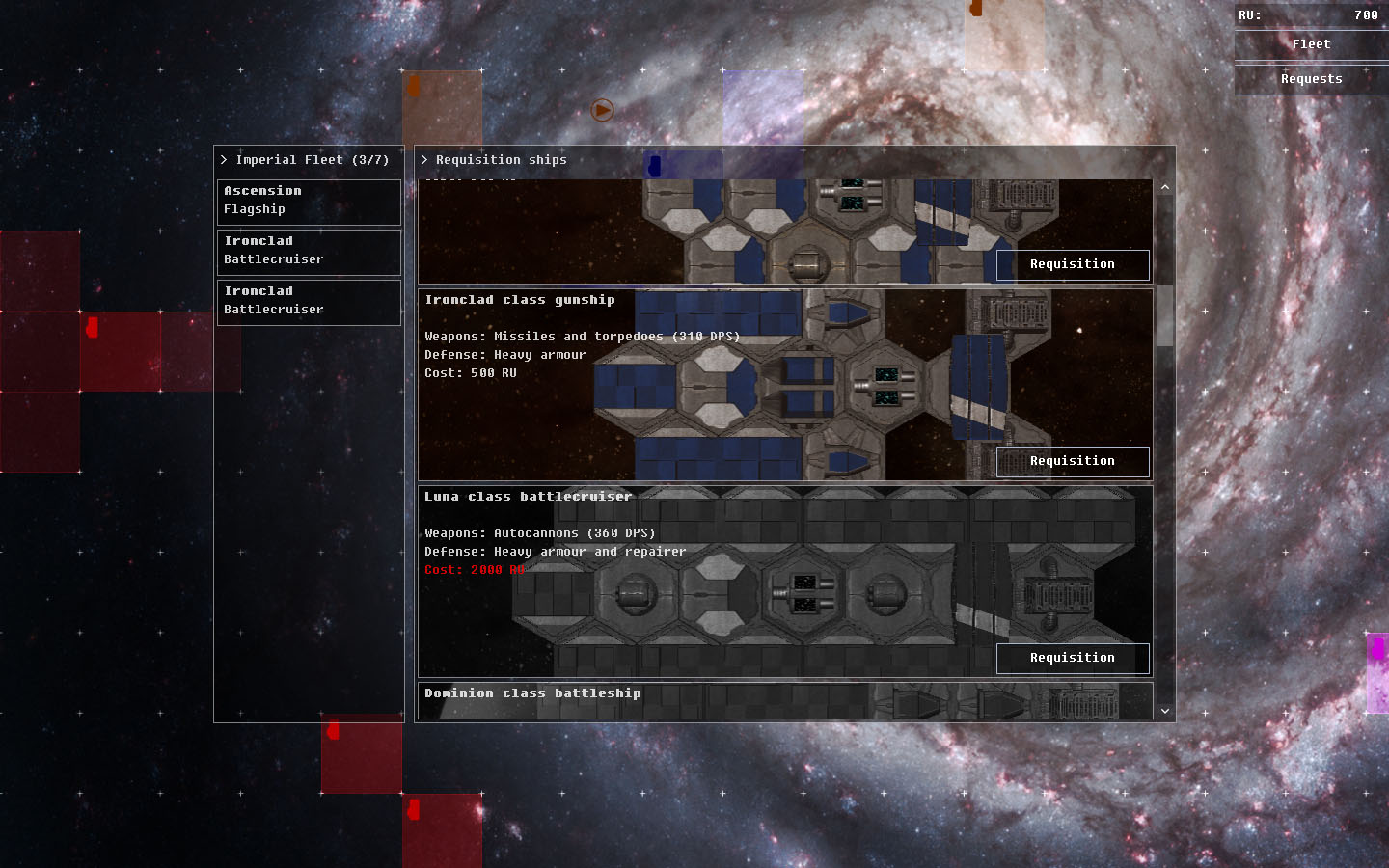 In Tannhauser there are several kinds of weapons but of all of them, missiles in their many variants can be some of the most difficult to counter. Particularly as the size of ships grows larger and armour gets heavier, dodging out of the way of torpedoes becomes as difficult as negotiating the Greek bailout. To assist a Captain who finds himself on the wrong side of missile barrages, the new missile interceptor module has been added, which will attempt to shoot down nearby missiles as long as there is enough energy to power it.

In combination with the Requisition System, it is now possible for the player to request ships which are dedicated to this role if so desired. In the end, the balance between defence and offence is delicate and the new Missile Interceptor provides a much needed alternative to keep your fleet intact.

In their basic setup, shields have been around for a while. But there have been some tethering issues such as impact positions not actually being completely correct (although it is quite likely no one would have noticed!) and, perhaps more importantly, the fact that I hadn’t been all that happy with how the shields looked. So I’ve made a few changes, tweaking the shader and adding proper texture mapping and further animation into the effect. I’m quite pleased with how the new version turned out and it is likely this will remain unchanged until the game is released:

There are only a few new module types I want to add, although on the art side there’s still quite a bit to do. In September I want to get the proper models in-game for the Armour Repairer and Shield Generator. With those done, I’ll be looking into getting the Rocket Launchers functional and all ships in the Requisition System up and running.

Finally, there are two large systems that need to go in: sound effects and the mission generator, which will be the “big one” and essentially wrap-up all of the game’s systems, as well as giving the player a clearer purpose in the wider galaxy.

Thanks! Can't wait to have the game out there :)

Hi! When you will release the game ?

Hi cof3ina! Apologies for not replying earlier, didn't get a notification. I'm aiming at March / April next year through a Steam release :)

Oh my those shield effects are gorgerous! Also hexagon (What some people call honeycomb) shape is absolutely my favourite!

Thank you! I'm quite happy with the shield effects, really makes the big fights impressive. As for the hexagonal shapes, it was probably the best decision I've ever made in this game, it makes it so much easier to customise ships and create new content :)