Today marks possibly the largest update for Apocalypse Not ever seen. If you have yet to try out this free Alpha, now is the time to do it before it reaches Beta. Especially with the game now being offered for MacOS, there has never been a better time to do so. Come see why this game has been maintaining its spot in the top 100 new indie games on IndieDB.

Amazingly enough Alpha v0.0.21 was released today, 3 days early, and with more content than ever before. This new version boasts completely altered terrain, providing a far more realistic feel and mood than previous versions. If that wasn't enough, a new handgun, a new building, new spawn mechanics, new difficulty settings, and new rag doll physics for zombies was also added in. And these are only a few of the spectacular new changes to Apocalypse Not this week.

The new building that was added to this version was the farm, it's an eerie area complete with run down barn and tall corn fields for zombies to hide. It will be necessary to control these areas however, as they will soon provide the food to sustain your army of survivors. 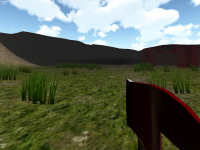 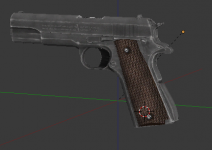 Of course what kind of update would be complete without mentioning the all new M1911 handgun as well? It packs less punch than the 9mm Beretta, but it makes up for it with increased accuracy.

A more detailed look at these can also be found in the videos here, demonstrating many of the new features.

A full list of changes for the new version is below and if not already available on IndieDB, the game can be found on the official website. The Apocalypse Not Kickstarter is also still trying to raise enough money to buy the full version of the Unity Engine and make this game even better. So if you haven't checked that out yet, you should. Donating a mere $20 grants you a full copy of the game upon release and $35 gets you into the closed Beta beginning this October.

Very nice. Tracking. Only, a 1911 does more damage than a Beretta, as it is a larger caliber. It is also less accurate. At least in real life.

This is a true statement and I will be correcting this in the next release. Firing the 1911 in-game already does provide a bigger kick though.

I'm not trying to copy DayZ. This is meant to have a sense of purpose, not just a sandbox type make your own story kind of thing.

Is this SP or MP? Tracking to, would be able to pay for a game like this :) or atleast use adfly to download :)

Why would a 1911 pack less punch than a 9mm? It's a .45 which is a much larger round. It should pack MORE punch with the larger hole it's going to cause.