It is time to talk about one of the most important questions when talking of open-world games: How big is the world? how big is Saint Alice? also i show a small preview of the progress done in the last few days.

Well i wanted to make a second update to the blog before the new year and i do have a few things to comment about the development of Saint Alice. Firstly i have been making some solid progress in a few regions of the game, one of them in special that had been in "stand-by" for quite a while. Again, i dont want to show a lot so people can discover the peninsula with their characters but i suppose that a few previews wont hurt the experience: 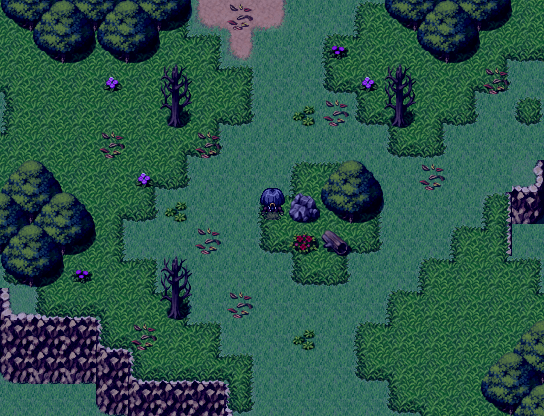 The first one is inside the biggest forest in Saint Alice near a mercenary outpost protecting... well you will probably discover it during the game, the second well its just a random screenshot of the forest. But well i mainly wanted to take the opportunity to talk about a very important aspect in every open-world game, how big is the world? how big is Saint Alice? well, below there is a mapshot of a "map" one of the zones that composes the peninsula of Saint Alice: 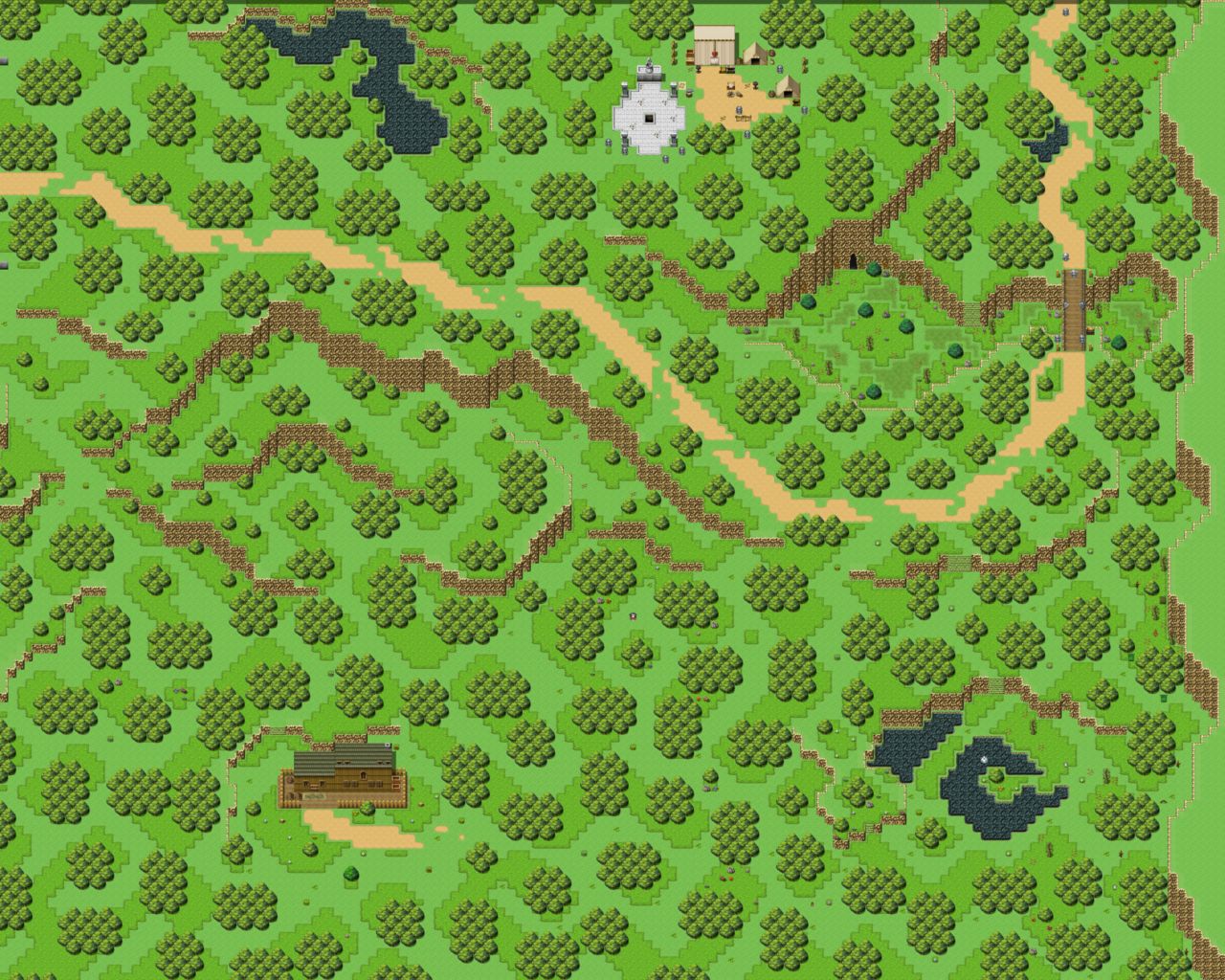 There is a few characters on the bridge and one on the north end of the parth so you can have a rough idea of how big it is, well the landscape of Saint Alice is composed of 27 of those maps, for the landscape alone so it doesnt count interiors or even cities and settlements, the road from a city or town to the nearest settlement is generally 3-4 of those maps long so i think that you all can start to have an idea of the size of Saint Alice, exploration is an important aspect of the game as any open-world game and we have a game world that spans over four different regions/biomes and a various "dungeons" and landmarks to explore and find, if you are like me and enjoy getting across that "hidden" location or that odd landmark while travelling to any other place, then i am workig for you!

But, how much of the world is already done? well currently we have 8 completed maps, 1 basically done and one i am working on so that basically makes 10 maps that are already there. To be honest the "completed" maps arent technically completed as they still need to have details/decorations added but thats a process that i plan to leave at the end of the completition of every region so every part of each region can have an uniform look.

Now just to end i want to show a little bit of my progress with the cities in general, i love to work in the landscape, interiors and all that stuff but cities have been a headache for me, still i think i have done a good progress specially if you compare one of my earliest tries (right) and the most recent one (left). there is a world of difference. But this is just a test for now it isnt intended to be one of the cities or towns of the game, i am just testing although i really like how it looks. 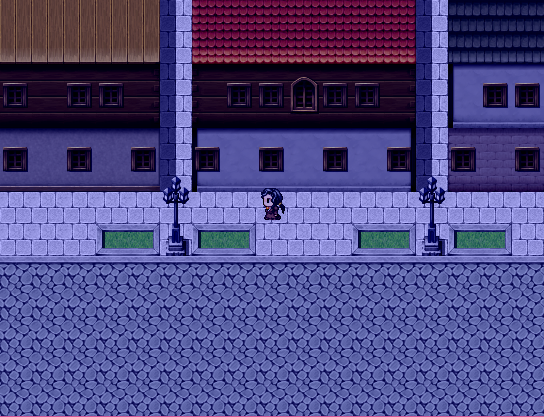 Nice, there is cleraly a vast improvement on the city. It is much more alive, more details etc. Whenever you get stuck it is advisable to make a trip to a real world city and note all the details that are there.

Regarding the open world or rather the vastness of it: this is huge, it will make nice place for discoveries. I always enjoyed this part of RPGs where I wander lost through a jungle and discover a hidden treasure (I think Gothic did a great job there). My fingers are crossed you can pull this off in a right way, where the world doesn't feel empty, is somewhat distinguishable (for easy navigation) and is not used for hundreds of long fetch quests.
Are you thinking about a fast travel option? In my opinion that almost always ruins the open world experience because it completeley erases the sense of vastness (compare our sense of vastness of the planet earth in times of horse carriages and times of planes).

Thanks, well about the world I like to play with the balance between the different locations, landmarks and the rest of the landscape. I don't want the world to feel too cluttered but neither too empty and my intention is to make the flow of the navigation through the landscape feel organic and not like an obstacle between the player and the different locations. I hope i can créate an experience where the player enjoys the journey as much as reaching his or her destination.

About the quests I can say that I am having a great time developing the different characters inhabiting the peninsula, that along with the lore that Saint Alice is part of actually makes the process of creating diverse quests easier without having to stuff the game with fetch quests like "kill "x" amount of those" or "collect "x" amount of "y". As of right now there aren't quests of the type in the game.

Referring to the fast travel, I have never liked it as I feel that it can break the immersion and well immersion is a very important aspect that I want to achieve with Saint Alice. There isn't a fast travel mechanic like in Skyrim where you just select a location in the map and then you are taken there immediately but there are carriages in every city and town that can take you to any of the settlements for a fee. So if the player want to reach a specific location in the wilderness the best the carriages can do is to take you a little closer but you will still have to make the journey from a settlement to whatever place you intend to reach. Also travelling in carriage isn't going to be cheap.

Glad to hear it, that sounds nice. I thought a lot about the problem of navigation in a big open world. The best experince would be only to travel by foot, experience the distance through time. But the bad thing is that players nowadays are not used to that (not their fault...) and will get impatient.

My only solution for that so far, is to make a journey through the world but only in small steps (the next quest is not that far away), so the player gets to know the world bit by bit and there will be no need to use fast travel etc. (a few occasional long distance travels would add to the atmosphere). In the end of the game he may return to his starting point and realize how huge his journey was. Of course this would counter the idea of an open world a bit. But I think some games do a terrible job to show the vastness by sending the player to the leftmost edge of the map and having him to return to the rightmost edge to fulfill a quest.

Anyhow, I will follow the progress on Aint Alice!

I agree with your points,I think that for example Skyrim is a big offender in some quests that force the player to zig zag through the whole gamemap to complete a questline, a few of them can make a quest have certain feeling of epicness but when overused it only becomes annoying for the player.

I think that the idea of a quest that takes the player little by little through the peninsula is a pretty good idea to make people get to know the world but I think that a quest which sole purpose is to show the world to the player can feel a little "artificial" still it is an idea worth to considerate, I might add a quest of that kind at the start of the game.

How I see it at the end one should ultimately give the player the freedom and tools to choose whatever if he wants to explore every corner of the world or if they prefer to stay always near the road for example, I am ok with the idea of some players playing safe and preferring to stay out of troubles and I am building the game in a way that someone could live, very modestly, inside the safety of the settlements without going into the wild but exploration will always be more rewarding than I don't know, trying to do a living making and selling weapons for example, but well the option is there.

Also good to know that you are following the game now!