Post news RSS Afraid of NSA's PRISM? There's a Game for That!

At Zorean we are developing a real-world forensic adventure game called Mark Lane's Logs: Project H.U.M.A.N.. We would call it a Forensic Alternate Reality Game (FARG). The game features an entirely new format and gameplay:

You start with just a SMS message from Mark Lane. From there, you have to reproduce Mark's steps, find what he found, and live a discovery adventure just like he did. The game depicts the real world and is based on real-world facts and places. You'll feel you're uncovering a real case. Besides being heavily based on real-world facts and news, it's highly visual. Hundreds of photos taken by Mark will let you revive his adventure as if you were there.

The game is still played on a computer device, but there is no software. You are enticed to take the challenge and go out to cyberspace looking for things that will help him discover and solve the case. The truth is somewhere out there, on the Internet. You're out in the wild. The Internet is millions of times bigger than a computer game sandbox. It's a kind of 21st century treasure hunt, but much more complex and massive, with hundred of items to find. All this mixed with cryptography, problem-solving, forensic work, intertwined with a strong narrative featuring a hollywood-style plot with some surprising twists.

During your forensic adventure you'll bump into some apparently random strings of characters. These are probably secret messages encoded using some sort of encryption. You might need to decrypt these messages to progress. However, at the beginning, everything is unknown to you. As you progress in the game, you'll learn how to build a simple, yet powerful cryptographic device. Here's a glimpse of its wiring: 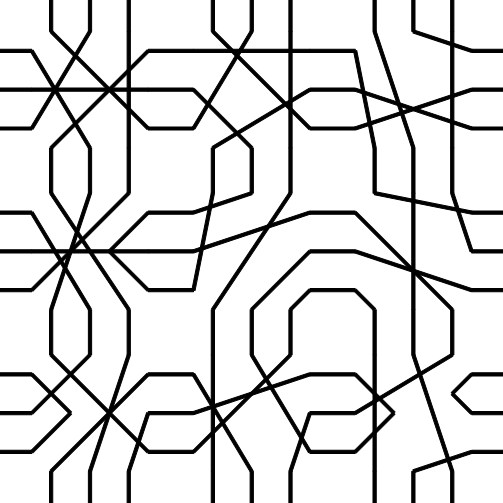 This is all we can reveal before the game's release. The device is comparable to the mythical German Enigma machines of World War II: It's a symmetrical, evolutionary substitution cypher. But while the Enigma machine had a universal, constant mechanism, this cypher's behavior is variable, adding another layer of secrecy. Its design can be changed to create more powerful variations.

So, an additional bonus of playing this game is to learn to build a new, original crypto device you can actually use in real life.

The challenge is slated for release on September 27. Watch the game here on IndieDB!

Mark Lane, retired CIA agent, is forced to carry out one last mission: dismantle an elusive terrorist organization, infiltrated in the American military, including the CIA. A yet-unknown, swarm-type destructive device is being developed, right under DoD's nose using its own resources. An attack on US soil is imminent. Mark carries out a solo worldwide intelligence mission to eliminate this threat. However, he will find more than he ever expected. A secret society. A federal conspiracy to steal the Pentagon's ultimate weapon. He is betrayed by those he trusted and is set to die as a traitor to his country. He dodges his fate by escaping, but is fiercely hunted down. He has nowhere to go. You're Mark's last hope. He left a trail of evidence that you must uncover. Find out what happened, collect enough evidence, and bring the case to justice.