2015 has come to a close and we share what we have been working on throughout the past year.

2015 has been a big year for the Battlecry team and we thank all of you for your great support from the start. This is such a fantastic project that we all enjoy working on in our free time and can’t wait to share it with everyone.

This year we made a lot of progress on every part of the game and released our first video showing off in-engine gameplay on our Cloud City map. We were incredibly excited to show everyone that what we've been working on is real. We decided a video was the perfect way to demonstrate that.

Since the last update we have made massive changes to the layout of portions of Cloud City to improve how they play. Specifically, the outside of the map seen in the video above is no longer wide open and somewhat reflects the design of the Bespin: Platforms map from Pandemic’s 2004 Star Wars: Battlefront game.

The HUD effects have been tweaked to look more holographic and improve visibility. We have been working on improving all of the existing character animations and creating new ones. Bugs and other critical issues that needed to be fixed in order to implement new features took up a considerable amount of our time.

We have been experimenting with new technologies such as virtual reality and we would like to announce basic VR implementation in Battlecry along with 4k support. Examples of which can be seen below: 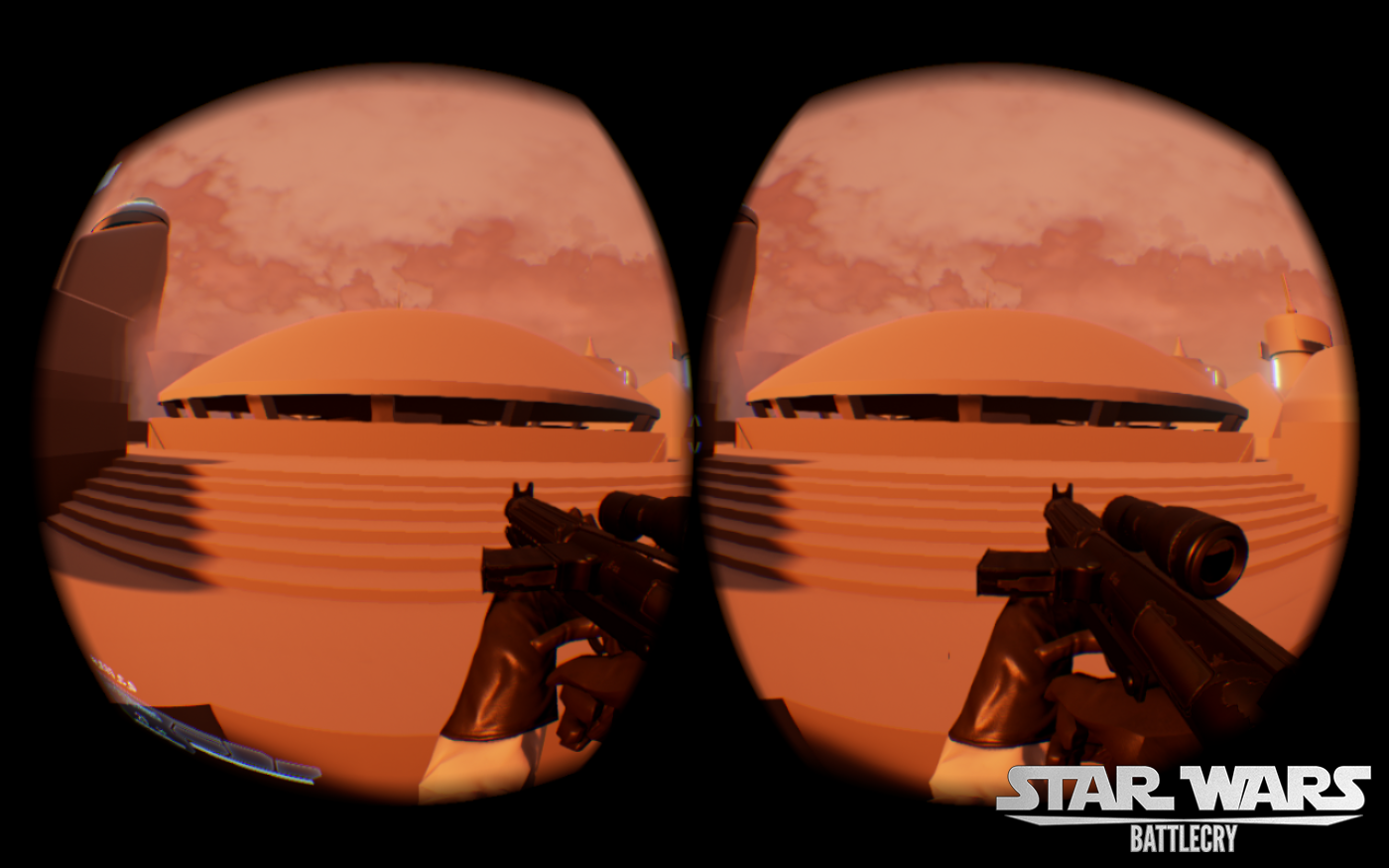 On December 23 we launched a brand new design for our community forums. Every single part of the forum has been retouched to have a consistent design and fix all known issues. Usability was improved on both desktop and mobile by making the design familiar to those who have used other popular forum softwares in the past. On smartphones the forum can also function like an app on both iOS (Safari) and Android (Chrome) by adding it to the home screen. 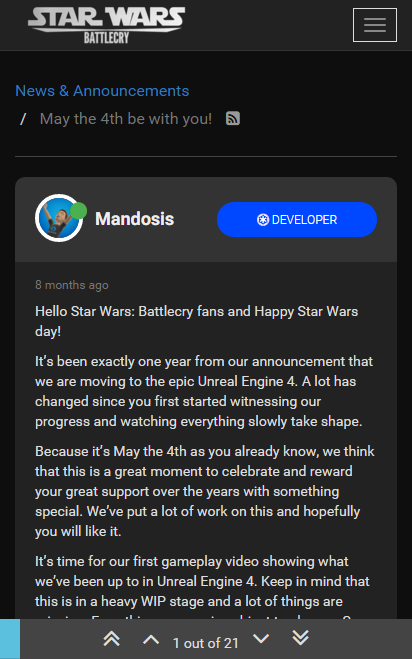 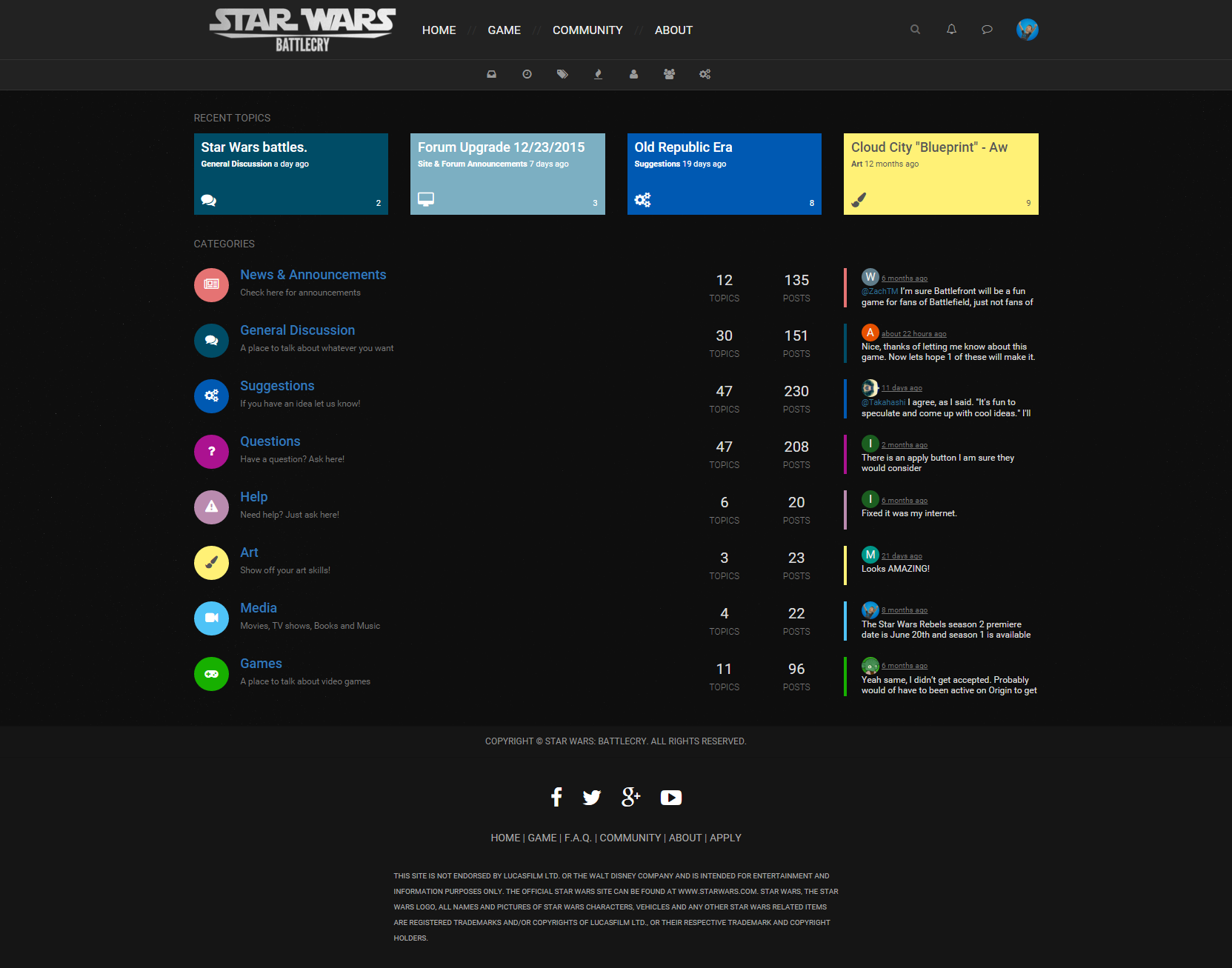 Indie of the Year Awards

We can't forget to mention the 2015 Indie of the Year awards. Thanks to all of your support, we made it into the top 100 games on all of IndieDB! It was an honor for all of us to be among so many great indie titles, but made us realize we have a long road ahead of us.

We can’t go without some new year’s resolutions of course. First of all we are going to continue to make progress on the game to get it into a fully playable state.

This past year we have not communicated as well as we have in the past. After the video we released showing some very early in-engine gameplay, we may have set the bar a bit too high for the amount of content needed to publish a new development update. We are aiming to communicate more with our community and have less of a gap between updates.

We are looking for more people to help us continue to make this game a reality. If you or anyone you know would like to help, please apply at Swbattlecry.com.

We are always looking for:

Even if you do something different please feel free to contact us! We may not always respond to everyone, but we always make sure to read everything. We apologize if it seems like we have been ignoring anyone.

What a year 2015 has been not just for us, but for the Star Wars franchise as a whole. A new Battlefront that is a blast to play despite some minor issues and the long awaited Star Wars: The Force Awakens! We can't wait to see what will happen over the course of the next year…

Happy New Year and may the force be with you,
The Battlecry team

The game was already looking good and now you have 4k support, you're spoiling us!

I assume the goal is still to finish Cloud City and maybe release some kind of demo? Things look great! Happy New Years :)

Great to see you are still alive.

You say you need some more devs. I can program c++. I wouldn't say i'm a pro, but good enough for a tutor job at my university. How much time do i need to spend to this. Do you have some more information about the work??
What kind of software do i need? I use Visual Studio Enterprise or Qt Creator for c++.

They are using unreal engine 4 it uses Microsoft Visual Studio 2015, just apply with your credentials and be able to give a couple hours of work each week.

Ok. I get to the exam phase now, so i won't have much time. But when i'm done i'll write you on swbattlecry.com.

I'm amazed Disney hasn't come down on this mod like a ton of bricks (touch wood) best of luck guys!

They've covered this issue a few times, I think they worked out that as long as they make it clear it is not related to the official Star Wars universe then Disney are alright with it. Personally, looking at the artwork and years of work they've put into it, I wouldn't be surprised if they don't get hired to work on an official game in the future if it's as good as it looks.

Wow guys, this is amazing! Love the Carbon Chamber screenshot, new wallpaper material now it's in a good quality!

Glad to see a new update! Looking really good so far, especially with those pretty 4K!

Please tell me this'll have lightsabers :3 It isnt star wars until theres lightsabers