On June 18th 2016 Urban Pirate was released on Steam and Humblebundle after having been developed by BABY DUKA for almost a year.

Welcome to the released and final version of Urban Pirate. Today we're looking at version 3.0.0.0 which already has some fixes and corrections to it. Urban Pirate is FULL of cool and strange mechanics which needed a little polishing, we must admit. That said, the gamers who got their hands on the game really have been supportive, positive and excited about the title.

The world of the Urban Pirates might not be for everyone. Of course there will be modern gamers who like the crime theme but don't have the time to play the adventure game/strategy element where you will play one level for 1-2 hours before slowly progressing and perhaps finding out that you should've maybe been planning in different ways. Urban Pirate is obviously a treacherous landscape to tread with little assurance of success, yet if you really think carefully there is always a way out, even though it might not be obvious at the time. That is not only an important mechanic in the game but also the philosophy of the very game design: to draw in gamers who truly enjoy discovering themselves and a game through choice, resource-managing and logic.

That said, if you get the hang of Urban Pirate you'll learn to play faster and be more intuitive when it comes to quickly managing your resources and avoiding (too much) trouble. The game is a slow game in the beginning, and slowly the curve changes with the story and your skill and perception.

Now that the game is released on Steam and the Humble Store, and loads of players have gotten their hands on the game, we're beginning to see the very first Let's Plays which, honestly, is one of the most important reasons we make games :D

The game has gone through some huge polishing stages while keeping all the cool of the chunky and raw style of the alpha and beta. Bright colors, sharp edges and a soft sense of humor is the recipe just now. Also sound producer and engineer B. Magic Samples stepped into the game already back at the beginning of the year and has worked very hard to create the entire pack of original sound effects as well as a good part of the musical soundtrack. Some might play the game just for his sounds...

(alpha to beta polishing and redesigning)

Because Steam, IndieDB and many other outlets are so mod- and update-friendly we can offer the user/gamer a one-time fee for a game in constant development! Look for new skills, new tactics and mechanics in future updates. Visit the Steam Workshop and propose new features to be added.

Follow us on Twitter to get the inside news as well as giveaways and more. Visit the game's website and get an overview of the essential links.

We are truly moved by the number of gamers and fans that have supported us since the beginning and Urban Pirate is clearly something that falls right into the hearts of all the ones that we hoped would get the humor, the style and the story! 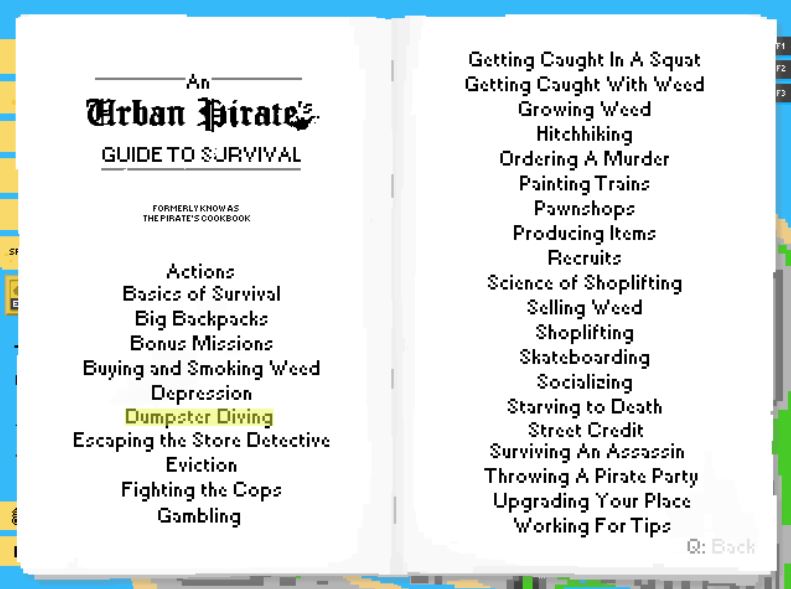 (An Urban Pirate's Guide to Survival - the photocopied version)